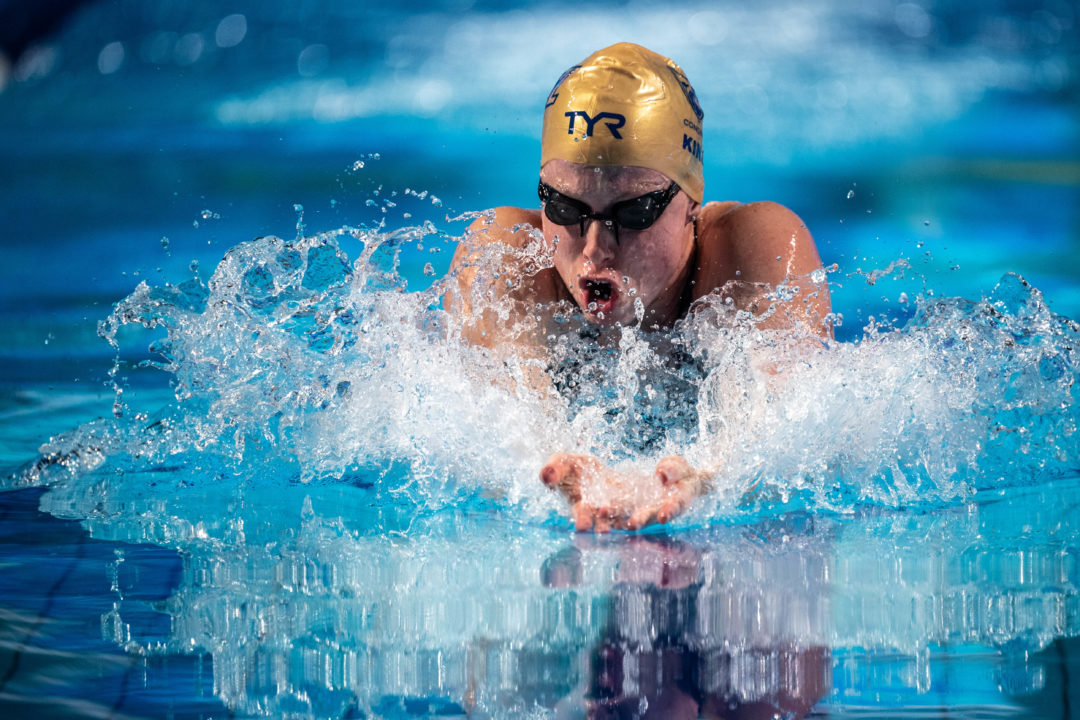 Lilly King was the Queen of Jackpots on weekend 1 of the 2020 ISL season, stealing points in every individual event she swam. Current photo via Mike Lewis/ISL

Thanks to swimming’s best statistician, Barry Revzin, for compiling the numbers on this.

The newly-introduced Jackpot scoring had mixed reviews after the first weekend of competition in the 2020 International Swimming League season.

The most universal criticism was its application to the ‘skins’ racing, which allowed Lilly King and Ryan Murphy to overwhelm opponents, take their points, and take their money on match 1, though ultimately was much less impactful in match 2.

In terms of the non-skins races, some people liked it, some people thought the bar was too low, and some thought it was too confusing, though added CBS graphics for match 2 did help a little.

But we wanted to know what impact, if any, they ultimately had on the final team standings. And, ultimately, as expected, they didn’t change the final order of things, they just grew the gaps between the best teams and worst teams, as well as the best swimmers and worst swimmers.

There were far more jackpots throughout the meets in the sprint events, where in spite of the margins being the same percentage, the actual time gaps are much smaller.

At this stage, there are really only minor changes that teams can make to try to capture this. But, this offseason, we’re going to see this play out in the recruiting process in a big way. Well, we won’t really see it play out, because the recruiting process is always kept so secretively, but athletes are going to find that, if there is a true free agency as was planned this offseason, swimmers who can win races and Jackpot points are worth whatever money is thrown at them, and the rest of the swimmers are all worth about the same. If you finish in 5th place and get your points Jacked, even if you beat the 8th place finisher by 3 seconds, you both scored exactly the same amount of points: 0.

The most brutal example of this is Joe Litchfield of the New York Breakers, who was good enough to qualify for the final of the men’s skins event in his race, but because he was Jacked by Ryan Murphy in the final, lost most of his potential points and money.

There was some reported concern within league management last year about the lack of “professional efforts” in certain races, thus instituting the Jackpot penalties, but even once they were instituted, the Jackpots happened with such regularity so as to make that justification a head-scratcher.

What we might see now is teams pulling 6th-place capable swimmers out of races and replacing them with 8th-place swimmers, saving the 6th-place capable swimmers for later events where they might get 4th. Don’t be surprised to see this come up, for example, in the women’s 50 breaststroke, where teams might pull good swimmers from the race, because they’re going to get Jackpotted by Lilly King anyway, and save them for the medley relays, which have such a huge implication in scoring because of the bonus choice of skins stroke.

I’ll be the first to acknowledge that, in general, the ISL format is much more fun to watch than most of what we’ve seen. Fewer gaps between races, a concept where the finish order matters beyond just the “medalists,” some motivation for team scoring – these things are all good for swimming.

But, in the first two seasons, almost every institution within the league dis-favors parity.

The fact that every swimmer was paid the same amount this season hurts parity, because swimmers have no motivation to sign with a weaker team for a higher guaranteed salary.

The fact that every athlete can sign with whatever team they want every season hurts parity.

The amount of extra money that can be made by being on the best team in the league, hurts parity – even moreso last year, where teams were able to recruit based on “yes, we’re paying you substantially less in salary, but the bonus for winning more-than-makes up for it.”

And now with the addition of Jackpot times, and the early impact that’s having, just the sense that the bad teams don’t really have a snowball’s chance of moving significantly up the rankings.

This could be a difference in the mentality between American sports and European sports, with most of ISL’s management being European-based. In American sports, most of the institutions are established to encourage parity. That includes things like salary caps and entering new athletes into leagues via a draft system that reverses the order of finish from the prior year, so the worst teams get to select the best new athletes.

Parity is crucial in American leagues, because without promotion and relegation systems that are so common in Europe, you’re asking cities to build billion-dollar stadiums, and often give those stadiums away, and so you need for them to have some promise that their team might be good and that those stadiums might be full one day.

In European leagues, while there are some mechanisms for parity, they are weaker. That’s why we generally see the same 6 teams at the top of the English Premier League year-in, year-out, with other teams having to take moon-shot chases for titles, before eventually settling back to the middle.

With promotion and relegation systems in place, which, by the way, I think are a lot of fun in principle, the English Premier League, the Italian volleyball league, and other such leagues are motivated to set up mega-teams that are definitely staying at the top, and that will have big followings regardless of where in the country they go.

Here’s the difference, though, and why the ISL, in my mind, should follow more of the American parity model:

There is only one professional swimming league.

In Europe, all of the best players don’t play in the EPL, or in the Russian Volleyball Super League, or in the Hungarian Orszagos Bajnoksag men’s water polo league. They’re split among leagues in different countries, so there’s some added value to stacking teams and having them progress to the European Champions League system and excel there.

And that’s the problem that the ISL could face. Maybe not as much the risk of a ‘competing league,’ per se, but the risk of no longterm buy-in from second and third tier athletes who could go to FINA meets, or national meets, or simply retire from swimming and make more money than they will in the ISL.

“but the risk of not longterm buy-in from second and third tier athletes who could go to FINA meets, or national meets, or simply retire from swimming and make more money than they will in the ISL.”

﻿This final point is spot on and in the end hurts good but not great swimmers. 7th place swimmers need to get points so they have value to the team, even if it is minimal.

And this is one of the biggest reasons I was so excited for the league. I wanted swimmers who are very good but not necessarily Olympic medal good to be able to make a living off of swimming, and hoped this format would help with that. The jackpot times seem to go in the opposite direction

This basically means we’re going to end up with around half the heat fighting for the win/jackpot, while the other half of the heat is just resigned to getting jackpotted right? That doesn’t seem like the kind of race anyone want to see. I really don’t like this rule, especially since the money earned gets stolen as well.