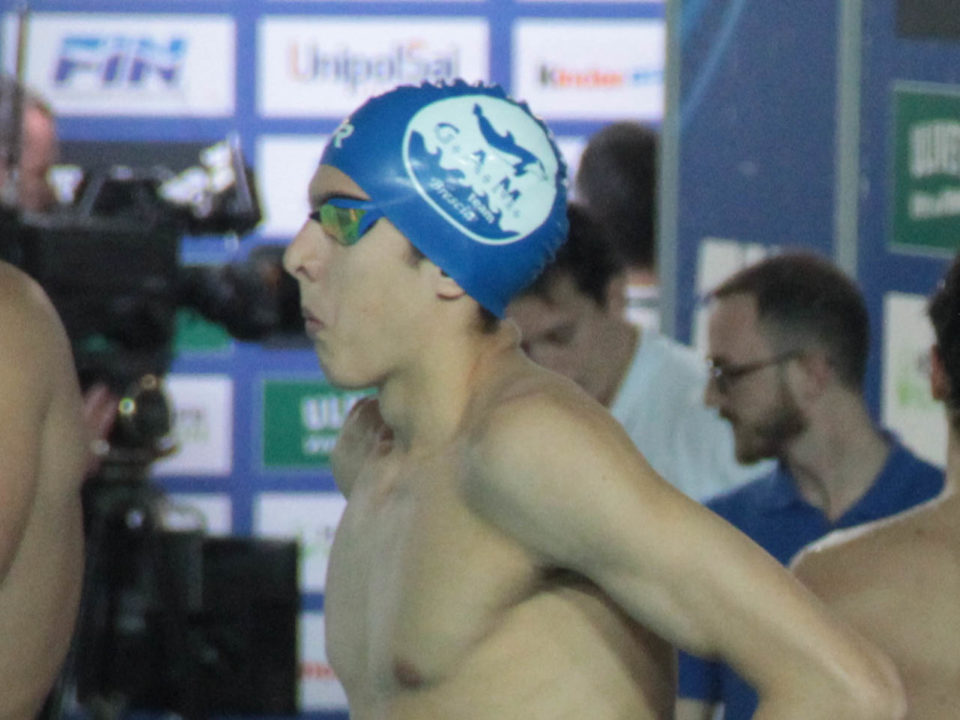 Michele Lamberti of Italy was the star of the session during day 1 prelims at the 2021 European Short Course Swimming Championships. Lamberti swam his way to a top 3 seed in both the 50 backstroke and 100 butterfly, notching a new Italian record of 22.91 in the former.

Lamberti started his meet off in lane 1, heat 3 of the men’s 50 backstroke. In an outside lane against the likes of fellow Italian backstroker Lorenzo Mora in lane 5 and Robert Glinta in lane 4. Despite the competition, Lamberti managed to power his way to the wall and stop the clock first in 22.91 seconds, becoming the first Italian man to ever swim the short course 50 backstroke under 23 seconds.

He had broken the former national record in the event of 23.05, which was held by Simone Sabbioni. Sabbioni set that mark 4 years ago at this meet and used the time to collect a gold medal in the event, beating out world junior record-breaking silver medalist Kliment Kolesnikov.

Kolesnikov returned 2 years later to take the SC Euros title for himself in 2019 and is back in the water in 2021, en route to a repeat title. Kolesnikov was the only swimmer other than Lamberti to swim under 23 seconds in the event, hitting a 22.85 from heat 4 to slightly trail his own Championships record of 22.77.

In addition to earning second seed to Kolesnikov and setting a new Italian record, Lamberti’s swim was a stark improvement upon his former PB, which swimrankings.ca has at a 23.99 from back in 2019. He was entered, however, with the 24.18 he posted earlier this year, meaning that he improved by more than a second and jumped from 20th seed to 2nd.

Most notably, not only did Lamberti beat every in the prelims, but his morning swim of 22.91 is actually faster than ever swimmer other than Kolesnikov’s entry time. Robert Glinta was entered in second place heading into the meet with a 23.01.

As if that swim from Lamberti wasn’t enough, he was back in the water just 2 events later for the men’s 100 butterfly. Just as he had done in the 50 back, Lamberti won his heat (this time from lane 8). Lamberti swam a 50.17 to shave nearly 2 seconds off his entry time of 52.06 and climb from 24th seed to 3rd.

The only two men that were faster than him during prelims were the Russian duo of Aleksandr Shchegolev and Roman Shevlyakov who posted times of 50.05 and 50.13, respectively. That puts Lamberti ahead of both of the top 2 seeds in the event, Kristof Milak and Tomoe Hvas, who swam a 50.39 and 50.33, respectively.

Lamberti wasn’t quite fast enough to clinch a second Italian record, missing the mark of 49.54 that Matteo Rivolta set back in 2017. While he didn’t get the NR, Lamberti did help to eliminate Rivolta from advancing past prelims and he and Alberto Razetti placed 2nd and 14th in the heats with Rivolta placing 16th. Since only 2 men from each country can advance, Rivolta is out.

Lamberti will have his work cut out for him to maintain his top 3 positions in the 50 back and 100 fly as we can expect the competition to get faster as they take to semi-finals and finals, but his first session sets him up nicely for a bid for the podium.

How old is that photo??

Note that he is Giorgio Lamberti’s son, former world record holder in 200 free

I read he had a severe case of covid19. Hope he did recover well.

Yes, he apparently did recover well