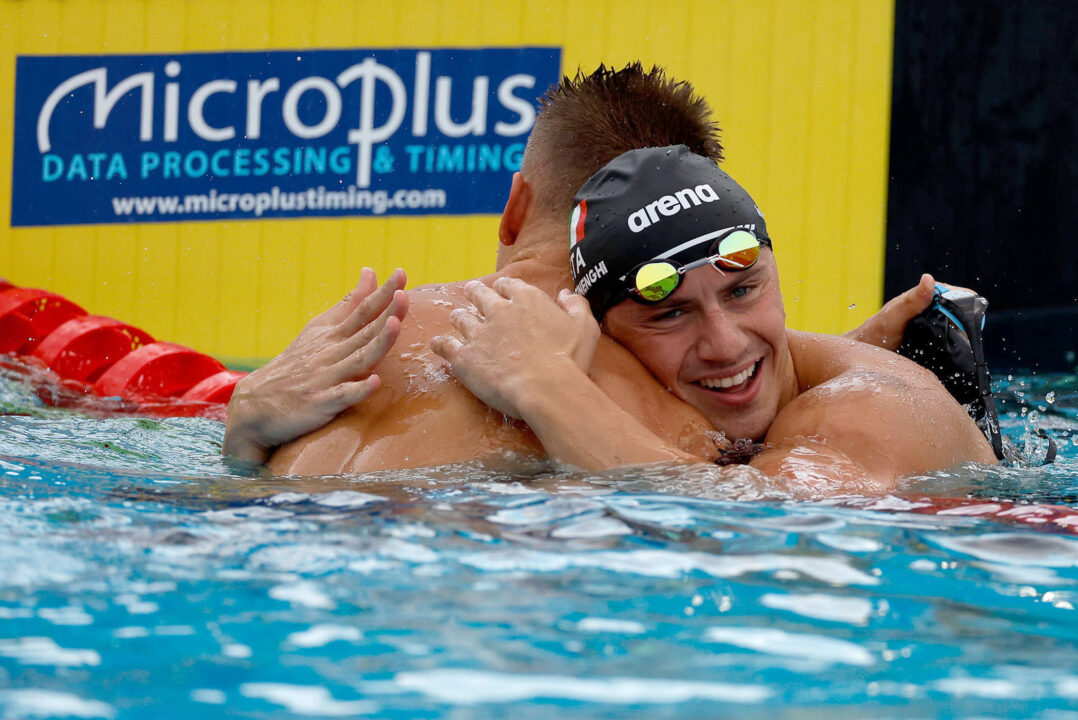 Italy has taken full advantage of swimming on their home turf in Rome, putting up a phenomenal team performance. That continued this morning in day 5 prelims, where Italy took the top 4 spots in prelims of the men’s 50 breast. It was actually the 2nd time Italy has gone 1-2-3-4 in a prelims event at these European Championships, as the Italian women did the same in the 100 breast a few days ago.

This morning, 100 breast champion and Italian Record holder Nicolo Martinenghi led the charge, swimming a 26.71. He won Silver at the World Champs in June with a 26.48. Martinenghi’s lifetime best comes in at 26.38, which also stands as the Italian Record in the event.

Next in was teenager Simone Cerasuolo, who tied his lifetime best in the event with a 26.85. Fabio Scozzoli, who just turned 34 less than two weeks ago, had an incredible performance this morning, taking 3rd overall at 26.89. That swim comes in just 0.19 seconds off his lifetime best in the event, which was set at the 2019 World Championships in Gwangju. Scozzoli’s performance is particularly impressive, as the veteran has been plagued by injuries in recent years. Reports are that he’s expected to have a relatively minor knee surgery in the near future and will evaluate whether he wants to continue on to Paris 2024 after his recovery.

Taking 4th this morning was Federico Poggio, who clocked a new lifetime best of 27.07. That performance took 0.16 seconds off his previous best in the event, which had stood since June of 2021.

Unfortunately, due to the rules at the European Championships, which only allow a maximum of 2 swimmers per country to advance beyond prelims, both Scozzoli and Poggio are ineligible to advance to semifinals tonight.

Italy’s performances this morning were impressive, seeing all 4 men swim times that would have been fast enough to qualify for the final at the World Championships in June. Italy has been trending in a very positive direction over the last few years, but the performance in the men’s 50 breast this morning, as well as the women’s 100 breast prelims earlier in the meet, shows just how much depth they’ve built in recent years, especially in breaststroke.

Speaking on that depth, Italy has performed exceptionally in the breaststroke events so far at these Championships. In the men’s 100 breast a few days ago, Martinenghi won Gold , tying his Italian Record (58.26), while Poggio won Silver in a new lifetime best of 58.98. Italy also went 1-2 in the women’s 100 breast final, seeing Benedetta Pilato win Gold in 1:05.97 and Lisa Angiolini took Silver with a 1:06.34. The men’s 200 breast was Italy’s weakest breaststroke event thus far in the competition, but Luca Pizzini still managed to pick up a Bronze medal with a 2:09.97 last night. The final of the women’s 200 breast will take place tonight, where Italy’s Martina Carraro is the top seed (2:23.73) and Francesca Fangio (2:25.55) will also be racing for a medal.

Article needs correcting I think. Martinenghi took silver at the World’s and did a 26:48 in the final

Pog but also not