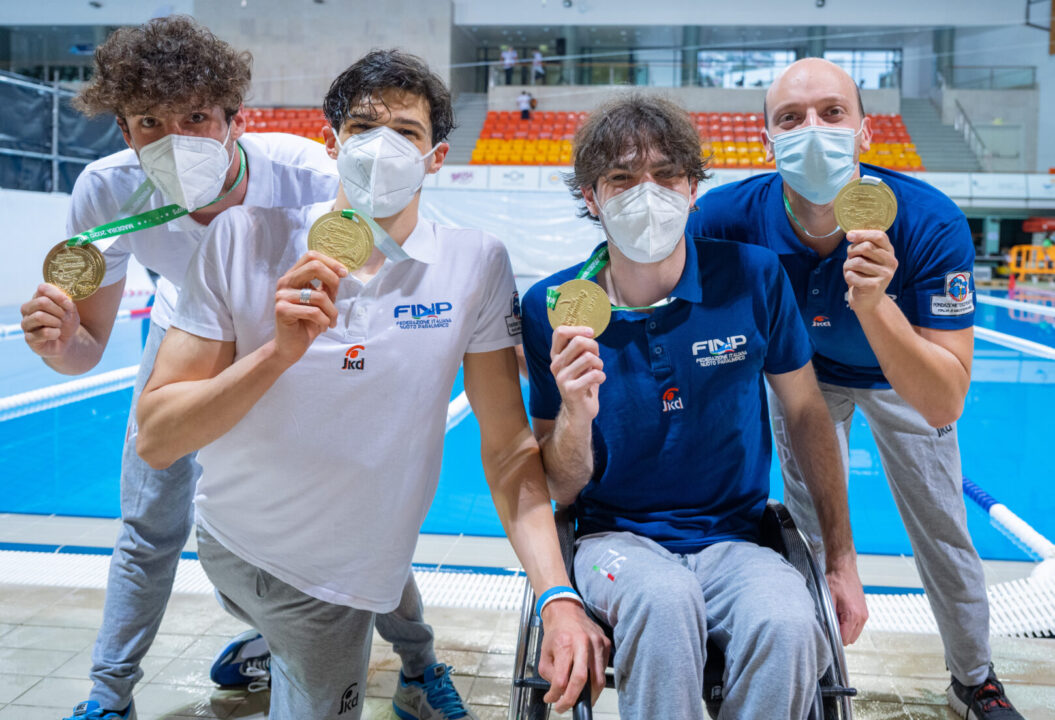 Italy's relay of Fantin, Raimondi, Morlacchi and Barlaam (above) broke the World Record in the 4x100 free relay, putting Italy atop the final medals table. Current photo via the International Paralympic Committee

Going into the final two events of the 2021 World Para Swimming European Championships, the men and women 4×100 free relays, Italy was two gold medals behind where they needed to be to beat Ukraine on the medals table.

Then, the Italian women destroyed the 4×100 free relay, taking 1st place about 6 seconds ahead of the field. (The results do not show who exactly competed on this relay.)

In the end, it all came down to the men’s relay.

Italy’s team of Antonio Fantin (S6/SM6), Stefano Raimondi (S10/SB9/SM10), Federico Morlacchi (S9/SB8/SM9) and Simone Barlaam (s9) broke the World Record with a time 3:46.06. Barlaam anchored the relay to victory and they finished about 6 seconds ahead of Ukraine who snagged 2nd place.

The previous record was a mark the four Italians set at 3:46.83 at the 2019 World Championships.

Barlaam won gold in the men’s 50 free S9 final earlier, contributing to a total of 8 medals that Italy earned tonight. He touched the wall just .06 off his World Record from 2019. Italy had another vital win in the women’s 100 free S7 final where Giulia Terzi went 1:10.48 to crush her own European Record from 2020. Her previous mark was set at 1:11.34.

Two more European Records fell on Saturday, first in the women’s 50 free S9 final where Portugal’s Susana Veiga touched the wall in 1st place with a time of 28.85. This broke Sarai Gascon of Spain’s previous record, 28.89, by .04. Gascon earned 2nd place in the final tonight (29.30).

“To be honest, I can’t express how am I feeling right now. I broke the European record from Sarai Gascon who is such an amazing swimmer, and I also did it here in Madeira,” Veiga told World Para Swimming.

“We are rivals inside of the pool, but we all have the same feelings, and we respect each other. It’s amazing to see the reaction of support from other athletes.”

In the men’s 100 fly S14 final, Brazil’s Gabriel Bandeira broke the Americas record with a time of 54.99. With this swim, Bandeira has won gold and set an Americas Record in every event he competed in this weekend for a total of 6 gold medals and 6 records.