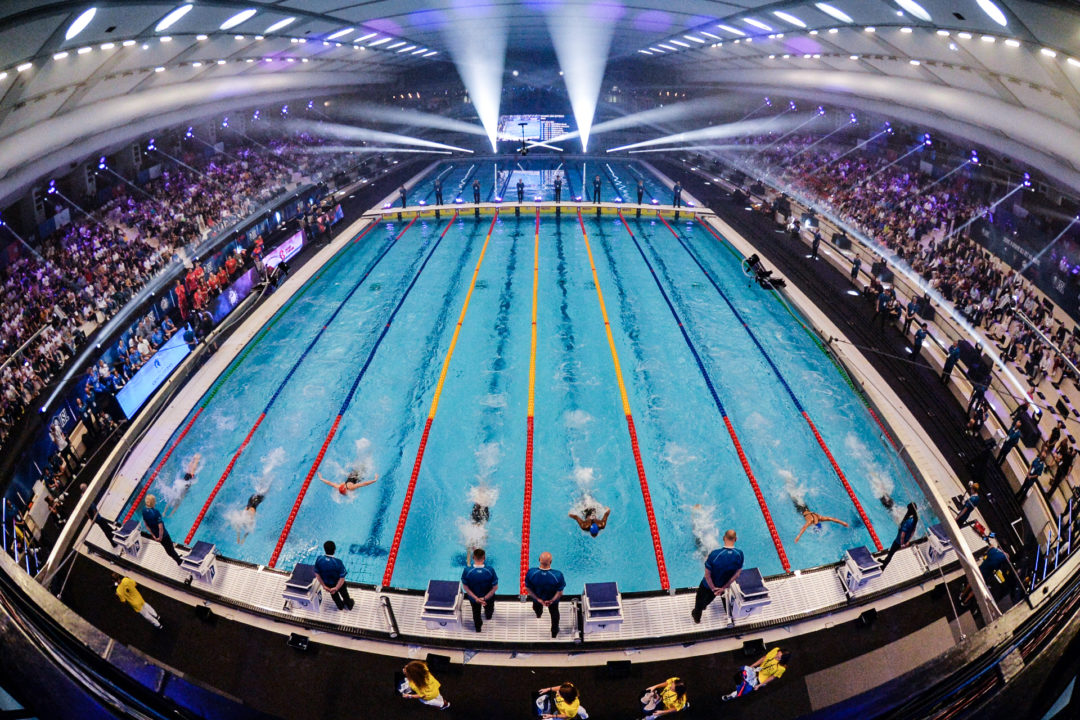 While the ISL's strict bubble from the 2020 season in Budapest won't be repeated in 2021, there will still be daily testing for COVID-19 in place. Archive photo via Gian Mattia D'Alberto

While final details about the 2021 season of the International Swimming League are still trickling out 6 days per week, the league did confirm to SwimSwam the COVID safety protocols on Friday.

According to ISL Technical Director Tolis Tsagkarakis, there will be no “bubble” akin to what we saw in Budapest last season.

Instead, the league will rely on athletes using their best discretion to remain safe during the ongoing COVID-19 pandemic. The veracity of that judgement will be put on examination via daily COVID-19 tests, with athletes who test positive having to be quarantined.

Tsagkarakis says that the support of the Campania Region, in which Naples is located, will help the league maintain a robust COVID-19 testing program.

Whereas last year in Budapest, athletes were, essentially, confined to Margaret Island, where the Danube Arena is isolated from the rest of the city, this year they will be allowed out into the host city of Naples, Italy, to have dinner, socialize, and interact among the general public.

Athletes will be expected to abide by local health and safety protocols, which includes mandatory mask wearing in indoor public places such as bars, restaurants, museums, and public transport, plus outdoors in places where social distancing is not possible.

Masks are not currently required in most outdoor places in Italy.

Spectators are expected to be allowed in for the events, with Italy currently have a maximum of 35% capacity for indoor arenas like the Piscina Scandone, where the ISL regular season will be hosted. Proof of a COVID-19 vaccine using the COVID-19 digital green certificate passport program will be required for spectators.

That certificate indicates that they have had a vaccine, obtained a negative test result, or have already recovered from COVID-19.

There will still be some rules about social distancing in common areas of the ISL venues like hotels and the pool, including social distancing while at team meals and athletes being housed one-to-a-room, but the sense is that these rules will generally be more lax than last season and be enforced primarily to the degree of the rules of local health officials.

Vaccines are not being required for participation in the league.

Current Italian rules for entering Italy vary based on the country from which the individual is coming from. For individuals from EU countries, the Schengen area, from Israel, Andorra, or Monaco, the presentation of an EU Digital Green COVID Certificate, or a vaccine passport, exempts them from quarantine.

The same standards (vaccine, negative test, or recovery from infection) exempts athletes from the United States, Canada, and Japan from quarantine as well – though they can present other forms of proof besides the EU Digital Green COVID Certificate.

At present, the country is not allowing individuals who have been in Brazil, India, Bangladesh, and Sri Lanka.

While the ISL says that they are working to help athletes become exempt from those quarantines where applicable, they stopped short of guaranteeing that athletes from those countries would not have to quarantine.

Teams will generally arrive 3 days prior to the start of their first match. For the teams participating in the first meets of the season, which is Energy Standard, Toronto, DC Trident, and Aqua Centurions, will begin arriving in Italy on Monday. Teams from the next meet, Cali Condors, LA Current, Tokyo Frog Kings, and New York Breakers, will arrive later next week.

Two teams, London Roar and IRON, don’t compete until the 2nd week of competition, and they are expected to arrive early that week.

The 2021 regular season schedule will be similar to 2020, with each team swimming 5 regular season matches. There is a slight change thereafter, where the 6th through 10th place teams at that point will have a “play in” match, with the top two teams advancing to the playoffs.

From there, the season will proceed as before, though the action will shift to Eindhoven, Netherlands for that playoff round.

Italy was the world’s first major hotspot for COVID-19, outside of China. While like much of the world, Italy is currently experiencing an increase of cases from the Delta variant of COVID-19, case numbers have stabilized over the last week at around 6,200 cases, which is about 10 cases per 100,000 residents.

Accoridng to Bloomberg data, Italy has given out almost 75 million doses of COVID-19 vaccine, which is enough to vaccinate about 62.1% of its population. That is the ninth-highest rate of vaccinations within the EU behind only Malta, Denmark, Belgium, Spain, Portugal, Ireland, Netherlands, and France, out of 27 EU member nations.

Without accounting for population, only Germany and France have given out more vaccines in the EU than has Italy.

Travellers from Australia need 10 days isolation. Okay. Some states of Australia have no covid at all. And those who wanted vaccination have pretty much been vaccinated. Where are all the critics of Australia’s 14 day quarantine because there were plenty of them?

I think some of these programs involve reciprocity. So, because Australia is requiring big quarantines for Italians, Italy is going to reciprocate.

Going 14 days isolation in Australia and then 10 in Italy is just insane , I don’t think the aussies will handle this, just a few weeks after the OG

That is why Zac said in his interview that If he does a round, he won’t go back to Australia cause he doesn’t want to quarantine both ways! Don’t blame him
EU is in better shape Covid wise than US It looks like there might be some wine, beer, sangria might be consumed with their pizza!!!!

Then they should’ve done their homework/asked the relevant questions re any quarantine requirements before confirming any such participation in this year’s series. Perhaps that’s why some of their team mates chose to go straight to ITA post Olympics. Its not rocket science, just part and parcel of being a professional sportsperson and these regulations are a reality of life with the world being as it is.

It wouldn’t surprise if some decide to “duck out” now however, they really should have made it know well before now.

I think they knew already and I don’t think many Australians will be going at all unless they are already there. I just don’t understand why Italy is harsher on Australians than some other countries where covid is rampant.

Does it mean Brazilian swimmers are unable to participate in the regular season?

It’s hard to get a straight answer on this. If I read between the lines, it *sounds* like there’s maybe a workaround because of the extreme testing protocols. Maybe they’ll be limited to hotel and pool for the first week or something, I don’t know. But the league made it *sound* like they thought they could work around those quaratines. Which, to me, seems probably in line with other sports leagues.