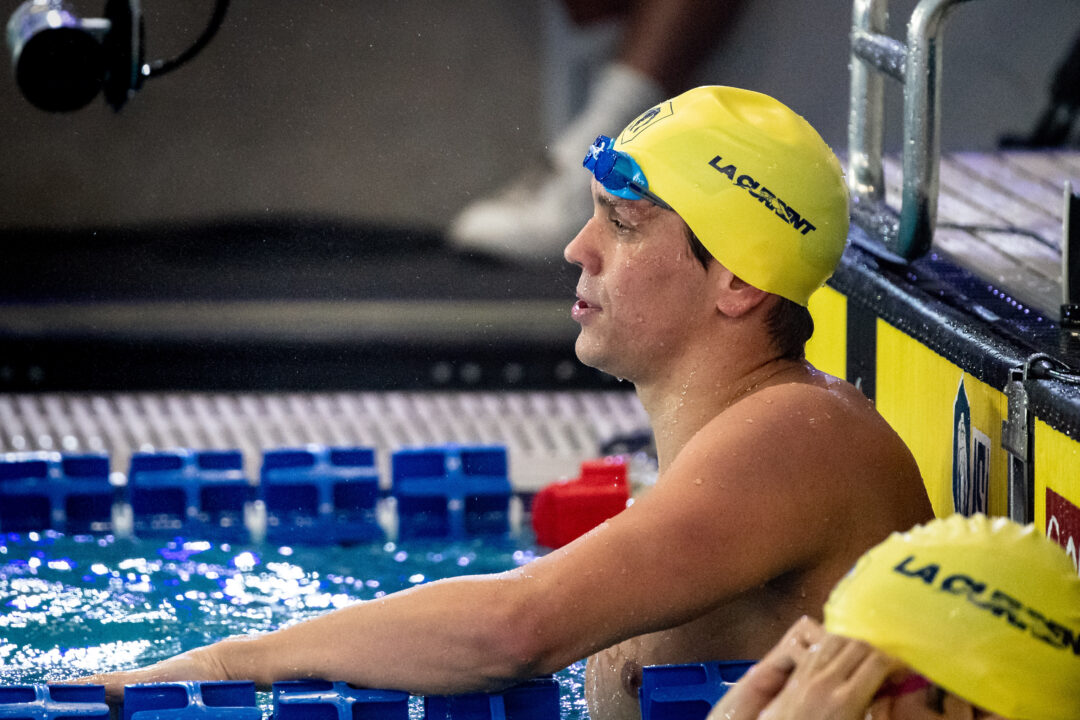 Katinka Hosszu, Tom Shields (above), and Michael Andrew lost their bid to seek class status for damages in their lawsuit against FINA. Archive photo via Giorgio Scala / Deepbluemedia / Insidefoto

Both plaintiffs and defendants in the ongoing legal dispute between the International Swimming League and FINA have scored victories in court this week in the battle toward establishing a class certification, which would dramatically increase the stakes of the case, because plaintiffs would essentially be suing on behalf of a much larger number of athltes.

The case revolves around whether or not FINA behaved in violation of anti-trust law with regard to athlete participation in a 2018 Energy for Swim meet that was a precursor event to the International Swimming League.

It claims violations of the Sherman Antitrust Act of 1890, which forbids organizations from engaging in anti-competitive behavior. Attorneys for the plaintiffs also claim tortious interference with contractual relations or prospective economic relations, for collusion to unreasonably restrict competition, and for monopoly.

While the International Swimming League is not a party to the case, it is using the three named plaintiffs, Tom Shields, Katinka Hosszu, and Michael Andrew, as a surrogate in court. ISL has also filed a related case, and as such is named as an interested party in court filings.

The side of the athletes and the pro league won a significant financial victory when US Magistrate Judge Jacqueline Scott Corley admonished FINA for a filing made to the court. The filing, which was in response to what FINA characterized as a “change in the Plaintiffs’ expert’s damages theory,” included revelation of confidential information from settlement negotiations between the two sides.

FINA said that they felt it was okay to disclose that information because the communications occurred between the parties and after settlement conference proceedings had ended, which the judge rejected.

FINA further argued that “confidentiality rules should not be used to conceal unethical conduct,” which the judge also rejected.

FINA’s goal with the filing was to argue that the Plaintiffs are not adequate class representations, according to the order to strike submitted by the judge.

The judge wrote a scathing conclusion that accused FINA of that called it the most “egregious” violation of a rule regarding disclosure of settlement conversation that it has seen in at least a decade.

This Court has conducted more than 1000 settlement conferences over the past 10 years. During that time it has never witnessed a violation of ADR Local Rule 7-4 as egregious as FINA’s here. Not only did that violation damage Plaintiffs by requiring them to file a motion to strike and reply, it led to the loss of a settlement magistrate judge who had been working with the parties for over 22 months. FINA’s insistence that it can unilaterally decide what settlement communications can be disclosed has thus wasted precious public resources in addition to the settlement judge’s heroic efforts at facilitating settlement. Further, FINA’s conduct has damaged the entire ADR program of the Northern District of California and thus the administration of justice. The success of settlement negotiations “depends largely on the willingness of the parties to freely disclose their intentions, desires, and the strengths and weaknesses of their case; and upon the ability of the [third party] to maintain a neutral position while carefully preserving the confidences that have been revealed.” In re County of Los Angeles, 223 F.3d 990, 993 (9th Cir. 2000) (citation omitted). Sadly, as a result of FINA’s breach, parties will have reason to question whether the promise of confidentiality will actually be honored.

Paperwork submitted by the athletes’ lawyers included costs of $136,799.

The court ruled that the Plaintiffs had not adequately provided support for acting as a class when seeking damages from FINA. They did, however, find that in seeking injunctive relief, they had met that adequacy, because in the case of injunction, the interest of all athletes moved together.

In that case, the courts agreed with the logic of the argument by the NCAA against certification of a class, but ultimately said that the specifics of the Plaintiffs’ damages claim supported a class.

Whereas in the NCAAs case, there was “unfettered discretion” to limit money (in other words, prevent athletes from seeking compensation from outside parties and brands), in this case, it was a zero-sum: that some athletes gain and others lose, according to the Plaintiffs’ argument.

That means that all athletes do not stand to gain in the same direction as they did in the NCAA’s case, so the court rejected that as a supporting ruling for class action.

The court also pointed to the ownership by Andrew and Hosszu of league teams, plus funding of the plaintiffs’ case by Konstantin Grigorishin, the founder of the ISL, creates a “risk of divided loyalties,” which also undercuts their request for class status.

The court did say, though, that these things were not a concern with regards to the injunctive relief sought, which allows Plaintiffs to file as a class to stop FINA from interfering with athletes participating in ISL via threats of suspension.

In this case, the courts have decided that the injunctive class is uniform enough to be granted, but the damages class, which seeks financial compensation from FINA, is not.

This does not rule on the merits of the claims by the Plaintiffs against FINA, it just limits their ability to act as a class that represents a much broader set of athletes. That will serve as a huge blow to the Plaintiffs and the ISL, because class status would have resulted in a substantially higher calculated damage if they won their case against FINA.

Among the more interesting revelations in the judge’s orders are the first public disclosure of ownership stakes in the league’s teams.

Through discussion of whether team ownership is a common characteristic among all class members, it is also revealed that two swimmers other than Andrew and Hosszu also have an ownership interest in an ISL team.

The court said that this gave those owners a $5,000 incentive to support a settlement with the class, even if it is not fair to all members of the class.

The documents also reveal that two other athletes have ownership stakes in teams, though the fillings that reveal those identities have been sealed by the court.

The ownership structure of the league is still not entirely clear, but as of last year, Grigroshin remained a majority owner in most of the league’s teams. Two recent as general managers have resigned include that Rob Woodhouse, former GM of the London Roar, is a “minority owner” of the team, while former DC Trident GM Kaitlin Sandeno says that she has no ownership stake in the team.

Well MA and family must be really raking in the cash from the ownership stake in … oh wait.. the New York Breakers. No wonder Tina thinks she can just blast nonsense on the NYB Twitter account.

“Tina is no longer the general manager of”
but she still tweets for them, right?

Dressel said it clearly in his last video with Swimswam „Worlds over ISL“.

As much as swimmers try to overhype ISL, this Konstantin kid needs to realize that elite swimmers are focusing on Worlds and Olympics. Just look at how unprepared most of them came last year to the regular season and how many of them skipped a plenty of meets.

Moreover, he lost 60 millions in the first 3 seasons without any major revenue. All in all, competing against FINA won’t bring you any advantage.

This ‘Konstantin kid’ is ridiculous condescension.

I agree. At the time of the ISL’s inception, if ran correctly, it seemed like it might be able to fill a valid need in swimming: more opportunities for elite athletes to race, and more opportunities to race for money. But, as you said, at the end of the day there are only two meets swimmers are willing to revolve their life and career around, OGs and WCs, and the ISL experiment showed this in full. Swimmers still need more opportunities and options to get paid and receive funding, but it’s obvious something like this isn’t quite the answer.

I fully expect that if there is a season this year for ISL, then it will be the last. Sure,… Read more »

It has brought swimmers some advantage.