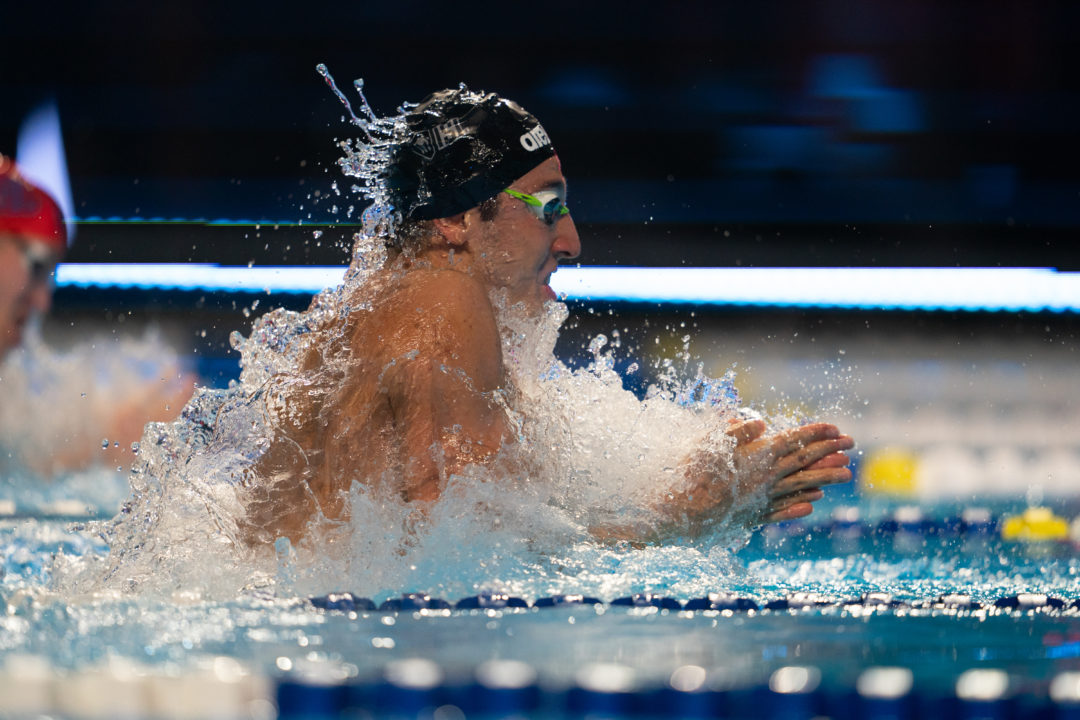 Iron moves up our rankings... but a controversial skins choice by Energy Standard might have had a major hand in that move. We explore further. Archive photo via Mine Kasapoglu

It’s a week of very minimal changes in our Power Rankings, as the teams have become pretty clearly stratified after four weeks of competition.

But with few changes to talk about, we’ll structure our power ranks a little different, pulling out one key statistic for each team, and one big question mark we still have.

Key stat: The Condors have the league’s best time this year in 8 of 18 women’s events this season. But they were also passed up in the medley relay by Energy Standard, whom they won’t see head-to-head until the postseason.

Question mark: How quickly can Nic Fink get up to speed? He made his 2020 debut this week, but was definitely still held back by injury. If Fink can even get close to the 25.7 and 56.7 breaststroke times he hit in last year’s finale, it’ll go a long ways toward lifting the Condor relays.

Key stat: Energy Standard has the #1-ranked women’s medley relay and men’s medley relay heading into the final week. It’s possible the defending champs could have a strangle-hold on all skins decisions from here on out, though the Cali women and LA men have plenty of firepower, too.

Question mark: How will Energy Standard handle Sarah Sjostrom‘s workload going forward? After swimming 9 events in the season opener, Sjostrom missed a week with back pain, then swam just three events in week 4. The rise of Anastasiya Shkurdai and Maddy Banic has allowed Energy to cover for Sjostrom in the butterfly races. But Sjostrom looked awfully good winning the skins. One key to repeating as league champs will be swimming Sjostrom enough to maximize her league-winning potential without over-extending her and potentially losing the reigning league MVP to injury again.

Key stat: London has gotten to pick the stroke of the skins a league-leading four times, twice for men and twice for women. They don’t lead the league in either medley, but have been good at winning that race when they need to.

Question mark: Weirdly enough, the question mark comes at a spot where London once looked very strong. Just how much can the Roar rely on their men’s backstrokers in the postseason? Guilherme Guido and Christian Diener swept the 50 back skins early in the year. But they were way off their best times this week. Meanwhile, the top teams in the league are pretty much all loaded in men’s backstroke, making that a deep event discipline in the postseason. If London gets to keep picking the skins, can they trust Guido/Diener against fields that could include any of Ryan Murphy, Kliment Kolesnikov, Evgeny Rylov, Matt Grevers, Shane Ryan, Coleman Stewart, or Justin Ress? A week ago, that was an easy yes. After this week, things are a lot cloudier.

Question mark: Will the breaststroke skins sink this team in the postseason? It’s looking likely that any match with Cali has good odds of featuring a women’s breaststroke skins race. That’s also LA’s weakest women’s skins field by a lot. LA either needs a breaststroker to step up, for their medley relay to pull a big upset, or to get lucky with groupings to avoid that tough skins draw.

Key stat: Relays have stung the Frog Kings. They have just one of the five relays ranked in the top half of the league for the season – the men’s medley sits 5th. Tokyo currently sits 9th of 10 teams in the men’s free relay and dead last in the mixed free relay.

Question mark: What’s up with Vladimir Morozov? Last year, he was a force, with season-bests of 20.7/46.1 in free, 25.8 in breast, and split 45 multiple times on free relays. This year, he’s only been 20.9/47.8 and hasn’t had much of a skins impact. Morozov missed a lot of pool training amid the pandemic, and it’s showing. Without Morozov swimming his best, this team will probably find itself on the outside of the league final.

Key stat: The work Emre Sakci has done in the 50 breast skins has been unbelievable. Take a look at his times by round in two 50 breast skins, compared to every other late-round skins qualifier:

Sakci not only has the most speed of anyone in this league, he’s also holding his speed together significantly better than anyone else in the league. He’s currently 7th in the league in individual scoring, and has been a monstrous addition for Iron.

Question mark: Will we ever get to see Iron’s incredible 50 fly skins lineup? The only skins race we haven’t seen yet is women’s butterfly. When you look deeper, it’s not that surprising that we haven’t. Iron has the top two 50 flyers in the league in Ranomi Kromowidjojo (24.59) and Melanie Henique (24.71). They’ve gone 1-2 in every single meet so far, and really haven’t been challenged. But Iron is also pretty weak in the women’s medley, ranking 9th of 10 teams. That means Iron never gets to pick the skins. And no one else will pick fly because of how intimidating Iron is.

Key stat: The Toronto women rank 4th in the league in per-meet scoring, but the men rank 9th of 10 teams. More tellingly, the Toronto Titans have just four men ranked in the top 5 in the ISL in any event this year.

Question mark: Did Energy Standard actually lose the week for Toronto? We had the Titans pretty close with Iron in last week’s ranks, and Toronto actually led Iron after day 1. Heading into the skin races, Iron led Toronto by 10. But Energy Standard had the meet well in hand, and made the puzzling call to swim the men’s skins in breaststroke, rather than backstroke, where Energy seems to be strongest. Iron has the best male breaststroker in the league (Sakci) but no top backstroker, while Toronto is probably better in backstroke than they are in breaststroke.

Energy’s decision to pick women’s freestyle at least tracks with their roster strengths. But it also played to Iron’s strength and hit one of Toronto’s weakest points. The outcome was that Iron outscored Toronto by 47 points in the skins to win by 57. If Energy had made a more conventional choice to swim the men’s backstroke skins, things very well could have turned out differently for Toronto.

Key stat: While there have been some bright spots for New York, the Breakers will end the regular-season ranked dead last in the league in both men’s relays. They’re also currently 9th in the mixed free relay, and could sink to 10th if Tokyo can cut half a second in the final week.

Question mark: How can the Breakers find more relay value for Michael Andrew? Maybe Andrew’s greatest strength is his sprint versatility. But he’s been pretty much a relay non-factor so far, swimming just three medley relay legs. New York has tried to use Andrew to shore up weaknesses, swimming back and fly on those medleys, rather than breaststroke or freestyle where he’s had his best individual swims. If the Breakers can shore up some of those roster weaknesses next year, they’d greatly benefit from being able to use Andrew’s versatility as a difference-maker in his best strokes, rather than as a reliable band-aid in the team’s weakest ones.

Key stat: Trident sprinter Zach Apple will conclude his season leading the league with two 100 freestyles in the 45s and three relay splits in the 45s. The only threat to Apple’s league-leading time is Caeleb Dressel, who sits a tenth back. Other than Apple and Dressel, just five men (Marcelo Chierighini, Alessandro Miressi, Kliment Kolesnikov, Blake Pieroni, and Kristian Gkolomeev) have split 45 in a 100 free this year. Apple has done it three times.

Question mark: What could the Trident have done with one more free relay leg to work with? DC ranks 7th in the league in the men’s free relay, but they’ve always seemed to be one or two swimmers away from completing a relay and fully maximizing Apple’s brilliance. Jacob Pebley was a pretty reliable 46-second split, and Ian Finnerty did split 47.0 once. If DC had had one more 46-second leg, they might have been one of the league’s best relays.

Key stat: The Aqua Centurions are unbeaten this year in the men’s free relay. Alessandro Miressi has split 45 three separate times this year, and he and Szebaztian Szabo have combined for an incredible ten relay splits under 46.5 so far this year.

Question mark: How much will the addition of Federica Pellegrini change how this team looks? In this format, Pellegrini isn’t a complete game-changer. But when she join what is by far the league’s lowest-scoring women’s roster, we should get at least some partial glimpse at what this roster could have been had they not lost a dozen swimmers from their original roster prior to the season.

The ISL rankings are pretty cut and dry, but has swimswam considered doing a rankings show on the podcast. Would love to listen into the discussion on NCAA rankings. Could even bring in guests like David Marsh for NCAA or Braden Holloway / Eddie for isl

Actually really like this idea- i’d listen to that

Energy played to make Toronto lose.. possible…
And did a coach actually say they had it rough??? Easiest schedule out of all teams FOR SURE!!

The skin choice of ENS did not make much difference after all. It is a bit unnerving, however, if similar thing happen when 2nd and 3rd place are life-or-death, getting into the final or not. A naive question: what is the rule (or is there a rule) for grouping the 8 teams for the two semifinal matches?

I think we don’t know yet. Maybe they’ll wait for the final standings and see which teams are better for Energy to face in the semis before they decide.

I’m only half joking when I say Energy Standard will be grouped with the teams seeded 6th, 7th and 8th.

We’ve asked and were promised the answer after the end of Match #8, but that answer has not yet come.