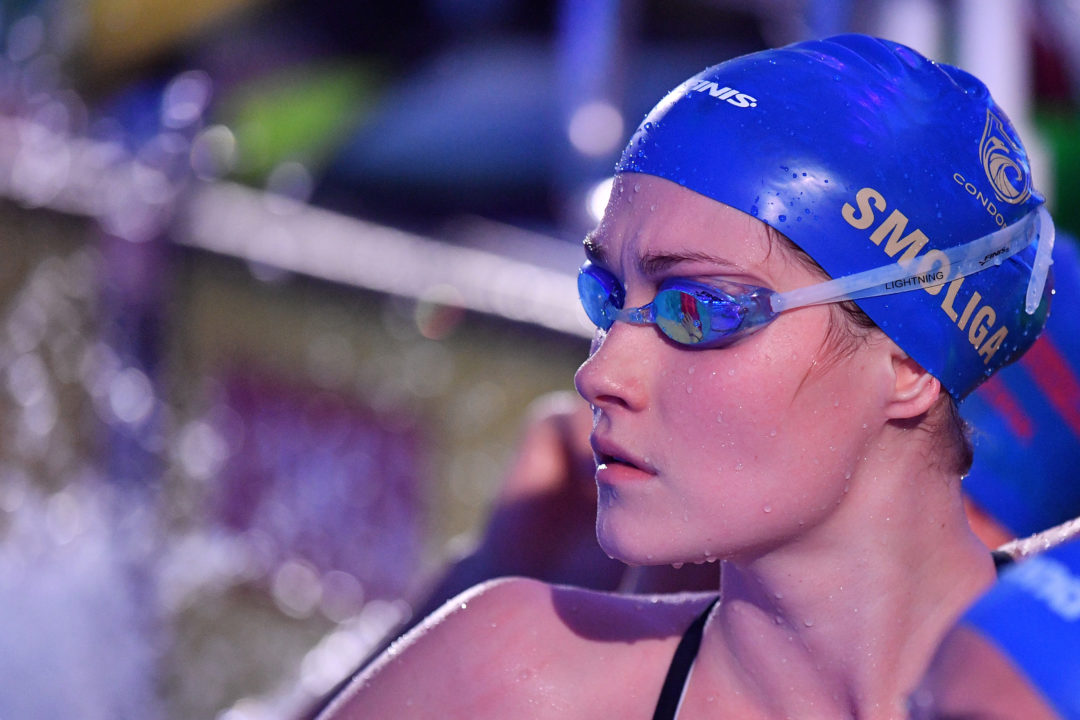 One week in and we've already got a shift in our #1-ranked team in the International Swimming League, based on high-impact jackpot rules. Archive photo via Alfredo Falcone/LaPresse

The opening week of the 2020 ISL seasons has already shifted our #1 ranking after an upset of the defending champs.

Jackpot scoring was the friend of the Condors, even if it stung some of their weak points on the men’s side. When you have Lilly King and Caeleb Dressel, any rule tweak that increases the value of your top-end stars is a net gain. When will Nic Fink be back to save the men’s breaststrokes?

Energy Standard didn’t swim particularly well in the season opener, and it wasn’t close. Still, Energy has a clear path to a repeat title: they get a much-needed bye week next week with the hope that Femke Heemskerk returns from COVID quarantine after that. And the rest of the year? ENS has zero matches against Cali, zero against London, zero against LA, and just one matchup with Tokyo. Instead, Energy gets to face the bottom four in our rankings in pretty much every remaining match.

The Current made things closer than expected with Energy Standard in the season opener, and swept the men’s relays. Their backstroke dominance should only get stronger if Zane Waddell can make his ISL debut alongside star Ryan Murphy. And Tom Shields just continues to be the most under-appreciated swimmer in the entire ISL. Murphy and Shields lead the #2-scoring men’s roster in the entire league so far this year.

We haven’t seen Tokyo compete yet, but the more we see of the new format in action, the more valuable a swimmer like Vladimir Morozov looks. Next week, Tokyo gets to debut against the #3-ranked LA Current in a battle that could shake up the top of our rankings considerably.

London absolutely dominated their match, but their incredible scoring ranks (the #1-scoring men’s roster and #2-scoring women’s roster this season) are a little inflated by swimming against much weaker competition than the top teams in our power rankings. One matchup we just can’t wait for: London vs LA in the men’s backstrokes. That’ll really put Christian Diener and Guilherme Guido to the test after they obliterated DC, Aqua, and Iron.

The backstroke skins were about the worst-case scenario for Iron, and they still managed to get a woman and a man into the second rounds. Match MVP Ranomi Kromowidjojo is a game-changer in almost any skin stroke, but we’d only expect her production to go up if she gets to compete in free or fly down the road. Iron actually has a pretty soft upcoming schedule – outside of Cali, their grouping next week includes two of the bottom three teams in the league, and then Iron gets a bye.

Like Tokyo, we haven’t seen the Titans debut yet. It feels like Toronto might have sneaky relay depth like the Current – but their lineup is also going to take some creativity. We have Louise Hansson as a top-two swimmer in five individual events on the team’s depth chart, and picking her best lineup without overextending her endurance is going to be a major hurdle.

The Breakers got the worst possible grouping last week, swimming against the three best teams in our power ranks. Things get a lot easier this week with #6 Iron and #9 DC in the mix. But the Breakers are also at the bottom of the league standings and have to get something going to avoid the risk of being cut before the semifinals. Marco Koch has been a bright spot so far, coming up with one of the league’s biggest jackpots in the 200 breast in match #1.

It feels wrong bumping DC down after week 1 – after all, they had Zach Apple put up arguably the breakout performance of the week, and Linnea Mack was extremely impressive in sprint back and fly. But even in spite of Apple’s brilliance, DC had the lowest-scoring men’s roster of any team in week 1. The schedule isn’t favorable either, as they’ll face a brutal slate of #1 Cali this week, #3 LA/#4 Tokyo/#5 London together in week 3 and then #2 Energy in week 4 with no matches remaining against the bottom-ranked team.

The Aqua Centurion men were shockingly good: they were the #3-scoring men’s roster in the entire league this week. But they sorely missed captain Federica Pellegrini (out with a COVID positive) and top backstroker Simone Sabbioni, who withdrew from the league. Szebaztian Szabo was a major bright spot, and arguably the highest-impact free agent of the league so far. Aqua also got the worst draw possible with the men’s skin race going to backstroke, so they should get a bump if any other stroke gets mixed in next week.

How is it possible…..rhetorical question, since we all know why, that energy standard is facing all the weak teams 0x!!!! London over the whole schedule and will be able to steal points and money from the weak teams, so that their superstars aka Sarah sjoestrom and co. Earn even more money by swimming 25 events and taking money and points from good swimmers who simply don’t have as much talent. Destroys the whole point of the league and shows that Constantine doesn’t really care about the average swimmer or needs to give his stars more money so that they support this…….

Don’t forget, ISL is paying the swimmers a base salary. Even the “lower level” swimmers are making money on this deal.

Yes they are…. but they are making 15k for staying in a bubble for 6 weeks and nothing extra while sjoestrom for example is making base salary+bonus for being a ambassador~40k+price money+MVP money++++ the money stolen by points from other swimmers… how is that fair? They should make more since they are the best swimmers but the whole point is to close the gap and not widen it

Given the options right now, I think 15K + staying at a great hotel + getting fed + having a place to train for the next 6 weeks sounds pretty good.

Much better than what they would get from fitter and faster clinics for sure.

7
-1
Reply
JP input is too short
Reply to  Olympian

I mean… it kinda already has grown past that.

5
0
Reply
Olympian
Reply to  JP input is too short

Athletes association? Merch sales % to the swimmers, any of them starring big brand commercials??

Let’s be honest, the only people who think the ISL is a big deal we’re already fans of the sport.

I’m not trying to hate on the league but It has not JP… Adding another, fancier Swimming World Cup with random teams is not it.

The same scenario apply to most sports where there is a huge disparity in earning between top stars and and average athlete. Unfortunately big starts/names are what draws public and I do not think this will change anytime soon. Life is not always fair, that’s why some are pushing for socialism here in USA to spread wealth around 🙂

Thank you for this analysis Jared, quite good.

-The Frog Kings are looking like a very strong team. It depends on how close Morozov is to his best. We saw many of their swimmers compete at the Japanese SC championships and do a fantastic job, and if they can continue swimming that fast the roster will be really dangerous.
-The Titans look like a solid team, but I have absolutely no idea if they are closer to the top of the league or the bottom. Factors that could immediately up their rankings: if the new swimmers can swim well in-season, if a breakout star emerges, and/or if they have smart strategy.
-The top teams all have absent swimmers that could give the team a boost: Fink… Read more »

Also CAC will most likely have a sharper Caeleb Dressel than he was on Day 1 Match 1 (D01M01 in TV show labeling terminology).

I would’ve thought evey team would swim against each other before the semis. How’d ENS avoid LON??

I don’t get it . A 12 year old could do a draw where everyone plays everyone else.