An Analysis of Reaction Times 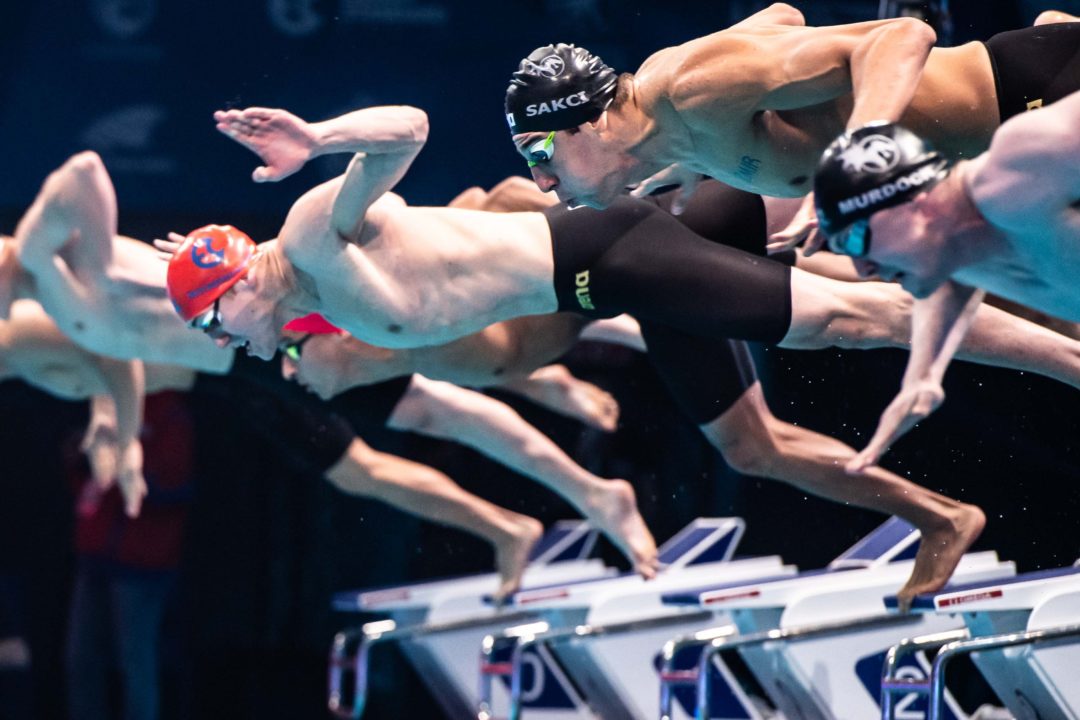 With so much talk of reaction times in recent ISL broadcasts, here's a closer look at the impact they really have on individual performance. Current photo via Mike Lewis/Ola Vista Photography

This article was originally published in the 2019 Spring Issue of SwimSwam Magazine. With so much discussion on reaction times throughout the broadcast of International Swimming League (ISL) matches this season, we thought it’d be valuable to offer our readers a statistical look at the true impact reaction times have on a race.

Every swimming race starts the same way: with the sound of a horn.

Swimmers hear that and begin the race. However, they don’t all leave at the same time. Some react quicker than others. Some get off the blocks faster. We have a stat for this: reaction time.

At high-level meets, there is a pad on the block that measures how long it takes for a swimmer’s feet to leave it.

That reaction-time number isn’t just a measure of how quickly swimmers register the horn and begin moving, but of their start mechanics. A swimmer who does an old-school two-foot start will take longer to get off the blocks than one who does a modern track start.

So let’s dig into some data and see what we can learn about starts. I grabbed times data from every World Championships meet, long course and short course, since 2011.

In events off the blocks (no backstroke starts), swimmers had a median reaction time of 0.7 seconds, with a standard deviation of 0.063 seconds (19,215 data points).

There are a lot of swimmers at Worlds that FINA lets swim despite their lack of a qualifying time — they’re called “universality selections.” They’re from smaller countries, and the goal is to encourage growth of the sport in those places. It’s a nice program, but the presence of those swimmers skews the data a bit, with their slower starts pulling down the averages. Removing all prelims swims from the data removes their reaction times, lowering the overall medians by a hundredth or two of a second at every distance. Table 1 has all the details.

Table 1: Reaction times by distance at World Championships since 2011

Swimmers in shorter events were better off the blocks than swimmers in longer events. This makes quite a bit of sense: The shorter the race, the more the tiny improvements to start mechanics matter to a swimmer’s final time. Also, sprint-oriented athletes tend to be able to generate more power than distance athletes, allowing them to get off the block quicker.

Elite swimmers are pretty consistent with their starts. The average change in a swimmer’s reaction time from one round to the next (prelims versus semifinals, semifinals versus finals, same swimmer, same event) was only 0.02 seconds (standard deviation 0.02).

How long it takes a swimmer to leave the block after the starting horn isn’t the only reaction time reported on most meet results — there are also relay reaction times.

In the case of relays, we can go deeper. Because the relays also exist as individual events, there’s something to compare with. To do that, I took swimmers in the individual 100 free and compared their times with non-lead-off relay splits at the same meet. I used the best individual time and relay split that a swimmer put up at a meet.

Swimmers who swam the individual 100 had faster reaction times on 400 relays than swimmers who did not. Men had an average 400 relay non-lead-off reaction time of 0.24 seconds, and women averaged 0.30 seconds. Each group was about a tenth of a second better than the overall average.

Women saw a smaller relay bump: They improved their times by an average of 0.44 seconds, but of that, 0.41 was from improved reaction times, meaning they improved by only 0.03 seconds from the extra start momentum and relay intangibles.

This is an odd result. Why would women benefit much less from a relay start than men? To see if it’s repeatable or the result of some other unknown confounding factor, I gathered more data, from the NCAA Championships over the past four years.

Men’s relay times were 0.44 seconds faster than their individual swims, and 0.28 of that came from reaction time.

Unlike in the Worlds data, NCAA men and women got very similar benefits from relay starts. I’m not sure what the cause of the differences in the data is. I assume the reaction-time gap between the relay starts and flat starts couldn’t be caused by an equipment difference, because the reaction times in the individual events were almost identical.

The bottom line seems to be that the extra momentum from the arm swing and step on a relay start is worth about 0.15 to 0.17 seconds, but the biggest reason by far that relay splits are better than individual swims is the improved reaction time off the blocks.

I am very surprised by the slow average relay exchange results in the international and NCAA D1 stats. In almost 15 years of relay exchange data on my college team our men averaged low 2 and women low 3 in championship relays.

What you are talking about is not reaction time, but the time on the block – only small part of it composed by reaction time.

Yeah, but the time off the block is the best proxy we have for “reaction time” in swimming

Just gave me the idea that for the world records of the fastest individual swim events and short relays we should probably start to keep track of the reaction times! We are starting to get to the point where it is so important and that a reaction time now makes a big enough difference.

The nerd in me enjoys this and also knows how much time this data took to collect!

Well done. A very polite, scholarly nudge to our most prominent announcer to focus on something else for the first lap of these short course races. (BTW, I think Rowdy takes more grief than he deserves — all of us would make occasional mistakes if it were our job to fill up dead air — but he does pay way too much attention to what is only an extremely minor component differentiating the swimmers.)

Rowdy has improved slightly the last few weeks. But he deserves criticism . Doesn’t do his homework. You should see Kurt Hanson’s instagram ( he’s announcing for the teams over there). You can see how much data analysis and homework he does.

I wonder why the felt the need to inflict Rowdy on us when they had Hanson available? I guess they were trying to pander to the American market?

I, for one, would love it if we could something like a 10m or 15m split. That’s a much better proxy for start performance than reaction time.

Would be especially cool to look at for some of the more dramatic differences we see in this sport… like Dressel vs Peaty in the 50m breast. Peaty got off the blocks faster (0.56 vs 0.62), but Dressel completely destroyed him to to the 15m mark. But the only numbers we have right now are reaction time and final time (25.98 vs 26.15). This race especially would be wild since even if we had 25m splits, they turned about even too.

I like the idea of the 15m split time, but that measurement would actually be combinations of reaction time, entry velocity, and underwater streamlining. The 25m split time would be super exciting and I would like to see that!

Quick, hide this from Rowdy, he’ll overdose on reaction times