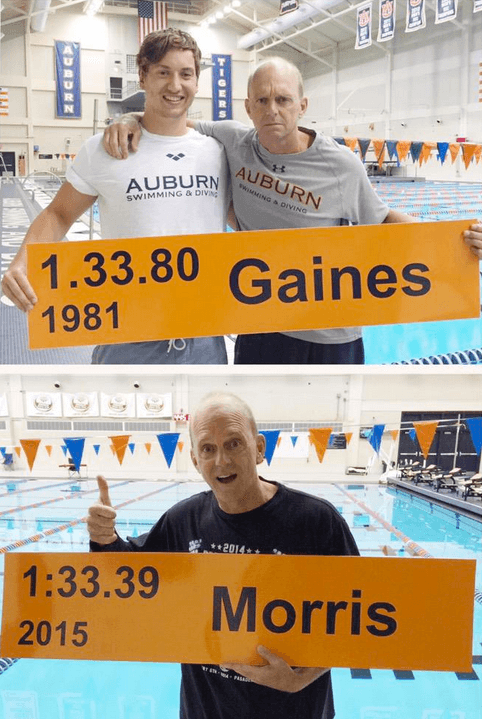 At the James E. Martin Aquatics Center, the plaque which had Gaines' time, name, and the year he set the record was removed to make way for a new plaque which featured all the same information pertaining to Morris' record. Current photo via Twitter/ @RowdyGaines

This past February Hugo Morris broke Rowdy Gaines’ longstanding 200 freestyle Auburn school record leading off the 4×200 freestyle relay at the 2015 SEC Championships, and in the past few days it has been truly recognized.

At the James E. Martin Aquatics Center, the plaque which had Gaines’ time, name, and the year he set the record was removed to make way for a new plaque which featured all the same information pertaining to Morris’ record.

The new record now stands at 1:33.39, just 0.41 seconds faster than the record which Gaines set 34-years earlier in 1981. The record ended up going down on Gaines’ 56th birthday, adding to the excitement behind the record-breaking swim.

With Morris now ranked as the fastest-ever 200 freestyler to hail from Auburn, Gaines’ swim is now moved to the second best, standing at 1:33.80. No other Auburn swimmer has ever been under 1:34.

Morris also cracked the Auburn all time top 10 in the 500 freestyle this season at the SEC Championships with his time of 4:20.66. That currently ranks him as the ninth fastest Auburn swimmer of all time in the event.

Morris, who was born in Australia, just completed his freshman season with the Auburn Tigers. He’s looking to be a crucial part of not only the Auburn relays, but the team’s points total as a whole, next season.

Hugo Morris had an amazing swim. But a 1:33 in a 1981 speedo brief and those old goggles?? Very very impressive. Sometimes I forget how fast that guy was.

Nobody back home knows what Auburn is. If he said ‘oh I’ve got the school record, they would just say – ‘whaddya mean , something like in primary school? You’re up yourself mate.’

Gina Rhinestone – in Australia, Auburn is a fairly well-known brand in terms of American colleges, thanks to Matt Targett and Brett Hawke.

I think his club coach( whom I know ) would be pleased he broke Rowdy ‘s school record as he would definitely know who he was but he would be very disappointed Hugo did not make it into senior Australian ranks . This is what matters in Australia .

I remember Rowdy had the most beautiful stroke when he was at full speed. He was light and fluid almost skimming the top of the water. Not exactly the most powerful guy in the water, but he was a natural through and through. If I am correct, he started swimming at 16 and by the time he was 19 he was a member of the USA World Championship team winning two gold and one silver in West Berlin (1978). It is scary to think what he would have been capable of with today’s technology and training.