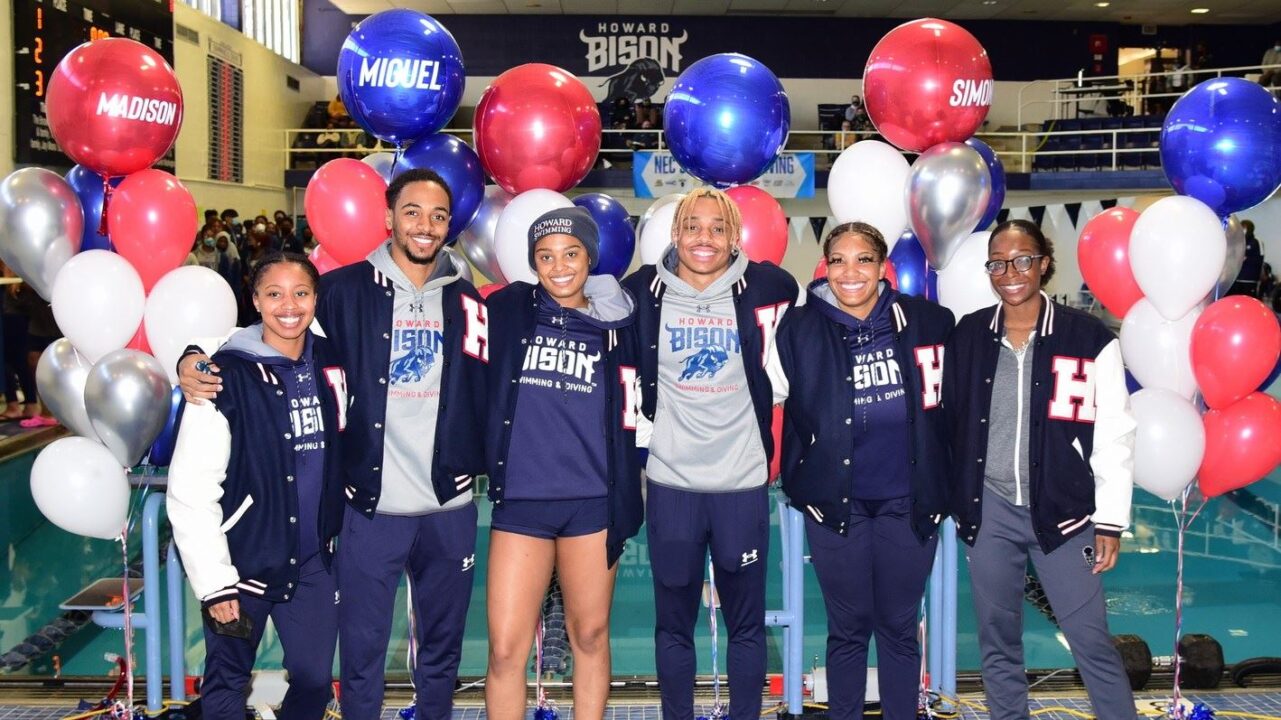 With the win, HU improved to 4-1 overall in dual meets while earning its second NEC victory of the year.

“I’m proud of our team’s performance this weekend,” said Howard Director of Swimming & Diving Nicholas Askew. “Despite the long layoff, we were able to get back into a rhythm and perform well. Also, I’m glad to send our six seniors off with a victory.”

Before the meet, HU recognized six seniors for their hard work and dedication to the program, including men’s seniors Miguel Davis, Jr. (Washington) and Josiah Scott (Cedar Park, Texas).

Overall, the Bison posted 11 wins, including a pair of relay victories.

Beckles, Davis, Simon and second-year Bison Spencer Miles (Lynchburg, Va.) earned first-place in the 200 Free Relay, registering a 1:26.46 time. In that same event, Simon produced a 20.82 mark in the first leg, which landed him seventh all-time in the school’s 50 Free record book.

With the victory, Howard earned its first home win of the season while defeating MSM for the first time in program history.

“I’m proud of our team’s performance this weekend,” said Howard Director of Swimming & Diving Nicholas Askew. “Despite the long layoff, we were able to get back into a rhythm and perform well. Also, I’m glad to send our six seniors off with a victory.”

Jackson capped off her final home meet with a victory in the 100 Breast, recording a 1:11.66 time.

Overall, the Bison posted 11 wins, including a pair of relay victories.

Sophomores Michaela Spears (Chicago) and Aaliyah Young (Burleson, Texas) and freshmen Jorden Hill (Birmingham, Ala.) and Rianna Martin (Coral Springs, Fla.) opened the afternoon with a victory in the 200 Medley Relay, clocking in at 1:51.84.

WASHINGTON, D.C. (January 22, 2022) – Mount St. Mary’s swimming & diving suffered a sweep at the hands of the Howard Bison Saturday at the Burr Gymnasium Pool. The defeats mark the first setback in a dual setting for the men this season, while the women drop to 1-4 in the same format.

Despite the final outcome, there were several bright spots for the Mountaineers. Five athletes set new personal records, including Montana Griffith with her 178.95 score in the 1 meter dive for a second place finish. Three 100 yard free competitors earned top times – Ethan Pham (49.56 seconds), Maddy Samuels (56.24) and Elizabeth Fahrney (1:02.26). Jonah Hancock secured a new personal best with a 1:00.45 in the 100 backstroke.

Two more Mountaineers won their individual events. Jason Fitch won the 100 backstroke with a time of 52.43 seconds, while Meghan Speicher took first in the 500 free, finishing in 5:24.55.

The Mount wraps up their regular season next Saturday (Jan. 29) at Loyola.