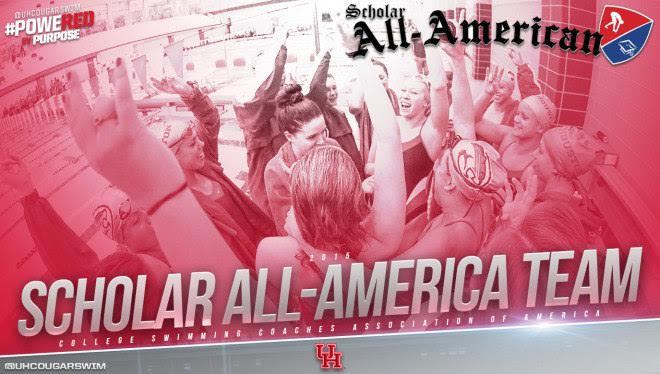 NORFOLK, Va. – The University of Houston Swimming & Diving program was honored for their strong efforts in the classroom on Tuesday, as they were named a Scholar All-America Team by the College Swimming Coaches Association of America. In addition, Cougar divers Micaela Bouter, Natasha Burgess and Danielle Shedd were honored as Honorable Mention Scholar All-Americans.

The Cougars qualified as a Scholar All-America Team by posting a team GPA of 3.11 during the spring season. Individually, 15 of the 22 members of the UH roster finished with a GPA of 3.0 or above, and 100% of the team finished the season in good academic standing.

The Team Scholar All-America award is presented to college and university swimming & diving teams who have achieved a GPA of 3.0 or higher in the semester coinciding with the NCAA Swimming and Diving Championships.

Bouter, Burgess and Shedd each earned individual Scholar All-American honors by finishing the semester with a GPA over 3.5 and qualifying for the NCAA Zone Diving meet in March. Each of the three Cougars also grabbed spots on the All-American Athletic Conference Team, with Shedd winning the 1-meter dive at The American Championships.

Overall, freshman Caitlin Horner posted the highest GPA on the Houston team, ending the semester with a perfect 4.00 mark.