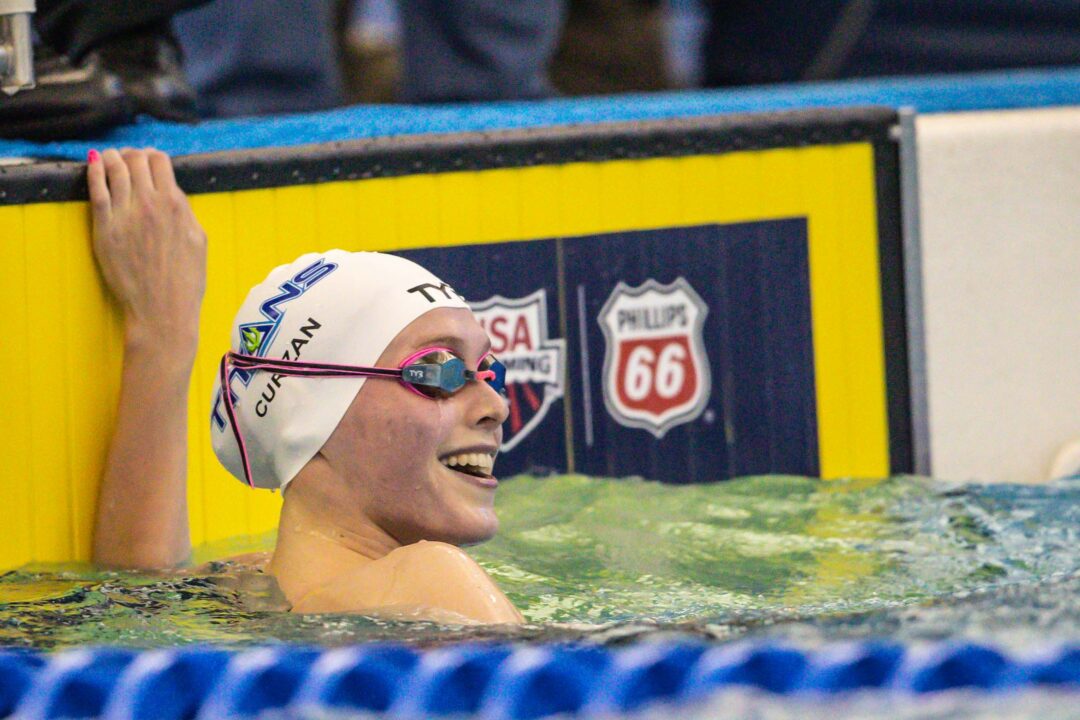 TAC Titans' star Claire Curzan is one of a slew of USA Swimming stars that developed on the eastern seaboard and should make noise in Budapest next month. Current photo via Jack Spitser/Spitser Photography

This past weekend the United States held their International Team Trials, naming 41 athletes to their 2022 World Championship team. The team has its National Team mainstays like Katie Ledecky and Caeleb Dressel, but looking a little deeper at the roster shows an interesting trend: a shift of US Swimming talent developing on the east coast, especially in the southern Mid Atlantic states of North Carolina and Virginia.

California has long been considered the best swimming state in the Union. With its massive population, proximity to the ocean, strong youth aquatics culture and relatively easy access to outdoor, especially long course, pools, California possesses all of the tools to be the swimming powerhouse it has long been.

For decades the state of California has been the epicenter of USA Swimming development. In the 1960s, legendary coach George Haines developed Don Schollander and Mark Spitz, among scores of others, to Olympic glory at the Santa Clara Swim Club in the Bay Area. In the 1970s came Mark Schubert’s first tenure with the Mission Viejo Nadadores, producing Olympians such as Shirley Babashoff, Brian Goodell and Sippy Woodhead. In addition to those fabled groups, Olympic legends like Matt Biondi, Janet Evans, Pablo Morales, Dara Torres, Summer Sanders, Anthony Ervin, Aaron Peirsol and Natalie Coughlin all spent their formative years on the California swimming circuit.

However, only two athletes on the 2022 Worlds team, Cal’s Trenton Julian and Georgia’s Luca Urlando, grew up and did the entirety of their club swimming in the Golden State. A third, Erika Brown, grew up in the Bay Area swimming for the Pleasanton Seahawks before moving to Charlotte, North Carolina in high school and developing into an international-level swimmer in college at the University of Tennessee.

In addition, the perennially strong southern California elite swimming scene only had two swimmers qualify for the team, Michael Andrew, who trains solo near San Diego, and Justin Ress, who just joined Mission Viejo’s pro group last month. While northern California has some of the best high performance training groups in the country, including Greg Meehan’s Stanford women and Dave Durden’s Cal men, from a developmental perspective, the state as a whole seems to be experiencing a bit of a swoon compared to its proud history.

Contrast this to athletes from the southern Mid-Atlantic states of North Carolina, Virginia and the Washington D.C. metro area selected to the team. Phoebe Bacon, Claire Curzan, Torri Huske, Katie Ledecky, Justin Ress and Charlie Swanson, in addition to the aforementioned Brown who swam for SwimMac in high school, will all compete in Budapest next month.

According to USA Swimming’s Virtual Club Championships rankings, which is an algorithm that USA Swimming uses to measure overall strength of their member clubs, the top 5 teams from the 2021-22 short course season all hail from North Carolina, Virginia or the D.C. metro area. The TAC Titans, home to Claire Curzan, top the list and are followed by SwimMac Carolina in Charlotte, Nation’s Capital Swim Club, NOVA of Virginia and Rockville Montgomery.

Comparatively, the combined populations of North Carolina, Virginia and D.C. are less than half that of California, so there is certainly something more at play. Some of the top club coaches in the country, including TAC’s Bruce Marcionda, SwimMac’s Chuck Bachelor and NCAP’s Bruce Gemmell and John Flanagan, mainstays of USA Swimming’s National and National Junior Team coaches roster, call this region home.

So can we definitively say that Virginia and North Carolina have supplanted California as America’s swimming hotbed? It may be a bit premature to declare the southern Mid Atlantic the winner, but if these trends continue it may not be too far in the future.

thanks alot of information

Y’all sleep on Ohio dreadfully for summer swim leagues. Everyone I knew in Cincinnati did summer league growing up, and there’s tons in Toledo, Cleveland, and Columbus too.

Why no direct mention of Maryland in the article? They may be the biggest producer of star swimmers in the mid Atlantic

I think you’d have to look at population growth trends 16-25 years ago, right?

Based on an eyeball trend, nothing obvious. North Carolina had a huge population growth in the 90s, but California and Colorado did too. Nevada grew 66% in the 90s, so I’m sure that has something to do with the rise of the Sandpipers. The West was the fastest-growing region in the 90s.

I wish I could remember where I read it, but I read something once about a correlation with a mid sized population. I think it was MLB. Big enough to have quality resources, but small enough to have space. The DMV and NC seem to be ripe for that kind of situation.

How is it possible that the state of Maryland isn’t mentioned a single time in this entire article? If you are going to accurately discuss the strength of swimming in the mid Atlantic, Maryland has to be directly mentioned. Virginia gets direct mention but Maryland is lumped into “the dc metro area”. It is no coincidence that the greatest male swimmer of all time and the greatest female swimmer of all time were born and raised in Maryland, 30 miles apart from one another.

There are a number of issues. 1) There are too many organized sports in California (SoCal is oversaturated with options – the great weather!) and parents and kids are attracted to more fan friendly/team sports activities. Also most of these sports require less practice time than swimming (ie. Soccer, Lacrosse, Basketball, Volleyball). 2) Demographics. Swimming is still seen as a predominantly white sport and California is the most diverse state in the country. California swim isn’t doing enough to diversify while other sports are. On the same line, there aren’t enough minority coaches in California to attract a diverse population. 3) Athletes that would be good swimmers (ie. thin and tall) are attracted to other sports where Californians dominate like… Read more »

CIF forces athletes to be unattached during the high school season, so that will limit the VCC results in California. Has to be one of the dumbest and most pointless rules in terms of swimming. This and the c/b/a meet formats limit swimming in the pacific lsc.

Missing out on Feb-May results for high school aged athletes is a reach for why California teams are not making the top 20 in VCC results. That is a thin amount of swimmers. Not to mention Sectionals in March swimmers are allowed to attach to clubs, so there is a rest meet available to those swimmers that counts for VCC