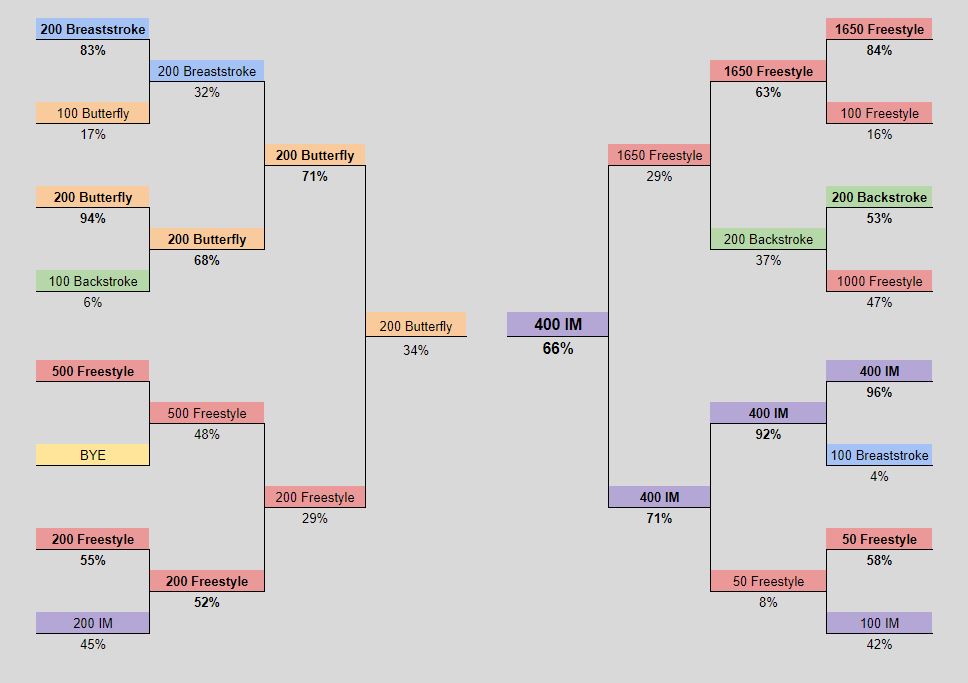 Congratulations 400 IMers. You've been voted the hardest event by a wide margin. But you still have to swim the 400 IM, so are you really the winners here?

Congratulations 400 IMers. You did it. You’ve been voted the hardest short course yard event by a wide margin. But you still have to swim the 400 IM, so are you really the winners here?

Not a major shocker here. The 400 IM has been the odds-on favorite from the beginning. One of the most universally-feared races, the 400 IM gets points for distance (the fourth-longest event in our poll), but also hits every single swimmer’s weakest stroke. It requires a brutal mix of versatility and endurance, and never got less than 66% of votes in any round of our poll.

Meanwhile the 200 fly got about a third of the total votes in the final, holding up as the #2 event in our poll. The 200 fly also got more votes against the 400 IM in the final than the mile did in the semifinals – that speaks to the 200 fly’s place in the final, despite some chatter that the 1650FR/400IM semifinal was the true championship matchup.

Endurance topped strategy in our consolation match. The 1650 carries the flash of being by far the longest event in our poll. The 200 free made a somewhat surprising run to the semifinals, though, based on its strategic trickiness – many describe the 200 as too long to sprint but too short to pace. The end result is a tough race to approach and a razor-thin margin for going out too slow or too fast. In the end, though, the roughly fifteen-to-twenty minutes of pain in the mile outdid the pain of a 200 free many minutes shorter.

Because you were a 2flyer

Vote Up130Vote Down Reply
Someone who swam once

Vote Up80Vote Down Reply
Oh my

Not surprised, a 400im is way more exhausting than a 200fly on the lungs by a lot.