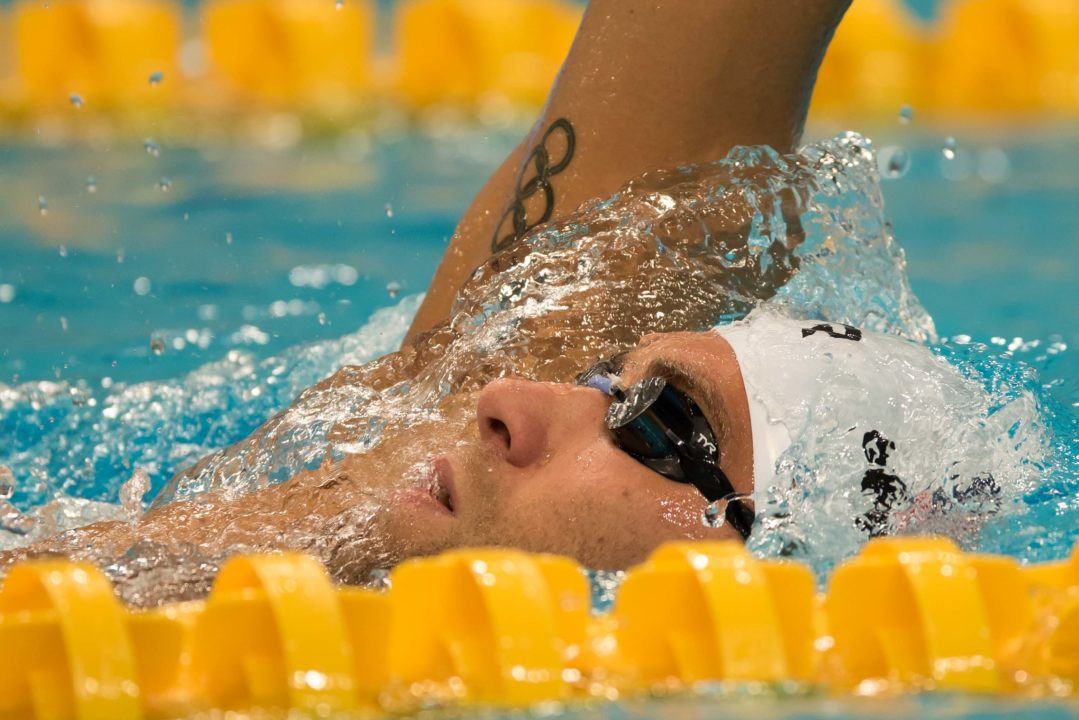 "I think Michael might come back. After watching this meet he might get the hitch. I know he is a competitor and he might want to help out.” Current photo via Mike Lewis/Ola Vista Photography

American backstroker Matt Grevers had a great end to the 2017 FINA World Championships in Budapest, Hungary, picking up 2 medals on the final night of competition. He got the ball rolling in the 50 back, clocking a 24.56 to bring home the bronze. That was the 2nd fastest swim of his career and just .02 shy of his personal best 24.54 from the 2013 World Championships.

“I love 50s at the World Championships because I think it allow us to stay longer in the sport. Everyone can swim a 50,” said Grevers. “I inspired myself here in Budapest. It feels great. I will keep my motivation up and continue my progression.”

In the last event of the session, Grevers took on the backstroke leg of the men’s 4×100 medley relay. He’d already swum the 100 back plenty of times at this meet (prelims/semis/finals of the 100 back, finals of the mixed 4×100 medley relay), but this last one was his fastest. He hit the wall in 52.26, tying Ryan Murphy for the 9th fastest time ever done by an American and putting up his fastest performance since his 52.08 and 52.16 from the 2012 U.S. Olympic Trials and 2012 Olympics respectively.

Grevers also shared his thoughts on whether or not Michael Phelps would come out of retirement again:

“I think Michael might come back. After watching this meet he might get the hitch. I know he is a competitor and he might want to help out.”

I hope he doesn’t. Might be his undoing. Also, time to move on.

Phelps should go for the 200IM.
He could win it in Tokyo.

Phelps has always had a crazy schedule, even in 2016. If he dropped the 200 fly and and a relay his 200 IM could be dangerous. 1:54.6 in Rio after 3 200 flys and a relay. That and he lost basically all of his momentum when he hit the wall in breastroke. If Michael swam a normal schedule then he can still win gold medals.

Pretty surprised about some comments here.

So, just to remember..

Phelps has been a swimming genius capable to have incredible amount of golds (real, not mixed relays..), northeless his first Dui, to signal personal troubles, was right after Olympics2004, when Phelps was only 19.
And he was so strong and successful in 2007-2008 (when he won 5 individual races and overcome the famous Spitz’s feat made when swimming was far less competitive) that his prime swimming career finished there, at just 23..
So, other personal issues and the incredible rebound at Worlds2009, after a few months of training, with the WRs in 100 and 200 fly, still there, and the victory vs Cavic.
And thus, another end… Read more »

Everyone can swim a 50 ??? Really, Grevers ? I am not a routine swimmer, I only swim occasionally. Currently, I think I will struggle when swimming 50m free. 🙂 I would choose to swim 25m fly rather than 50m free if someone asks me. 🙂 That being said, I know, he must have talked about competitive swimmers.

I recall Grevers saying 2017 (after not making the team in 2016) would be his last year so he could go out on his terms. Looks like that may change. Solid guy to have around for this young and talented group of swimmers coming through now. He’s proved he can still contend on a big stage.

Don’t think he expected 4x medal performance, and a handful of sub 53 swims

Pretty insane that he got to within 0.2 his lifetime best from 2012. It’s amazing to look at it now, how many swimmers perform WAY better the year after the Olympics are over.

Training for several more years for one individual event (200IM) would not be worth it to him. If he decided to do it though, there is zero doubt in my mind that he would at least medal – let alone get gold.

It’s all about whether he feels like he wants to come back. If he doesn’t that’s totally fine and he has the right to make that decision. But if he does come back, it would mean that he REALLY wants to. If he was to swim the 200IM, he would have to put in a lot of great training – he would be fit enough to contest other events too, but it would be all about what he WANTS to do. Maybe for the first time in almost 20 years, he’d love to swim a reduced program at meets and not have to worry about pulling off doubles in the same session – just focus on doing one individual event… Read more »

I could easily see him coming back and going for 5 straight in the 2 IM, then swim relays