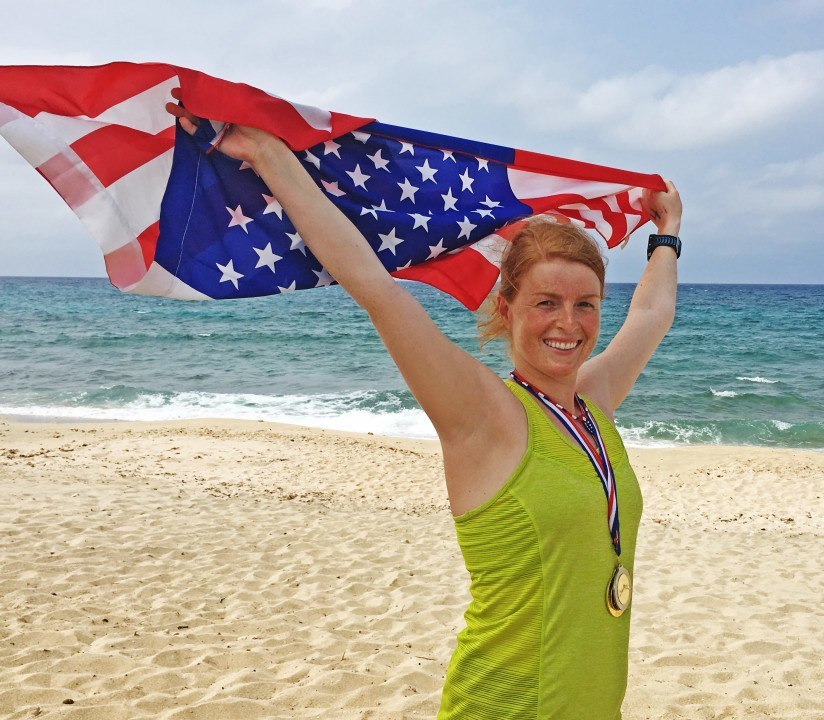 We are the first U.S. swim club to compete in Cuba as part of a four-day event hosted in Varadero, Cuba by the Federación Cubana de Natación (Cuban Swimming Federation).

I recently had an amazing opportunity to travel to Cuba with nine other swimmers, two coaches and four friends and family members from my open water swim club, to compete in the XI Masters Internacional de Natación pool and open water swim competitions. We would be the first U.S. swim club to compete in Cuba as part of a four-day event hosted in Varadero, Cuba by the Federación Cubana de Natación (Cuban Swimming Federation). Among the competing teams, nine were from Cuba and one was from Italy. Our team, Water World Swim of San Francisco, made eleven. Competitors ranged in age from 23 to 97, and included such world-class athletes as 2008 Cuban female Olympian, Heysi Villarreal – who of course, was in my age group – and Italian male professional marathon swimmers Edoardo Stochino, Simone Ercoli and Rodolfo Valenti. Events during the three days of pool competition consisted of 50s and 100s of all strokes, including 100 meter Individual Medley, as well as female, male and mixed 100 meter Freestyle and 100 meter Medley relays. A three-kilometer open water swim took place on the fourth day at Varadero Beach.

When we arrived at the pool on the afternoon of March 31, 2016, it was hot and humid. Upbeat Latin pop music played over the speakers and swimmers were already in the pool warming up. We checked in with the race officials, set up camp under a tent we shared with one of the Cuban teams, and hopped into the pool for warm up. Like most of the buildings we saw in Cuba, the pool showed signs of aging and was in need of repairs. The backstroke flags were worn and faded, the lane lines were missing some of the plastic segments and the lines on the bottom of the pool were washed-out. The pool was 25 meters and had small, concrete diving blocks at one end with bleacher seating on one of the long sides of the pool. Many of the Cuban swimmers wore worn out swimsuits and some swam with no swim cap or goggles because of the cost. I later asked my group’s tour guide how the traveling teams could afford lodging and meals for the open water swim in Varadero. He explained that the government paid for their travel expenses.

I have attended many USA Swimming and U.S. Masters Swimming sanctioned swim meets over the course of my life, but this meet was unlike any other meet I’ve attended. The meet started with all the teams parading around to one of the long sides of the pool with signs to indicate their club affiliation. The Cuban, Italian and American flags were at one end of the pool and Secretary of the Cuban Swimming Federation, Tomás Haces Germán, stood across the pool from us. He said a few words to open up the meet and then the Cuban National Anthem played. I could see how proud the Cuban swimmers were of their country as they sang along with enthusiasm. Despite the simplicity of the pool, this felt like one of the most important meets I’ve attended because of the grandeur of the opening ceremony. In between events and during races, either Latin or American pop music was playing over the speakers and everyone was dancing, talking with swimmers outside of their own teams and having a good time. No one was on their cell phone because few people had service. It was a welcome change from the U.S. and I believe this only added to the quality of our time in Cuba. Each lane only had one timer and of course, there were no touchpads. There was no warm-up/down lane, so aside from the open warm up at the beginning of the meet, the only other time we could get in the pool was when we were competing. I was surprised, but happy to see the familiar Hy-Tek heat sheets with our heat and lane assignments.

The Cuban swimmers were very friendly and welcoming. Some of them spoke English very well, but most only knew a few words of English or none at all. I struggled to remember what I learned from all those years of high school and college Spanish, but in the end, I was able have basic conversations in Spanish.

On the third and final day of pool competition, there was an awards ceremony for the top three male and female swimmers in each age group for overall points. The ceremony was one of the most beautiful awards ceremony I’ve seen out of any age group or U.S. Masters Swimming meet I’ve attended. The podium was stationed on the opposite side of the pool from the bleachers with the Cuban, Italian and American flags standing proudly behind the podium. Each age group started with ceremonious music and one by one, the winners were called up to the podium to receive a medal. We had four swimmers (including me!) place in the top three of their respective age groups.

For the open water swim at Varadero Beach, we reported in at 7:00am for a brief physical exam and body marking. Varadero Beach is white and sandy and the water is a beautiful and clear aquamarine blue. I laughed when two of my new Cuban friends complained that the water was “muy frio!” Currently, water temperatures in the San Francisco Bay where I swim are 54°F. In contrast, the 80°F water at Varadero Beach felt warm.
Around 9:30am, we were off! The course was one of the lesser exciting open water course formats I’ve experienced (six times around a rectangle 200 meters wide by 50 meters long), but I was in awe of the crystal clear water and the little sardines I could see swimming down below me. This was another stark contrast to the San Francisco Bay, where I can rarely see past my hand when swimming.

Like the pool competition, the open water swim concluded with a beautiful awards ceremony, highlighted by a backdrop of the beach and beautiful ocean water. We had twelve swimmers (including me and our Head Coach, Pedro Ordenes) place in the top three of their respective age groups. Overall, Water World Swim won a total 16 medals for the pool and open water swim events combined.

This trip was an incredible experience I will never forget. I met such wonderful people and each person had an interesting story to tell. I also have a deeper sense of appreciation for what I have here at home and the ease with which I can purchase what I need or want. While nothing official is scheduled yet, we hope we will be invited back to Cuba to compete next year!

Cool story.
Finally after decades of stupidity, USA and Cuba speak to each other again.
Great for both countries.

I agree with Bobo. Sports and music can sometimes transcend politics. I watched the Vice segment recently on how hip-hop culture and other aspects of youth culture, including sports celebs, delivered by smuggled technology/media, were the engines that drove the political changes that finally led to the Cuba/U.S. detente. I love this part: “In between events and during races, either Latin or American pop music was playing over the speakers and everyone was dancing, talking with swimmers outside of their own teams and having a good time. No one was on their cell phone because few people had service.” Ah, the good old days! I remember long-ago age group meets where dance contests and watermelon seed spitting contests were almost… Read more »

Will they take back Lying Ted?