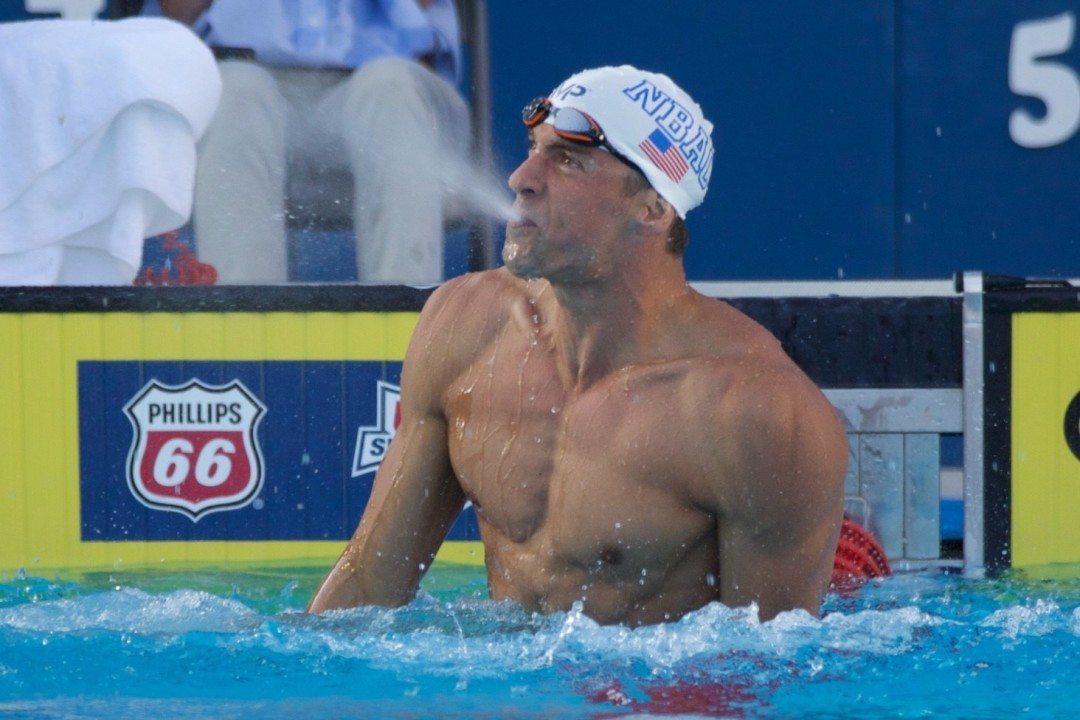 The race of the ballot right now is men's race of the year, in which Connor Jaeger still narrowly leads Michael Phelps in voting by a single percentage point. Archive photo via Rafael Domeyko

It’s been just about a month now since voting opened on USA Swimming’s Golden Goggle Awards, and its time for another update on the voting totals.

We last did an update about 3 weeks ago. The number of votes cast has almost tripled since then, from 3000 to almost 9000, but the same nominees continue to lead each category.

The race of the ballot right now is men’s race of the year, in which Connor Jaeger still narrowly leads Michael Phelps in voting by a single percentage point. The interesting question there is whether Phelps is cannibalizing his own votes, as he has two separate races nominated. We’ll discuss that and more in some quick voting recaps below.

A few links of note before we begin:

YOU CAN VOTE FOR THE 2015 GOLDEN GOGGLE AWARDS HERE.

Here’s a quick look at the horse race as it currently stands, with the change in percentage points since our last update in parentheses. Current leaders are in bold:

Facebook is down a whole 4%. I think this whole Facebook fad is really starting to pass, guys.

Wilimovsky is making up some ground on Worrell here, but it’ll take a lot more to pass her for the award. Two factors work against Wilimovsky: open water’s profile is significantly lower than pool swimming, and some fans may be voting for Wilimovsky in a different category instead, while this is Worrell’s only nomination. Really, all three are pretty worth candidates for this award.

Schmitt continues to dominate this award with over half of the votes cast. Maybe if Jaeger can “persevere” in his tight Race of the Year battle with the greatest swimmer of all-time, he’ll also earn some more votes here.

This one really feels like a toss-up between a lot of qualified coaches, but Gemmell continues to hold a comfortable lead. We mentioned it last time, but the point still stands: any nominee associated with Katie Ledecky is doing great at this point. She’s like King Midas: anything she touches turns to gold – Golden Goggles gold.

If the Midas Theory holds up, Ledecky’s role on the 4×200 free relay will power that team to victory. They still lead by a wide margin. It probably helps that mixed relays are still not quite into swimming’s mainstream enough to gain significant votes.

This could have been one of those cases where Ledecky’s three nominated races split votes and ultimately made her win more iffy, but there’s really no Ralph Nader scenario big enough to deny Ledecky this year. Her 1500 is starting to pull away from the field, which is something Ledecky has plenty of experience doing.

This is the race that might be coming down to a Phelps-Cavic photo finish. Jaeger’s 1500 free still leads Phelps’ 200 fly by a single percentage point, or about 48 votes (at the time of this story). It’s worth noting that Phelps 100 fly has siphoned off 9% of the votes – it’s hard to speculate on how many of those votes would have rolled over into Phelps’ 200 fly had the 100 not been nominated, but it’s safe to say Phelps is being hurt a bit by having the votes of his fans split between two nominees.

Jaeger, of course, excels in endurance through long races, but Phelps is also known as a great closer. Time will tell which one gets the touch in a race of votes rather than seconds.

If there’s one “lock” on this ballot, this is it. Haley Anderson is gaining some steam, and probably deserves second here based on her World Champs gold compared to Franklin’s individual silver and bronze medals. Franklin also has three relay medals (two of them gold) though, which boosts her status some.

Almost no change in this category since the votes opened. Voters are still rewarding Phelps for his world-leading efforts over Lochte’s and Wilimovsky’s gold medals at the World Championships.