GoFundMe Launched to Raise $600,000 for IOC Member Convicted of Corruption 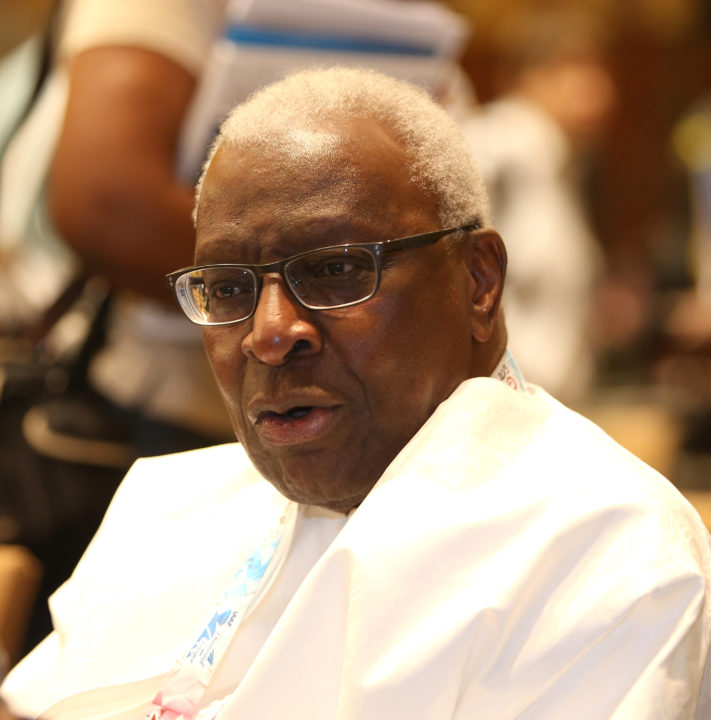 Lamine Diack, 88, was convicted in France in connection to accepting bribes to interfere with doping investigations against Russian athletes. Archive photo via Vinod Divakaran, Doha Stadium Plus Qatar (CC 2.0)

The family of Lamine Diack, the former president of World Athletics, has started a GoFundMe account to raise money to return their father to his home country Senegal. The 88-year old Diack was banned from leaving France in December after being found guilty of corruption related to his role at the head of Olympic sports.

In September, Diack was sentenced to four years in prison in the scandal connected to Russian doping. Two of the four years of that sentence were suspended, and because of his age, he has not had to serve any jail time. Diack was ordered to pay a fine of half-a-million Euros, or about 600,000 US Dollars. He has been under house arrest in France since 2015.

While Diack was found guilty on several corruption charges, he was excused on a charge of organized money laundering.

The fundraising group on GoFundMe shows Seydou Diack, N.K. Diack, Bineta Diack, Anta Diack, Mohamed Diack and Katifa Diack as organizers. His son Papa Massata Diack, who was also convicted as part of the scheme and sentenced to five years in prison plus a 1 million Euro fine, is not listed as an organizer. Papa Massata Diack is currently in Senegal, which refuses to extradite him: likely a contributing factor in France’s desire for a large bond.

As of posting, the fundraiser has brought in €17,398 ($21,068). While many of the donations, including some very large ones, are anonymous, included on the list of public names are names of leading Senegalese figures in business, culture (including actors), politics, and even an IOC member.

Lamine Diack was the president of IAAF, the international federation for athletics. He led that organization from 1999 until 2015. Diack was arrested in France in 2015 as allegations of corruption began to come to light. He was found guilty of corruption and breach of trust, while he was acquitted of money laundering. According to The Associated Press, Diack was involved in a scheme that allowed Russian athletes to escape doping sanctions by paying “hush money.”

Lamine Diack admitted in court that he slowed the handling of Russian doping cases “for the financial health” of the organization. Prosecutors said he solicited over 3 million Euros (about $3.5 million in U.S. Dollars) in bribes.

Papa Massata Diack was linked to a Singapore-based organization called Black Tidings that received payments of $2 million prior to the 2013 vote to award the Olympic Games to Tokyo. Lamine Diack was a voting member of the IOC at that time.

Why should people help him escape punishment for a crime that he committed?

They shouldn’t, but you can’t blame the guy for asking for free money.

Blame those who contribute.

Let him rot in jail.