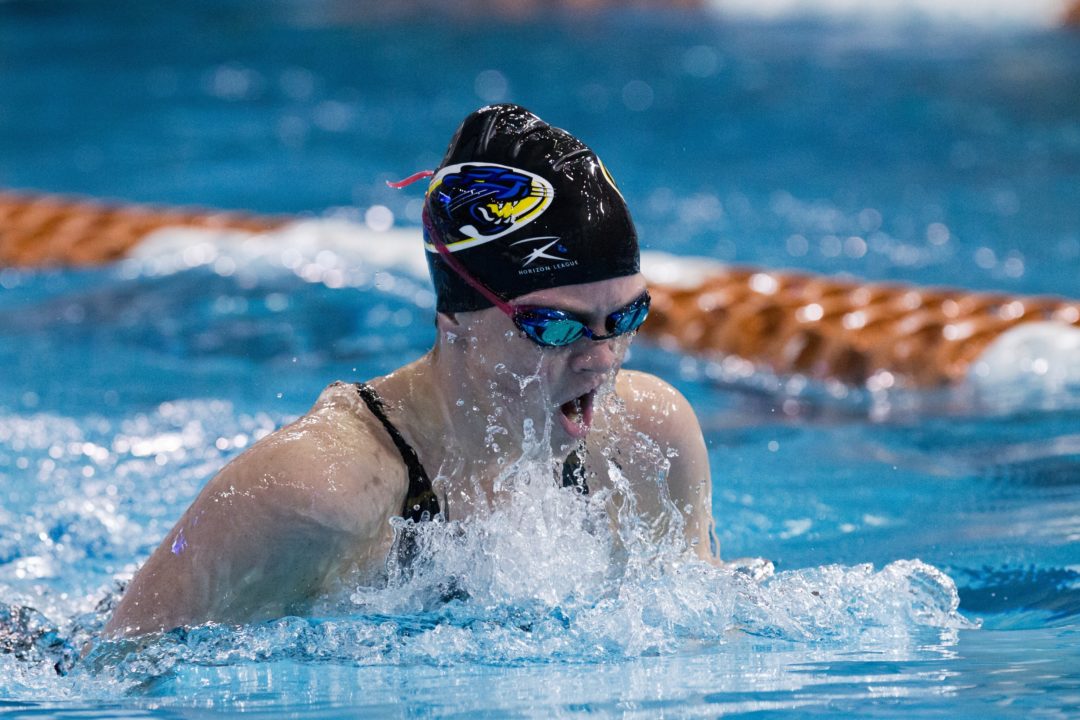 The biggest 5 or 6 conferences tend to dominate the headlines, but they're far from the only homes for fast swimming. Meet 6 women with top-10 NCAA seeds coming from the smaller conferences. Archive photo via Tim Binning/TheSwimPictures.com

As some of our pre-NCAA analysis has shown, NCAA invites tend to be heavily stacked in the 6 biggest conferences. But the national championships are also a great opportunity for elite small-conference swimmers to put their teams and conferences on the map on college swimming’s biggest stage.

To help us all get more prepared for what should be a wild national championships field next week, here’s a quick “Get to Know ‘Em” with 6 highly-seeded athletes from teams and conferences swim fans might not have heard much about. These women have all punched their tickets to the national championships from smaller, less-heralded swimming conferences, so if you like rooting for an underdog, here are some good picks. Then again, they’ve all got top-10 NCAA seeds (listed under their names) on their resume, so the phrase “underdog” might be a bit of a misnomer. Either way, here’s your chance to ‘Get to know ’em’:

McClellan is wrapping up her final season as queen of the Horizon League, where she’s been named Swimmer of the Year in each of her four collegiate seasons. She’s an amazing 12-for-12 in individual races at the conference championship level and holds Horizon League records in the 100 breast, 200 breast and 200 IM. In addition, she’s a former U.S. Open champion and won a bronze medal at the World University Games last summer. McClellan is a native Wisconsin-ite, which led her to UW-Milwaukee, where she is studying American Sign Language. She was a three-sport athlete coming out of high school (adding softball and basketball to her repertoire) and also mentions 4-H involvement in her UWM bio.

In her first year, Apostalon has taken the Mountain West Conference by storm. Winning MWC Swimmer of the Week multiple times during the season, Apostalon topped those accolades with the conference’s Freshman of the Year and Swimmer of the Year awards. That came after she set three new conference records at the MWC Championships while winning the 50 free, 100 free and 100 back. She’s seeded in scoring position in all three races at the national championships. Apostalon is originally from New Mexico where she gained plenty of experience at rewriting record books. In addition to a top swimming prospect, Apostalon was a highly sought-after water polo recruit, and she also competes in that sport at San Diego State.

Herrington returns to the NCAA Championships with her eye on a top-8 finish and All-America honors for the Runnin’ Rebels in her senior season. She took 15th in the 100 fly at the national championships back in 2012 before just missing the B final as a junior, when she wound up 19th. This year she’s one of an astounding 13 women already under 52 seconds, as she put up a 51.48 to win the Mountain West title in the event. That was truly saving her best swimming for last in her college career – it was a drop of seven-tenths off her lifetime-best. The native Californian will try to top that time again in what’s going to be  dogfight of a field. She’s also wrapping up her meetings and event management degree at UNLV.

In her four years, Ward has ruled the Mountain Pacific Sports Federation, winning a total of 18 titles at the MPSF Championships. This year added 6 titles to that list including a pair of conference records. That led to being named MPSF Swimmer of the Year, and the scary part is that Ward likely still has more in the tank in her best event, the 100 fly. She put up a 51.76 at the Texas Invite back in December and cruised to the MPSF Championship with a 52.2 a few weeks ago. Ward wound up a UCSB after a strong high school career at Campolindo High School in California, and she’s now studying bio-physiology in Santa Barbara.

Another fast-rising freshman, Toussaint joined FGCU this season from the Netherlands, and she’s made an immediate impact. At the CCSA Championships she won all three of her individual races, breaking meet and conference records in all three. Included in that was a tough 200 free/100 back double – Toussaint went after the back in prelims, putting up the 51.68 that now ranks her ninth in the NCAA seeds, and merely cruised to a finals win in that race two events after crushing the 200 free records. Toussaint will forego that double at NCAAs, so she might have even more time to cut swimming that backstroke fresh. Named CCSA Swimmer of the Meet, Toussaint is no stranger to swimming success: her mother Jolanda de Rover was an Olympic gold medalist in the sport back in the ’80s.

The Denver Pioneers have had an outstanding season, and Corea has been a huge part of it. The 2013 WAC Swimmer of the Year adapted well to a new conference as she was named Summit League Swimming’s Championship MVP after going 7-for-7 on wins with 7 conference records at the Summit League Championships. With one year of NCAA experience under her belt, Corea will hope this is the year she breaks through to the scoring level, and the signs look good: she’s seeded in the top 8 in that crazy 200 backstroke field. A native Canadian, Corea has represented her country in international competition, most notably the 2011 Pan-American Games in Mexico. She’s studying English at Denver, and also lists photography as a passion and potential future career path.