Georgia’s Eva Merrell Out for the Season with Torn ACL 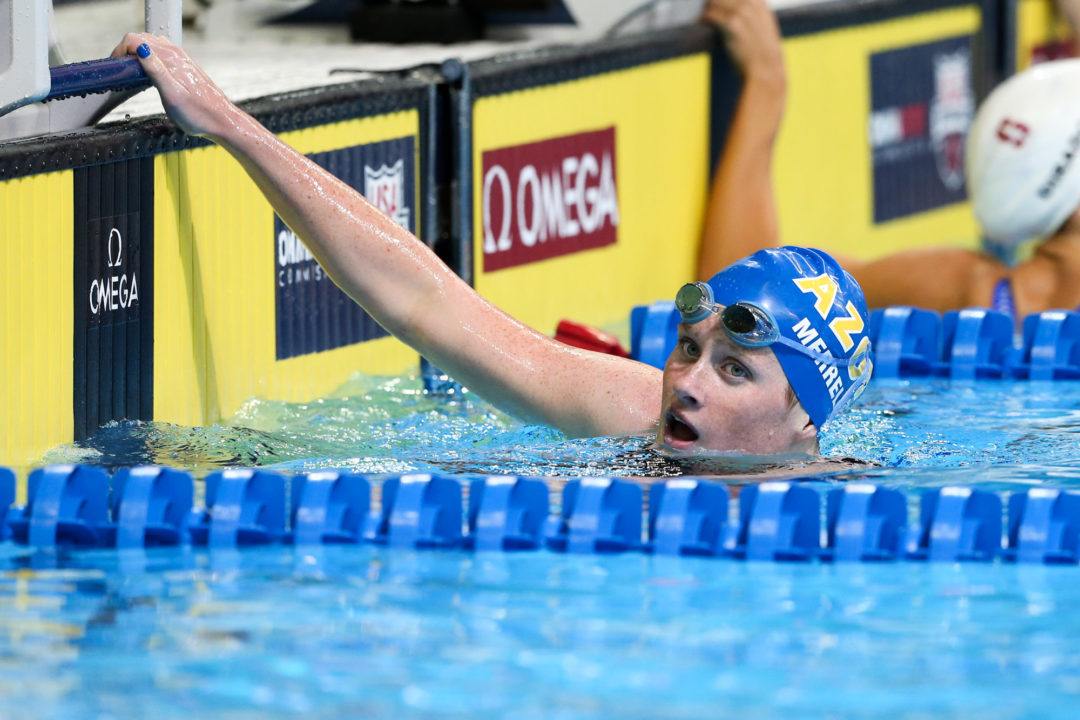 Merrell, who was expected to make her collegiate debut this season, confirmed she will undergo surgery and sit out the year. Archive photo via Tim Binning/TheSwimPictures.com

The University of Georgia’s Eva Merrell, SwimSwam’s top recruit out of the high school class of 2018, will miss the remainder of the 2019-2020 season after sustaining a torn ACL and “a couple other minor injuries to [her] knee” last month, she told SwimSwam Thursday.

She has been advised that undergoing surgery will be the best option for her recovery.

“After being assessed by my doctor and getting a MRI, I have been told I will be out for the remainder of the season and that surgery will be the best way to ensure that I can be strong and healthy moving forward,” she wrote in an email. “Obviously this is not how I would have wanted my year to go, but I will take it in stride and move forward! As always, I can’t wait to watch the dawgs race and compete this season!”

Merrell was expected to make her collegiate debut this fall after struggles with physical and mental health kept her sidelined during what would have been her freshman season and ultimately brought her back home to California for treatment throughout the spring. She had returned to Georgia over the summer to take classes and train.

A two-time USA Swimming Scholastic All-American in high school, Merrell broke a total of seven CIF-Southern Section Division II records during her senior season of high school. Merrell won the 200 back in the Big Ten vs. USA College Challenge meet in the fall of 2016, dropping 5.2 seconds to go a lifetime best of 1:52.20. She also went a PB in the 100 back to finish third.

At 2016 Olympic Trials she was a finalist in both the 100 fly and 200 back, finishing fifth and sixth, respectively. Merrell traveled to the FINA/airweave Swimming World Cup 2016 with Team USA and raced at 2016 Junior Pan Pacs. Her last race official race was in August 2017 at the U.S. Open Championships in New York.

Hopefully she can get a redshirt if she wants it!

It sounds like they’re pretty liberal with those these days (college football players can play in 4 games without burning their redshirt). I can’t imagine they wouldn’t give her the option.

She seems like the perfect candidate for a medical hardship/6th year waiver tbh. I wouldn’t doubt the NCAA would give her one should she apply.

@hookem91 that’s exactly why the NCAA wouldn’t give her one!

I disagree. I think they would get one. I know several who have gotten a 6th year and don’t know any who have been turned down.

Yeah, the “6th year” hardship rules exist essentially for this exact case. If she wants one, I suspect that they’d give her one.

Graduating and starting a career >>> 6 years at University unless she can get a productive graduate degree in that time frame.

I hope she didn’t tear her ACL at a party. Those stories are heard way too often.

Is there an echo in here?

Do I hear an echo?

Ya I think there’s definitely an echo

I hope she didn’t tear her ACL at a party. Hear those stories all too often.

In the long run it doesn’t matter. It’s horrible to hear about anyone tearing anything. I don’t care the situation I just care about them healing

Oh, man! Swimmers! 99% of us should be bubble wrapped and wear crash helmets when we’re out of the pool. I was forever spraining ankles, pulling muscles, and generally clumsy-buffooning my way through high school and college.

Best of luck to her with recovery and rehab.

Praying for a speedy recovery Eva!

She’s a strong girl and will pull through. She’s got great perseverance and rooting for her big comeback!