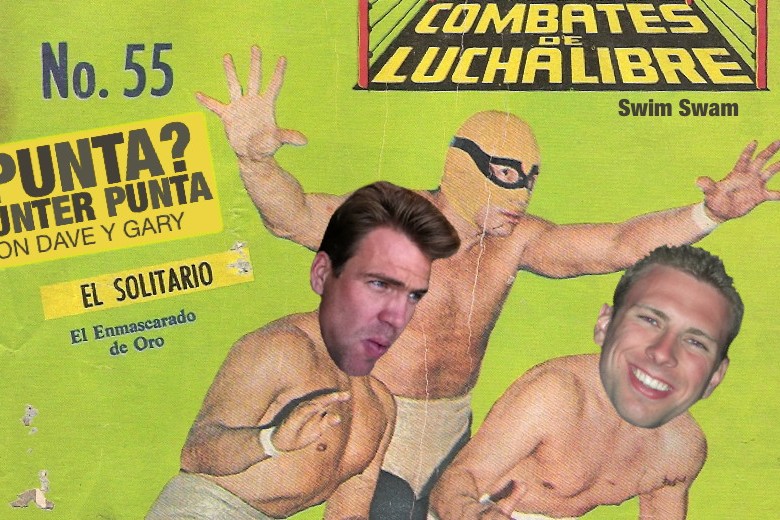 Gary educates David on why @MamaPhelpsH20 is unbeatable in her upcoming competition.

David: Where do you want to go today?

Gary: I would like to explore the DP phenomenon.

David: That’s not appropriate for Swim Swam, Gary. This is a family website.

David: The bestselling author of A Mother for All Seasons: A Memoir?

Gary:  Yes. I’m going there. America’s Mom. And for good reason. I am going to nobly defend her honor.

Gary: It would seem that there are some insensitive haters out there that think it’s funny to make fun of the mother of all swim mothers. The #1 Mom.

I found this sickening video on YouTube that was posted in August of 2008. It’s absolute filth. Children, do not watch this video. Warning: Explicit Language. (note: ssn executive edit)

David:  Can we move on and pretend like I didn’t let you put that on this site?

Gary: I know, right? It’s as tasteless as the organic pizza they serve at the natural foods market down the street.

David: Seriously though, she’s pretty engaging. Check out this interview with the real Debbie Phelps.

Gary: Perfectly charming, I agree. Debbie sometimes talks about herself in the third person. A lot of very famous people do. Interestingly, the interview makes me think of “DP Moments.”  Those are the heartfelt moments that bring tears to the eyes.

I haven’t experienced a DP Moment with you, David. Your girlfriend broke up with you recently though. Do you want to get together and talk about it? Together, for a DP Moment?

Maybe together we could win her back?

David: Through these very lonely times I sometimes think WWDPD. What Would Debbie Phelps Do?

Gary (nodding and whispering): What Would Debbie Phelps Do…

(pregnant pause to look up into the sky)

David (five minutes later): This is always the part of the column where you lose me.

Gary: Bless it all, Cromwell! I have to defend DP honor the way Senor Alonso Quixana defended the honor of Dolcinea del Toboso! I shall charge him through with mine sword! If Michael Phelps is the crown prince of swimming then Debbie Phelps is Reigning Queen! The Queen Bee, DP! The PRINCIPAL of United States Swimming! LONG LIVE THE QUEEN!!!

David: Put down the pitchfork. Climb down from your recliner and breathe.

Gary (chest heaving): I… (pregnant pause to look down towards the ground)

David (five minutes later): …Anyway, Gary, when you come over to play on my Slip ‘n Slide we can pause for more contemplation. But, for now, we have important things to discuss. That interview with Ms. Phelps made me think about something important come Olympic-time: media training. Tell me, Gary, as someone that still can’t speak good: is media training worth the investment?

Gary: I got my mother media training for Christmas one year. She loved it! But she just didn’t have the natural talent that DP has. I wonder who paid for Debbie’s media training? It’s clear that she’s worked with some of the best.

And I hate to say it because she seems really great, but Ryan Lochte’s mom? She’s good- don’t get me wrong. All I’m saying is that she could benefit from some public relations makeover work and a new stylist. It’s an Olympic year and Ileana’s going to have to turn up the charm all the way to eleven if she wants to dethrone the DP Queen.

David: You know, Gary, not everything is a competition. If it were, you and I would be losing everytime we write this thing.

Gary: The Olympics IS a competition and DP is tough to beat! Matt Lauer intimately addresses her as “D.P.”. Do you have any idea how many people Matt Lauer addresses solely by initials? Only time will tell who will win this competition but it’s shaping up to be one for the ages! When Bud Greenspan, if he’s still alive, goes to make the Sixteen Days of Glory highlight reel for London in the year of our Lord, 2012, the Phelps / Lochte rivalry could prove to be THE center ring for the London submission of that meaningful documentary series.

Gary: And he was the greatest. The greatest. Woody Allen is pretty good. Pretty darn good. I’m picking Woody for the gold this year with Bud out of the way.

David: This is stupid. The real competition is who will cry hardest on the stands. I love that moment, and it is also the key to millions of dollars and a free box of tissues from Kleenex.

Gary: Are you having a DP Moment too?