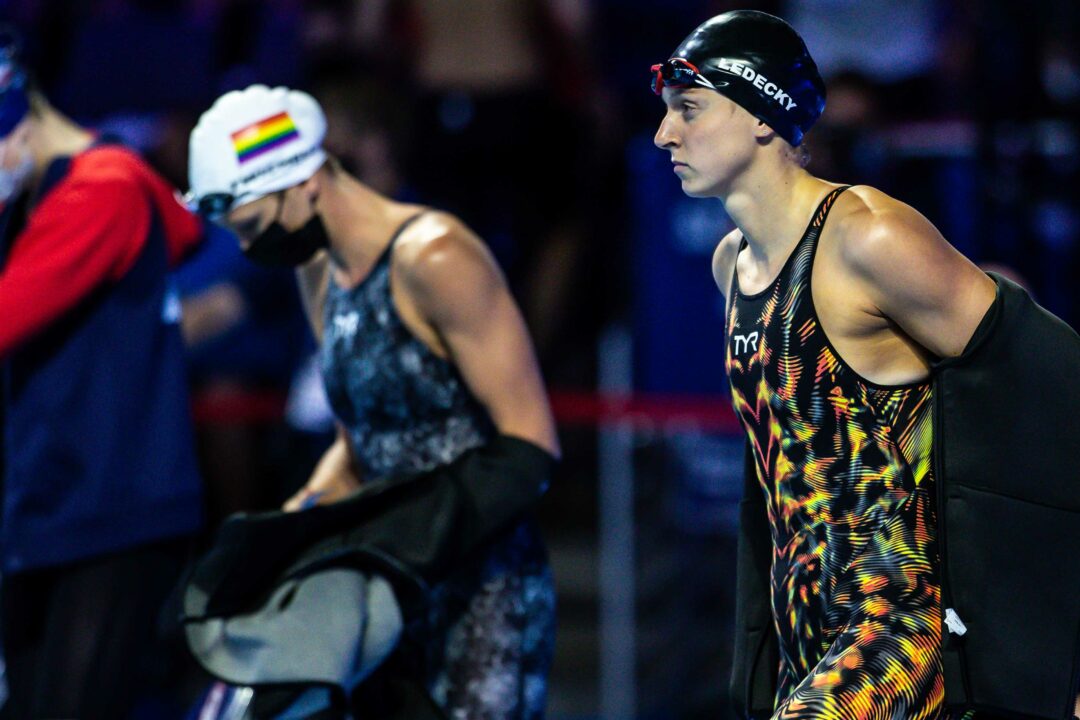 Katie Ledecky and Leah Smith will open the 2021 US Open on Wednesday night in the women's 800 freestyle. Archive photo via Jack Spitser/Spitser Photography

A diverse field will compete at the 2021 US Open this week in Greensboro, with a healthy mix of professionals, collegiate athletes, club swimmers, and a sprinkle of international representation.

Here are four races that you should pay special attention to over the next four days:

The lead here is that Wednesday’s women’s 800 free will mark Katie Ledecky‘s first long course race since joining Anthony Nesty at the University of Florida two months ago. (Ledecky posted SCY times of 1:42.80 and 4:30.55 in the 200 and 500 free, respectively, at Florida’s dual with Georgia at the end of October.)

Whatever form Ledecky shows up on likely won’t mean much in the grand scheme of things—she hasn’t been in Gainesville long enough to know the impact the change will have on her, and it’s unlikely she’s had any semblance of rest coming into the meet.

But still, it will be interesting to see what she’s capable of, if there are any subtle differences in technique or splitting, and where her time stacks up compared to her in-season swims from the past.

Another swimmer to watch in the race will be Leah Smith, who, like Ledecky, made a coaching move after the summer (one in which Smith failed to qualify for the U.S. Olympic team), heading to the University of Texas to train under Carol Capitani and Mitch Dalton with the Longhorn women.

Similar to Ledecky, this will give us a glimpse into where Smith is at in her training so far in Austin.

The race will also feature 13-year-old stud Kayla Han, who is seeded 12th in a time of 8:50.58. Han, who was the youngest swimmer to qualify for the U.S. Olympic Trials in the summer, is entered in six different events for the meet, including the 400 IM, the race in which she qualified to swim in Omaha five months ago.

The men’s 100 freestyle features a strong field that includes former University of Texas star Tate Jackson, who returns to competition after being handed a one-month suspension from USADA after testing positive for THC, the main psychoactive ingredient in marijuana.

Jackson recently revealed on Instagram that he took a five-month break out of the water, and this meet marks his first competition since March. Now training at Nitro Swimming, Jackson will be able to measure himself against a bunch of collegiate swimmers in the midst of their seasons, along with a few veterans.

Serbian native and former Louisville swimmer Andrej Barna comes in as the top seed, having finished ninth in the event at the Tokyo Olympic Games, and he’s followed by NCAA swimmers Ruslan Gaziev, Adam Chaney, Eric Friese, Nikola Acin, Sem Andreis and many more, who were competing at their collegiate invites two weeks ago.

Maxime Rooney and Justin Ress are also among the top-six seeds, but are expected to be racing in Eindhoven in the ISL Final instead.

32-year-old Bruno Fratus is also in the event as the 13th seed. The 50 specialist last swam the long course 100 free in April at the Mission Viejo Pro Swim in 50.17, but could make things interesting with his front-end speed if he can get through to the ‘A’ final.

The women’s 100 back is stacked with talent, led by former world record holder and 2020 Olympic bronze medalist Regan Smith, who is coming off a strong performance at the NC State Invitational with the Stanford Cardinal.

Smith clocked 49.97 in the SCY 100 back at that meet, topping reigning NCAA champion Katharine Berkoff, who comes in as the #2 seed in the event.

Then there’s another former world record holder, Kathleen Baker, and some other top college swimmers, including Virginia’s Alex Walsh.

Walsh was on fire at the Tennessee Invitational, and though this race isn’t one of her primary focuses, she’s still capable of dropping something very competitive.

As for Baker, she was racing in the ISL playoffs in November, but missed the LA Current’s last match before the final, so she could be in Greensboro.

The men’s 400 free is full of some of the top swimmers in the 500 free so far in the collegiate season.

Bobby Finke, the reigning Olympic champion in the men’s 800 and 1500 free, lurks down as the eighth seed, and will go head-to-head with a few of his University of Florida teammates that topped him at the Georgia Tech Invite a few weeks ago.

NC State’s Ross Dant is another big NCAA name in the event, having been 4:16.28 in the 500 during the first week of invites, and Malaysia’s Hoe Yean Khiew comes in looking to shake things up with a best time of 3:50.77.

This meet is a snoozer if that’s all you could come up with. I’m watching the results in Minnesota.

Bobby Finke’s entry time in the 400 is three seconds slower than his average time per 400 in his Olympic 800 free.

I’ll be keeping an eye on 14 year old Thomas Heilman. This isn’t a make or break meet for him by any means, but it’s always fun to see a kid that age holding his own against guys so much older.