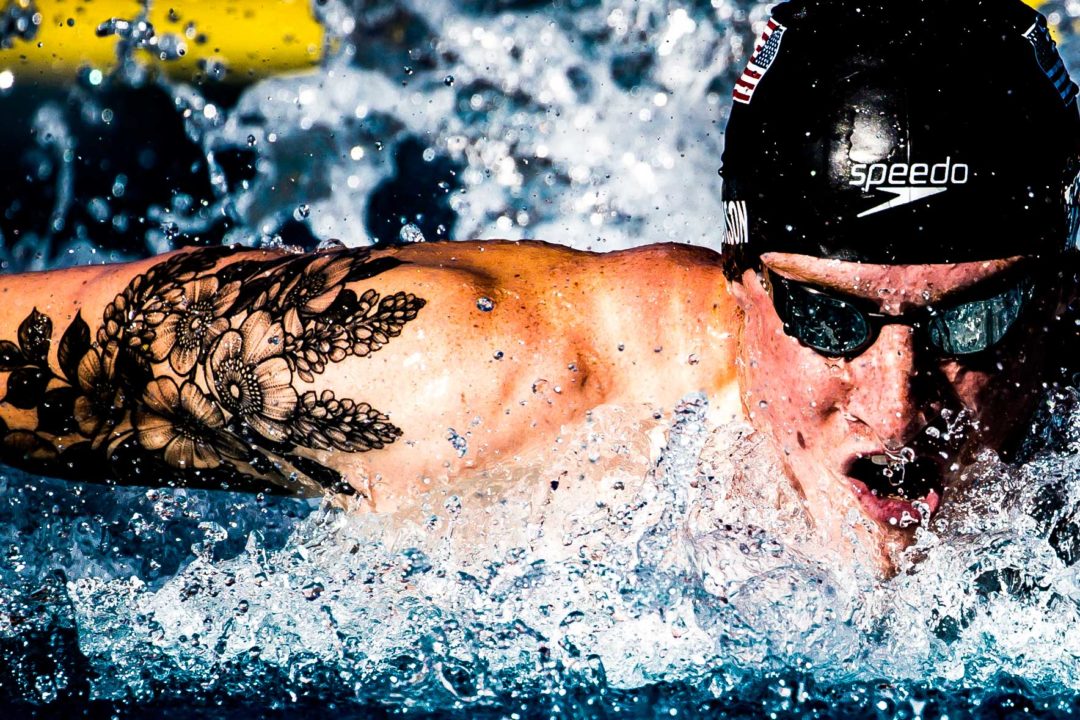 Jackson is slated to race the 100 free this week at the US Open, marking his first competition since the early 2021 Pro Swim Series. Stock photo via Jack Spitser/Spitser Photography

Former Texas Longhorn and US National Team member Tate Jackson posted an update on his Instagram account today as he prepares for the US Open this week. In the lengthy post, Jackson reveals that he took time out of the water starting in May, in order to “focus on [my] mental health and happiness.”

On April 29th of this year, Jackson was handed a 1-month suspension from USADA for a doping violation. Jackson was found positive for THC, the main psychoactive ingredient in marijuana, at a Pro Swim Series meet in San Antonio. The break Jackson took following the ban resulted in his sitting out from the US Olympic Trials this past summer, where his personal best would have placed 3rd in finals of the men’s 100 free.

In the IG post, Jackson says he took 5 months of “doing whatever made me happy at the time, and therapy,” before getting back in the pool approximately 2 months ago. As part of his update, the 24-year-old revealed he’s been training at Nitro Swimming under Patrick McCloskey since returning to the water.

Jackson is slated to race the 100 free this week at the US Open, marking his first competition since the early 2021 Pro Swim Series. With approximately 2 months of training “just getting back into it,” this weekend will provide Jackson an opportunity to see where he’s at in his top event as we head into 2022.

Good for Tate, take as much time as you need.

SwimSwam, any chance you could reach out to Devon Nowicki to see what is up with him?

Good luck Tate! We’re all rooting for you!

That dog is freaking cute as heck.

We ran a clinic with him a little before Covid hit. Kids had a blast and posted some strong times the following weekend. He’s personable and relatable…. And insanely fast.

Internationally I doubt THC will ever be accepted, but really wish it would be, would help with so many peoples anxiety especially at the elite level. Being in your system and actually being high are very different things, wish him the best and a great return. Hook’Em

I think you’d have a lot more luck getting it cleared from banned substances lists if you could establish a test for “being high” versus “was high 3 days ago.”

In some sports (skiing, cycling) there are legitimate, authentic, and completely valid safety concerns about having a racer who is high in competition.

I’d love to hear the WADA/USADA take on how big of a hudrdle the “international acceptance of marijuana” is to its being cleared. I don’t think we’d really get honesty, though.

Is there anyone out there who would race “high”, especially skiing, unless their goal was to go slow and just enjoy?

I’ve heard some rumors of someone a decade ago winning conference and Ncaa’s high. I would love to see if theres any truth to it but I doubt anyone would admit to it. Your turn to do some digging swimswam!

Obviously not a skater…

You could in theory race drunk as well, but no one is going to do it. It’s also easy for governing bodies to say you can’t have the substance physically with you at a competition.

Good for you Tate! Great to see people recognizing when it’s time to take a break and focus on their own happiness.

Blessings Tate, on the comeback!