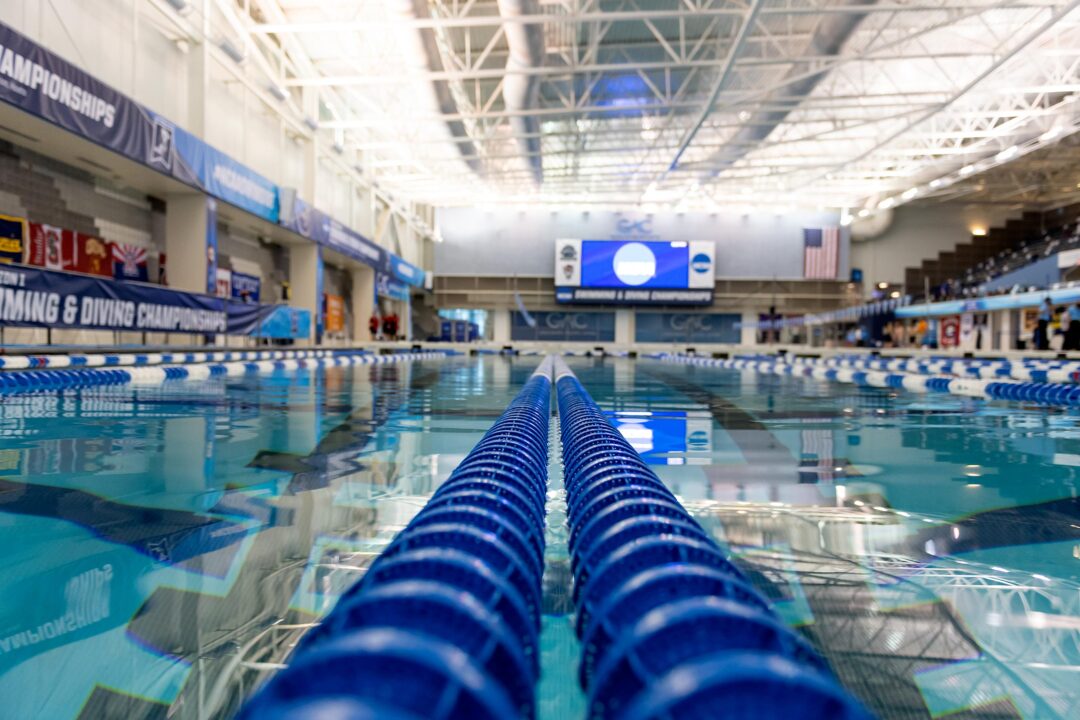 The 200 medley relay will now be contested on Wednesday night, along with the 800 free relay, at the 2022 NCAA Championships. Current photo via NCAA

Relays at the Division I NCAA Championships will remain timed finals in 2022, and the 200 medley relay has been moved up to the opening night of competition.

The news was announced by the CSCAA in its weekly newsletter on Monday, noting the changes are specifically related to Division I.

Timed final relays came into effect last season in light of the pandemic in an effort to mitigate the number of swimmers crowded behind the blocks for each race. 2021 NCAA relays also featured one empty lane between each team—it hasn’t been announced whether or not that will be back this season.

In a poll after the championships, 48.9 percent of SwimSwam readers said they actually preferred timed final relays (compared to 40 percent saying they were worse and 10 percent saying it was the same).

As for the schedule change, the 200 medley relay moves to Wednesday night, along with the 800 free relay (like it is at most conference championship meets), which clears up the schedule a little bit during the rest of the meet and allows there to be just one relay per day for the remaining three days.

My biggest issue with this is that we might not see all the fastest teams in the same heat. Some teams really drop off of conference times and others are much faster. I want to see the 8 best teams in the final heat.

It’ll be interesting to see how much this benefits some of the teams that aren’t as deep and couldn’t afford to swap swimmers from prelims to finals. NC State women’s medleys come to mind as a place where it could really help. Texas and Cal men might be less happy with the change.

DI should just go with the DII and DIII combined meet with a full four days of racing…including the 1000 free for the distance guys and girls. It would be electrifying!!!

I wish Division I adopted the SEC format where the meet is over 5 days. Makes it a lot easier for people who specialize in 100 fly and 100 back especially to have them on separate days.

But yeah having relays be prelim and final is garbage and I’m glad they’re finally addressing that.

The SEC did this to accommodate a combined Men’s and Women’s meet adding two new schools (A&M and Missouri). The only way this happens at the NCAA meet is if it also becomes a combined meet and while some would support that there are many who would not.

Under this format he would have:
Wednesday- 1
Thursday- 3
Friday- 3
Saturday- 3

His 100 free record would be 37.99 and I think it’s only right that we change the record books to reflect this.

i think you are jumping the gun (or should I say swim start) on this one. Dropping a second in a 100 is like going from eating only up to a quarter of a cake after dinner to half of it.

Could the Alabama men and women both earn an NCAA relay title on opening night?

The Bama men have won it twice in recent history. And both Matt Menke and Rhyan White could be out in front early on, giving clean water to breaststrokers Avery Wiseman and Derek Maas 👍

It’s certainly within the realm of reason. The men’s 200 medley is wide open this season. Coming into the year, I would’ve said the women were one leg short, but Avery Wiseman’s results so far indicate differently. NC State and Virginia 200 medley relays are incredible on the women’s side, though, so that will be the tougher challenge.

It’s funny, but the 200 medley relay has recently been won by a team other than the main team contenders with the exception of 2017.

Good move! The quality of relays will be much better now!