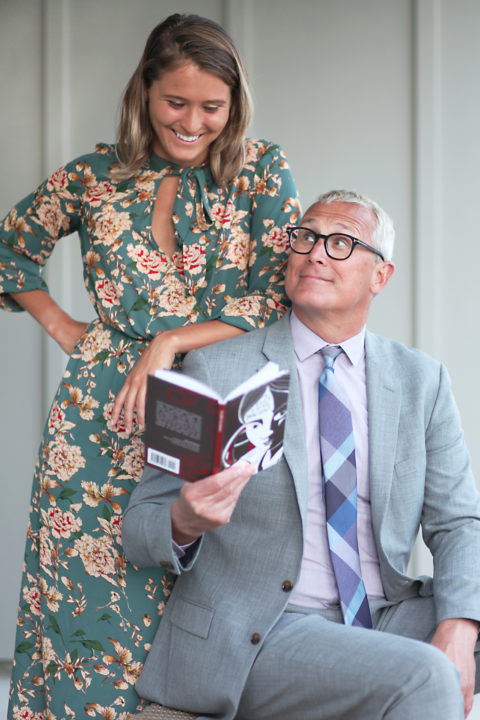 Olympic Trials hopeful Zoe Thatcher, a former swimmer at Auburn University, has published a book with her father, Geoff Thatcher. Daughter Thatcher provided the illustrations for her father’s writing, with the project brought from idea to production in just 30 days.

Entitled ‘The CEO’s Time Machine’, the book tells the story of a CEO who is turning over his company to a young protege. And, as the title suggests, the secret to this CEO’s success has been a time machine that he keeps in a secret R&D lab.

Zoe told SwimSwam of the project’s timing, “We’ve had people tell us that publishing a book during a pandemic is a stupid time to do a book. However, when you think about it, there’s no better time than now to pick up a project you’ve been thinking about for a long time but never had time to act upon.”

Creative juices flow through the Thatchers, however, as the family owns a small theme park, museum, and brand experience design firm called Creative Principals. Zoe started doing freelance work for the company during college with her first big job being that of designing costumes for the grand opening of Warner Bros. World Abu Dhabi. But that was just the beginning of the swimmer’s journey with her dad.

“When COVID-19 hit, I turned to Zoe and said, “Let’s do something crazy,” said Geoff. “And so we published a book.

“This idea wasn’t new to us. We had talked about publishing this story since October when she posted an amazing illustration on Oct. 29th during the Instagram challenge called “Inktober.” I originally wrote this short story back in  2016, but we just never had time to do anything with it. In fact, In November, December and January, Zoe and I talked about the book, but the problem with trying to do projects in your spare time is that you never have any spare time,” explained Geoff.

Amidst the pandemic, Zoe fired off 43 illustrations 3 weeks, a task her father describes as ‘Herculean.’

Geoff says, “Zoe’s illustrations are, I think, the best part of the book. All of the reviews on Amazon are praising her illustrations as “stunning,” “mesmerizing,” “fantastic” and just downright cool!”

Zoe graduated from Auburn in 2018, was a 2016 Olympic Trials qualifier and is still training in the hopes of making the United States’ Olympic team for the Tokyo edition postponed to 2021. She trains in Savannah, Georgia at the Savannah Swim Team along with Joe Witt, Carlton Bruner and Bill Pilczuk.

“Here in Savannah, I work full time as a designer and illustrator while also still putting an extra 10 hours a week designing costumes for the largest dancewear company in St. Louis I worked for right after graduation,” says Zoe.

“The biggest challenge of post-collegiate swimming is balancing work, mortgage and life. You just can’t compare it to how you trained in college.

“I love swimming, but it’s not my one and only purpose in life.”

The CEO’s Time Machine is for sale on Amazon, Barnes & Noble and other online retailers. You can either buy a hardcopy or ebook. To learn more, just go to www.ceotimemachine.com.

Congratulations! I believe the entire family has talent and creativity. Didn’t Mia announce her commitment to SCAD through an illustration? https://swimswam.com/mia-thatcher-sends-verbal-to-scad-will-join-her-brother-joel-next-fall/

She did. One of my favorite announcements ever.

What is their theme park and museum called? I’m just curious!

You can check us out at creativeprincipals.com !

I’ll be disappointed if it is not the Creationist Noah’s Ark Museum & Th e me Poark .