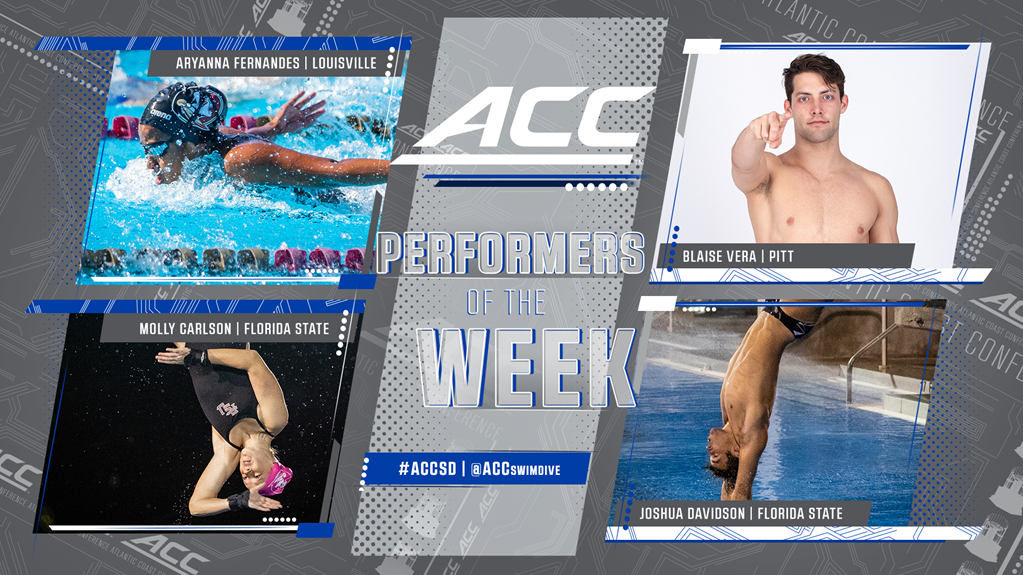 Pitt’s Blaise Vera along with Florida State’s Joshua Davidson, Aryanna Fernandes and Molly Carlson were honored as ACC swimmers and divers of the week. Current photo via Atlantic Coast Conference

Vera won both of his races to help Pitt defeat Michigan State over the weekend. The junior from Clinton, Mississippi, took first in both the 50 freestyle and the 100 freestyle.

A junior from Tomball, Texas, Davidson won both of his diving events to propel the Seminoles to a 193-107 win over Minnesota. He won the 1-meter competition with a score of 327.37 and placed first in the 3-meter event with a score of 333.75.

Fernandes had a stellar performance to help Florida State topple No. 18 Minnesota. The sophomore from Ajax, Ontario, won both the 100 and 200 butterfly, and was also a member of the winning squads for the 200 freestyle relay and the 200 medley relay.

Hailing from Toronto, Ontario, Carlson had a strong performance on both boards in the Seminoles’ win over Minnesota. The Florida State diver won the 3-meter competition, scoring a 326.10, and placed second on the 1-meter with a score of 278.40.

Blaise Vera needs to stop eating 12 eggs and 2lbs of bacon. He would be so much faster!