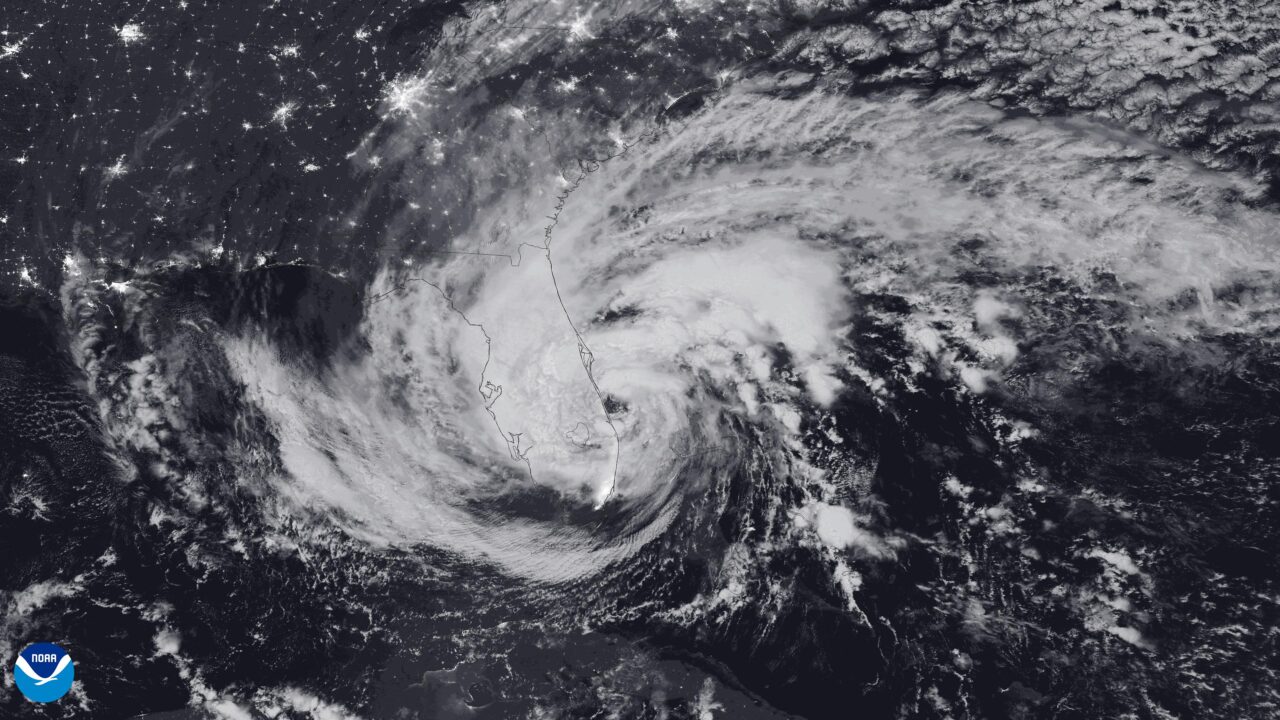 Hurricane Nicole made landfall about 30 miles north of where the Florida 1A State Championship meet was scheduled to begin on Thursday in Stuart, Florida. Current photo via NOAA

The Florida High School Athletic Association (FHSAA) has postponed two of its championship meets scheduled for this week after Hurricane/Tropical Storm Nicole passed through the state this week. The FHSAA said the decision was made “in conjunction with the Treasure Coast Sports Commission, Sailfish Splash Park, and Martin County.”

The 1A and 2A State Championship meets, for the state’s smallest high schools, mostly private and charter schools were originally scheduled for Friday and Saturday, respectively.

Both meets are scheduled for the Sailfish Splash Waterpark and Aquatics center in Stuart in the Southeastern part of the state.

Nicole made landfall early Thursday as a Category 1 hurricane in Vero Beach, about 30 miles north of Stuart. Shortly after landfall, it weakened to a tropical storm, but continued to cause damage throughout the state that is still recovering from Category 4 Hurricane Ian six weeks ago. The venue is outdoors.

Two deaths have been reported in the state so far as a result of Nicole. Two people in Orange County were electrocuted by a downed power line.

Gulliver Prep and Bishop Kenney are the defending 2A Champions in girls’ and boys’ swimming, respectively.

The 3A and 4A Championships, for the state’s biggest high schools, were held in Stuart last week.

Other Florida High School championship events have been impacted as well. Some of the state’s golf championships have been postponed, while championship series competition in football and volleyball are also being impacted, depending on the location.

Darn it Nicole, now you ruined my taper!

I was there last Saturday to watch one of my kids swim. It has to be one of the worst venues for parents who want to take pics of their kids because the stands are set back, and the coaches and refs are right on the side of the pool, blocking parents’ views.

On the other hand, the met was very well run and I think the swimmers were happy with the meet.

How much would it cost to break the contract and move it to Orlando or to the new pool in Ocala?

2022 is the last meet under the “current contract” in Stuart.

The state meets need to be held indoors in a controlled environment. Florida’s weather is so unpredictable from one day to the next and you have four different state meets on four different days. The job of the FHSAA should be to create the best environment for the best performance’s not going to the lowest bidder which is what has happened now for years. You have many of these kids vying for college spots and in some cases athletic scholarship money.

Doesn’t the unpredictability of weather make it the most FLORIDA event? Are you a FLORIDA champion without having to deal with this kind of thing?

But on a more serious note: I don’t think moving it indoors comes close to solving the problem. If a hurricane rips through the state in championship week, you’re going to have to postpone because of travel issues, recovery issues, etc. And hurricanes can certainly damage indoor venues. Postponing in the indoor venue becomes VERY expensive, and at times impossible,… Read more »

OR they could move HS swimming back to where it belongs, in the winter

Seriously, if anyone is vying for a college spot or athletic scholarship money, it’s not going to be based on high school swimming. Too many states with different rules that don’t make it an even playing field. Colleges want to see average times and best times under various conditions, etc.

Rain forecast this weekend. Third year in a row it’ll be cold and wet for the 1A/2A Championships. Meet needs to move to Rosen or Ocala.