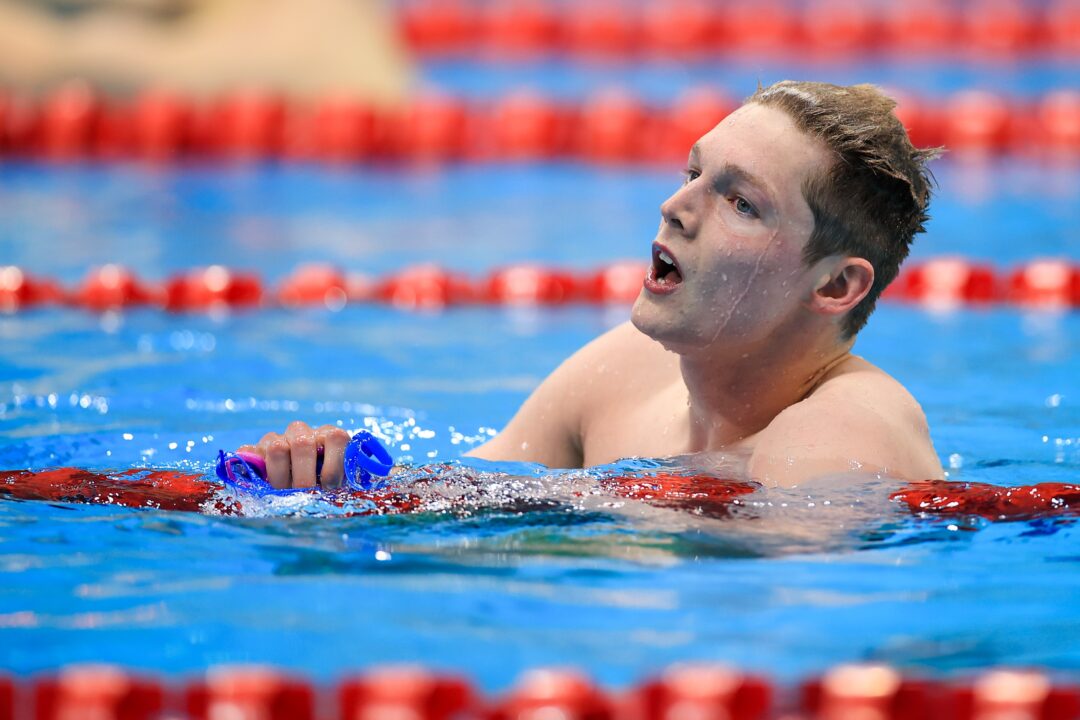 Entering the final day of competition of the 2021 British Swimming Selection Trials, 23 Brits have cleared the nation’s stiff Olympic qualification standards. This morning at the London Aquatic Centre, the prelims of the women’s 100 breast, men’s 200 back, women’s 50 free, and men’s 200 free took place. The fastest-seeded heats of the men’s and women’s 1500 free will start off tonight’s finals session at 7pm British time.

Along with Scott, Richards (100 free), Guy (100/200 fly), J. Litchfield (200 IM), and M. Litchfield (400 IM) have swam under Britain’s Olympic qualifying standards while Dean and Jarvis have just cleared the 200 free standards and Kurle is a mere two-tenths off the cut. Unfortunately, not every swimmer will be selected to the 2021 Olympic team tonight, so placing will be crucial in tonight’s final.

Kicking off the morning was the women’s 100 breast, where Loughborough teammates Sarah Vasey (1:07.03) and Molly Renshaw (1:07.26) were the only two swimmers to break 1:08 in prelims. Both Vasey and Renshaw will need to swim under 1:06.79 to be considered for the 100 breast on the Tokyo Olympic team.

After nabbing the Olympic qualifying cut in the 100 free, Arkansas alum Anna Hopkin of Loughborough took the women’s 50 free prelims top time at 24.81, just two-tenths off the 24.60 cut. Rounding out the top three times of the morning were Brompton’s Isabella Hindley (25.26) and Edinburgh’s Lucy Hope (25.46).

The standards internationally seem really random. In men’s 200 free the british standard is slower than the german standard although GB is much better in this event, on the other hand their standard in women’s 400 free is clearly faster than the german standard, although they are clearly worse in this event. I also find it interesting that apparently british universities have recruited international swimmers (Hansson, Auböck, Vazaios, Wattel) recently to strengthen their training groups.

I’m just realizing how young British swimming is. Looking at the DOB for each swimmer that swam the women’s 50m freestyle, I realized I’m now older than every person that was entered into the event (earliest DOB is 1996). Don’t think I’ve ever seen that before at an Olympic trials meet.

7
0
Reply
Troll in the Dungeon
Reply to  Chad

I feel the same. Only names like Castelli, McNally, Jarvis are older than me now, and I’m effectively the same age as them compared to the young guys coming through.

Same – I’m a 1995 baby and would say I feel pretty young in most areas of life but certainly not looking at the start lists for this week!

Can’t wait for this 200 free! I think Guy and Dean are gonna go for it early, hold on until 150 and then Scott and Richards will overtake to take the individuals.

British Championship team as deep as it gets in the 200 free… if Sam Dailley hadn’t been out this season with coronavirus, they’d have another sub 1:48 leg easily.

I’m going to assume you’re his family because a 1:55 doesn’t suggest in anyway he would be able to keep up with anywhere near those times. Your claim would be that someone could “easily” drop 8 seconds of their pb between the ages of 17/18 to 19/20.

I’m going to assume you know absolutely nothing about swimming. Obviously you’ve never heard of an improvement curve. Maybe go back to soccer Jess.

What do we think the 4×200 team will be? Can any other nation beat the GB team?
I think it’ll be Scott, Guy, Dean, Richards

I assume they’ll take the top 6? And then rest whoever swims individual in relay heats? Or Richards and Scott because 100m freestyle heats same day as relay heats? Either way I am PERCHED and READY

19
0
Reply
Troll in the Dungeon
Reply to  Dee

With Guy in the race there is at least someone who is going to “go out for it.”

16
0
Reply
Chad
Reply to  Troll in the Dungeon

Part of me hopes the piano in the 200 fly taught him a lesson. Part of me also wants to see a race with multiple different racing strategies.

17
0
Reply
Dee
Reply to  Troll in the Dungeon

They definitely got caught watching each other, but it was while going sub 1.45.2 for like 3 swimmers