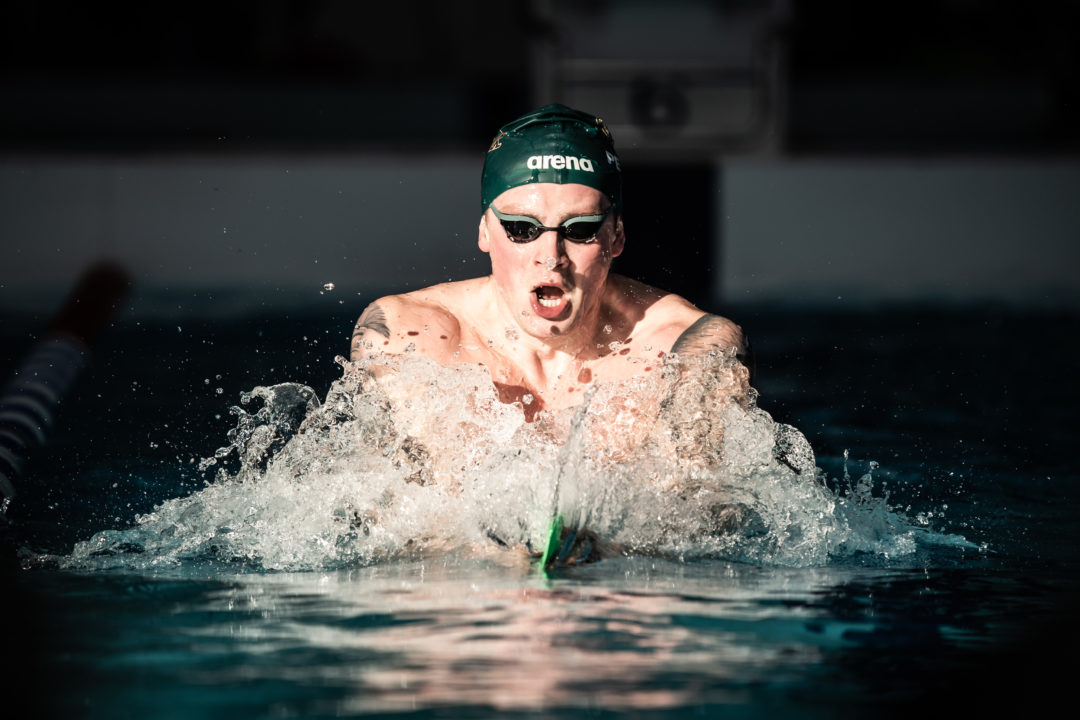 After his recent performance at British Trials, Peaty now owns six of the 10 fastest back-halfs in history in the men's 100 breaststroke. Archive photo via Mike Lewis/Ola Vista Photography

During last week’s British Swimming Selection Trials, Adam Peaty had his job done on the first day. He set an impressive 57.70 in the heats, and clocked an even more impressive time 57.39 in the final, the fifth and 10th-fastest performances of all-time. With these two swims, he has now swum the 20-fastest times on record in the event, 15 of those being sub-58 swims.

And perhaps equally impressive is the fact that Peaty managed again to register sub-31 back-half splits: 30.83 in the heats, 30.70 during the final. Instagram’s Swimming Stats page has published the fastest back-half splits in history of the men’s 100 breaststroke, seen below. Peaty’s 30.70 from last week checks in as the 10th-fastest in history, and he now owns six of the 10 fastest ever.

It’s not easy an easy thing coming home sub-31 – few swimmers have done it. Usually, swimmers who come home the fastest are those who are great 200 breast swimmers, like Kosuke Kitajima, Daniel Gyurta, and, more recently, Anton Chupkov and Arno Kamminga. They don’t have as much speed on the front half, but they are able to pull away at the end with very strong closing meters.

Peaty, however, is an entirely different beast. He manages to be the fastest man in the first 50 meters AND on the second 50. In fact, he is the only active swimmer who has managed to have a sub-27 opening 50 and a sub-31 back-half.

When Peaty broke the 100 breast world record at the 2019 World Championships, his time in the first 50 meters was a very strong 26.63 – a time that only Peaty himself went faster than in the 50 breaststroke event. After such an impressive opening split, most swimmers would die on the second half, but not Peaty. In fact, he registered the fastest back-half ever: 30.25.

It’s interesting noting that, in the last three times he broke the world record, he registered the three fastest back-half splits ever.

And it’s also interesting seeing how his stroke and efficiency is changing over the years. He has been known for his insanely high stroke-count. He takes more strokes than anyone in the pool without losing efficiency and without wearing out.

But the stroke count is not as high as it used to be a few years ago, at least during the second 50.

Undoubtedly he is improving his efficiency per stroke in the last 50 meters, something every swimmer aims to achieve. And he continues to improve his times. Will we see him complete the second half of the 100 breast in an unbelievable sub-30-second in Tokyo? We’ll have to wait and see. The show must go on.

Would be really interesting to see the same list for the 100 free.

As far as I’m aware, Phelps’ 24.20 to close his 47.51 leading off the legendary 2008 relay is the quickest. Faster than anything Chalmers did, faster than Lezak/Scott closed in their monster splits too.

I think we’ll get a 23. backhalf in the next Olympic cycle – They way these kids are splitting the race now is crazy. When I think of the top young sprint prospects; Minakov, Kolesnikov, Richards, Whittle, Southam, Popovici etc… They all backhalf it really strongly. I know it’s harder for them to get out fast at their age, but have we ever had a generation of teens who are coming come way under 25s?

Yeah and Sullivan beat him to the wall

Best swimming page on insta by a mile

I love Coleman so much, it’s rare to see someone with that much passion and drive for their job. It’s clear he’s doing what he loves. This comment has a lot of Facebook mom energy but just want to let Coleman know he’s appreciated

“In fact, he is the only active swimmer who has managed to have a sub-27 opening 50 and a sub-31 back-half.” Given he’s the only swimmer to have ever gone sub-58, this is perhaps not surprising 😉

Interesting analysis regarding the number of strokes. How does it compare to his competitors? Or to someone like King or Pilato on the women’s side (perhaps the closest to Peaty stroke-wise)? He also looks to have improved his start and turn, which would naturally translate into fewer strokes over the rest of the length…

As for Tokyo… If we look at 2016-17 for comparison, he dropped 1 second or more from trials to Olympics/Worlds. Obviously it doesn’t always work that way, but his… Read more »

I hope so. I love watching his races.

This is interesting, but I don’t know if I’d consider someone with a 4 second differential between their first and second 50 a “good closer” exactly.

I don’t think they are talking about the difference between the 50’s what makes him a “good closer” is that He can beat guys like Chupkov by 2 seconds on the front end and be faster on the back end after.

i disagree.
by this logic someone who would split their 100 breast in 34.0 first 50 into a 33.5 second 50 would be a better closer than chupkov.
which is not true ofc

Except Peaty is still faster on the second 50… which is literally finishing his race faster and that’s all that matters. Splitting is important sure, but not when your splits are slower than the guy winning

I can amazingly negative split my 100 breast, I go out in 55 and back in 52/51. Therefore I am also a better closer than Peaty…

Why is he so fast? Dean Farris gave birth to him obviously!

Wanna beat the best gotta do what none of rest are willing to do.

Because “work works”, specially under Coach Mel Marshal.
I did a single workout with them back in 2019 and it was enough to show me why he is so dominant, mindblowing!