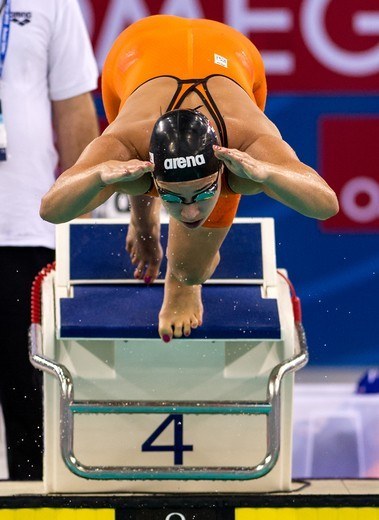 Above, Ranomi Kromowidjojo swims at the Doha stop of the 2013 World Cup, which will lead off this year's series. Archive photo via G.Scala/Deepbluemedia.eu

FINA has announced the stops for the 2014 World Cup series, and for the second-straight year, they’ve dropped a stop to an old stalwart of the tour:  Berlin, Germany.

While changing stops every few years is nothing new for FINA in this series, since it has received more-and-more attention, we have become more-and-more attached to certain stops. That’s especially so of stops like Berlin, which has the longest streak of hosting in this series (the last 14 years) and the most hosting duties in series history (16 since the tour started in 1988).

What’s more, it has proven a reliable record-breaker: 13 World Records have been broken at World Cup stops in Berlin, which is more than any other single pool aside from the Foro Italico in Rome. Berlin will host the 2014 European Long Course Championships, the biggest meet of 2014 for most of the continent, which is the probable explanation for it not hosting a World Cup stop.

This follows a year where FINA dropped Stockholm, which had been another long-time host.

While some of the final details (including a few dates, and whether or not Beijing will actually host) are left up in the air by asterisks, below is the schedule that FINA has released.

The meet will see a pair of stops in the middle east in Doha and Dubai, followed by a hop far to the east to Hong Kong, then a return to ‘the continent’ for meets in the Netherlands and Russia, and then a jog back to the east for Beijing, Tokyo, and Singapore.

This new schedule lacks the cohesion and pod-system that worked so well last year when the series was coming off of the World Championships in Europe. Now, suddenly, the travel becomes more daunting and more expensive with more trips back-and-forth between different continents, and it seems less likely that there will be good participation in Hong Kong.

The main reason why we got the axe is that we’re hosting LEN Euros this summer, and apparently, we lack the money to get a World Cup stage underway as well then. Which sucks because a) it is a fun meet, b) the swimmers are very accessable, and c) the pool here in Berlin is one of the fastest on the tour.

I know, Doha probably has more money, but I find it funny that this – hosting LEN Euros – is the actual reason why we’re not on the tour this year, but Doha is also hosting SC Worlds in December. Money talks …

At least that, LEN Euros, is the reason which is given over here. I… Read more »

This schedule makes me laugh.
😆
And, please, give a world cup to Paris next time.

jarrettbrown – my guess is the USA Swimming prefers not to host. They’ve got their own Grand Prix series, and there’s a HUGE buy-in to host a World Cup.

What amount of money defines “huge” in swimming? Money is all relative in sports.

I could be wrong, but I believe that the prize money from World Cup stops comes from the host city and not from Fina. Thus, hosting a WC meet is mega expensive.