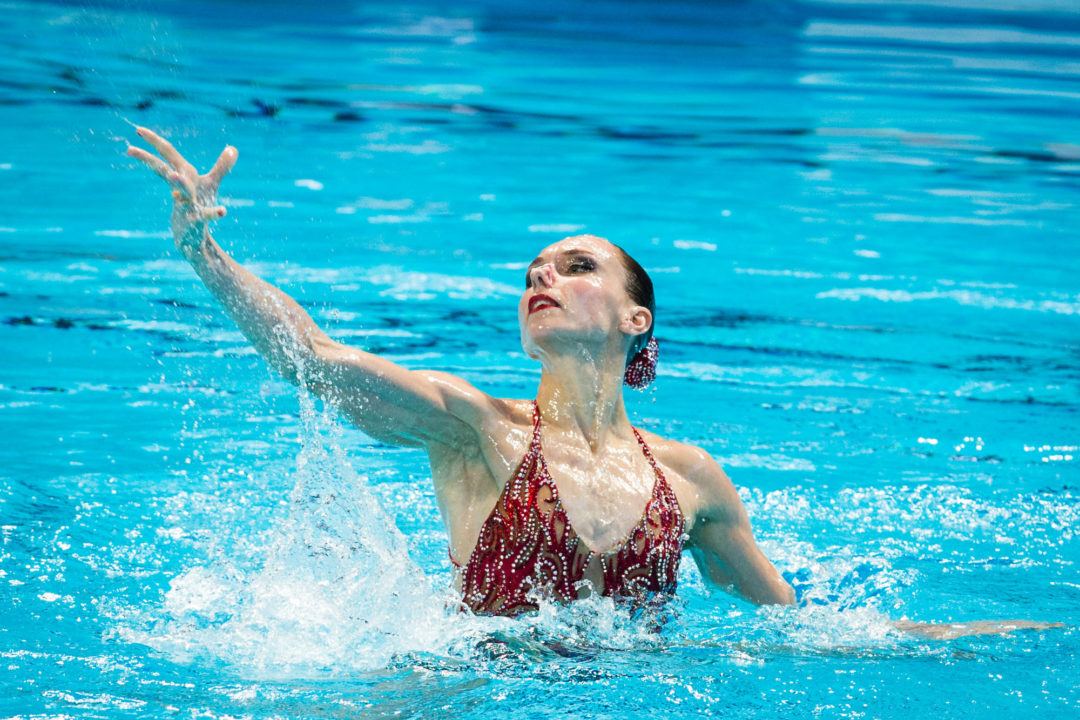 This month is a major one for FINA meetings, with Technical Congresses meeting for various aquatic sport disciplines and the General Congress meeting later on to elect the next federation president. The first two Technical Congresses met today, with synchronized swimming adding a new World Championships event. Archive photo via Tim Binning/TheSwimPictures.com

Synchronized swimming will now feature a “highlight routine” event at the World Championship, per a FINA press release. The event features 10 swimmers per team, with a handful of required elements: four or more acrobatic movements (which include jumps, throws, lifts, stacks and platforms), a “connected or intertwined action” as well as a float.

There were a couple more small technical updates, which you can read in the full press release below.

Diving and high diving also met in Technical Congresses. The most notable changes there came in high diving, where divers will now be allowed to add two reserve dives, which they can substitute into their lineups five minutes before a final round begins. FINA also approved extra point deductions for divers “performing unsafely close to the platform.”

Here’s a quick look at the dates of more upcoming FINA meetings:

The full FINA press release is below:

The first two FINA Technical Congresses – Synchronised Swimming, and Diving & High Diving – took place today in Budapest (HUN), a couple of days before the start of the 17th FINA World Championships in the Magyar capital.

“This is certainly a great opportunity, every four years, to update, improve and modernise our rules, with the contribution of our National Federations and Technical Committees. Their valuable work makes our Sport bigger and more recognised, thus generating more popularity and inspiration in the five continents”, stated the FINA President Dr Julio C. Maglione to the delegates of both Congresses.

The main rule changes approved by the National Federations’ representatives were:

–    Introduction of a new event in the programme of the FINA World Championships: the Highlight Routine (with 10 swimmers). Required elements (to be performed by all athletes) for this routine include a minimum of four acrobatic movements (jumps, throws, lifts, stacks or platforms), a connected or intertwined action, and a float to give a kaleidoscopic effect;
–    Figure routines are replaced by technical routines at FINA World Junior Synchronised Swimming Championships;
–    Free team routines may have a maximum of six acrobatic movements (excluding partner lifts). If this number is exceeded, a two-point penalty shall be deducted from the routine score;
–    Reduction of the Free Combination routine time, from 4m30s to 4m00s;
–    Changes in the judgement of figures, with definitions for small, medium and large deductions;
–    For Solo and Duet technical routines, all elements shall be performed parallel to the sides of the pool where the panel of judges have been placed;
–    Update on the rules concerning the music accompaniments;
–    Adjustments on some synchro movements.

–    Readjustments in the diving number designations;
–    Possibility for each diver to provide two reserve dives, which may be substituted five minutes before the commencement of the final round of dives;
–    New deductions for divers touching or performing unsafely close to the platform;
–    Updated criteria for the establishment of the degree of difficulty for dives with twists.

On July 13, 2017 two more Technical Congresses – Open Water Swimming and Water Polo – will be staged in Budapest. On July 21, Swimming and Masters will update their technical rules, while the FINA General Congress will be held on July 22, 2017.

I am in favor of removing “Synchronized Diving.” This is not a sport. I don’t understand how this became a sport and the nutjobs at IOC tried to remove wrestling.