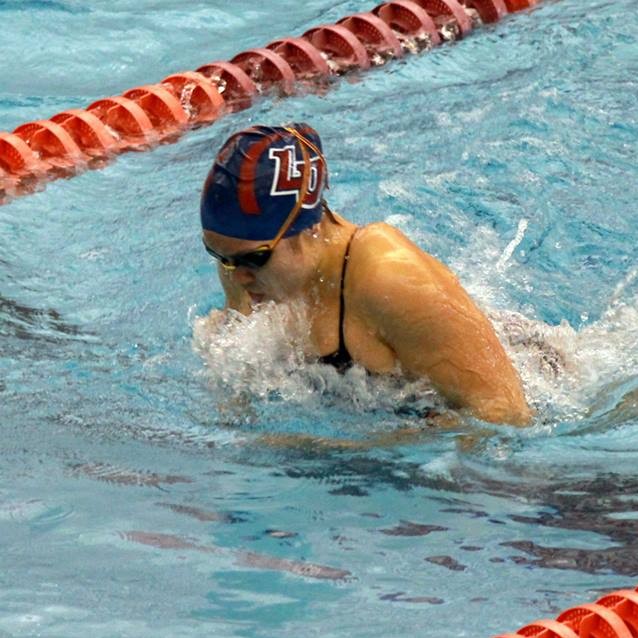 Florida Gulf Coast kicked off its inaugural Triple Distance Classic by clocking wins against Rutgers, Liberty, and Saint Louis. They came on strong at the end, winning the last 3 events to soldify their lead over 2nd place finisher, Liberty. Liberty actually won the most events, 8, followed by 6 events by FGCU, and 5 by Rutgers.

The only swimmer to win all 3 events of the same stroke was Liberty breaststroker, Prudence Rooker, who took all 3 breast events by about a second. Rooker also put up better times as she came down from the 200 to the 50, posting times of 2:22.67/1:05.90/29.41. Rooker was also on the winning 200 medley relay, but the breast and fly splits are missing from that race so we don’t know how fast she went.

FORT MYERS, Fla. – After a chilly evening for the first meet of the year, the FGCU swimming and diving team won the Triple Distance Classic with 395 points on Friday night at the FGCU Aquatics Center.

2017 CCSA runner-up Liberty finished second with 344, St. Louis in 267, and Rutgers closing it out with 245. This is the second time this season the Eagles won a competition against the Scarlet Knights.

“This event is what college swimming is all about,” FGCU head coach Dave Rollinssaid. “The team support from everyone on the deck, from every team, the enjoyment, the spirit, and cheering. Everyone is in heavy training, and while we wish it was a bit warmer, competed very well. My hat goes off to everyone who was on that deck and in those stands this evening. It was an incredible experience, win lose, or draw didn’t matter. We put this meet together to do something different and to have some fun! We are looking forward to next year.”

Sprint freestylers, butterfliers, backstrokers, and breaststrokers competed in a 50, 100, and 200 of their stroke. The distance swimmers competed in a 200, 500, and 1000 freestyle. Individual medley swimmers swam a 100, 200, and 400 IM. There was also a 200 medley relay and 200 freestyle relay offered for each team, which contributed to their overall final score. Points were determined based off of the fastest combined time of an overall event.

The Eagles finished off the night by winning the final relay by .34 seconds. The team of Redding, Burdge, Moynihan, and Eichhorn took the win over Liberty with a time of 1:36.12, adding a total of 40 points to the overall score.

The meet featured a unique scoring system, with athletes swimming three events in each stroke and being scored on their total time. Liberty had two stroke champions, in Alicia Finnigan (butterfly) and Prudence Rooker (breaststroke).

Rooker completed the evening sweep by taking the 50 breaststroke with a 29.41, while teammate Hodges finished as the runner-up in 30.26.

Amy Schools earned a second-place finish in one-meter diving, scoring 187.05 points, while finishing ahead of all of FGCU’s divers.

Liberty finished second in the 200 free relay to close out the meet, as Hoeve, Colleen Donlin, Weiss and Baker totaled 1:36.46.

The Lady Flames will return home to host Marshall and UNC Asheville, next Saturday, Jan. 13 at 11 a.m. at Liberty Natatorium.