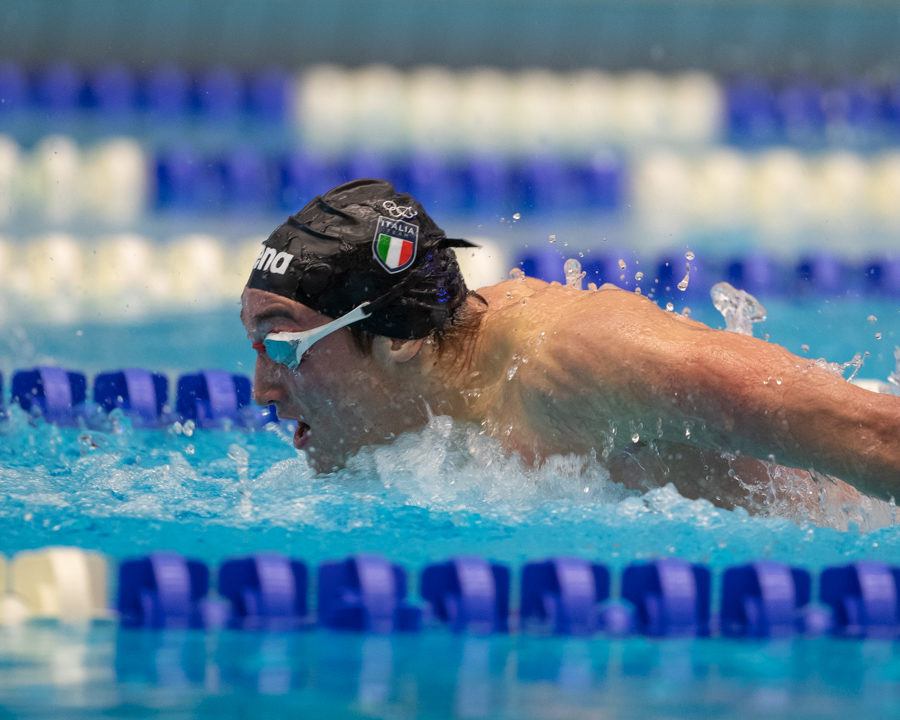 Both Italian young guns Federico Burdisso and Thomas Ceccon were in the pool on the final night of action in Geneva, Switzerland and each came away with his own record to wrap up the competition.

Both Italian young guns Federico Burdisso and Thomas Ceccon were in the pool on the final night of action in Geneva, Switzerland and each came away with his own record to wrap up the competition.

Youth Olympic Games standout Ceccon rocked the winning time of the men’s 18&U 100m backstroke final, crushing a mark of 54.85, That registered as the fastest time of both the junior and senior final, beating Swiss swimmer Roman Milyukov who took the 19&O category’s race in 55.85.

For Ceccon, he beautifully split 27.08/27.77 to clinch the gold. His time overtakes the previous meet record for 18&U held by Simone Sabbioni with the 55.85 he registered back in 2014. For perspective, 17-year-old Ceccon took bronze in this event in Buenos Aires with a time of 53.65.

Burdisso blasted perhaps an even more impressive swim in the men’s 200m fly, ripping a winning time of 1:57.14. He, too, not only won the men’s junior final, but beat the time of the 19&O age category as well. The winner of the senior final was Steven Sholdra, who mustered just a 2:04.41.

For Burdisso, the teen roared out in front with a quick split of 54.43 before quieting the jets immensely to a back half of 1:02.71. His ultimate time of 1:57.14 is a new personal best, shaving .02 off of the 1:57.16 he threw down for bronze in Buenos Aires at the Youth Olympic Games. It also overtakes the previous senior and junior meet records, with the former held by Hungarian legend Laszlo Cseh in 1:57.37 form 2016.

Burdisso remains as the 9th fastest swimmer in the world this season in the event.

Both Italian youngsters competed in the men’s 50m free final, but it was Leonardo Vimercati who came out on top. Vimercati notched a winning time of 22.85 to hit the wall a fingernail ahead of Burdisso who settled for silver in 22.86. Ceccon was over the 22-second barrier in 23.04 to round out the top 3.

Italian Fabio Scozzoli followed up his 50m breast meet record with another record-breaking effort this evening. He collected a winning 100m breast time of 1:01.56 for a new meet record, beating the 1:01.63 established by Luca Pizzini last year.

In additional youth action, Scottish swimmers Kathryn Goodburn and Emma Russell went 1-2 in the women’s 50m free, with the former winning in 26.81 to the latter’s 26.85.

Russell came away with the 200m freestyle youth win, however, punching the wall in 2:05.92 for first place.

FB is the real deal. I wonder if he will defer enrollment until after the Tokoyo like some have done in the past? He’s a real contender for a medal there!

Burdisso PB in 200 fly remains the 1.55.97 swum last summer at Euros in Glasgow, but this 1.57 low is a huge result considering the training period and that the race was the sixth of his meet.