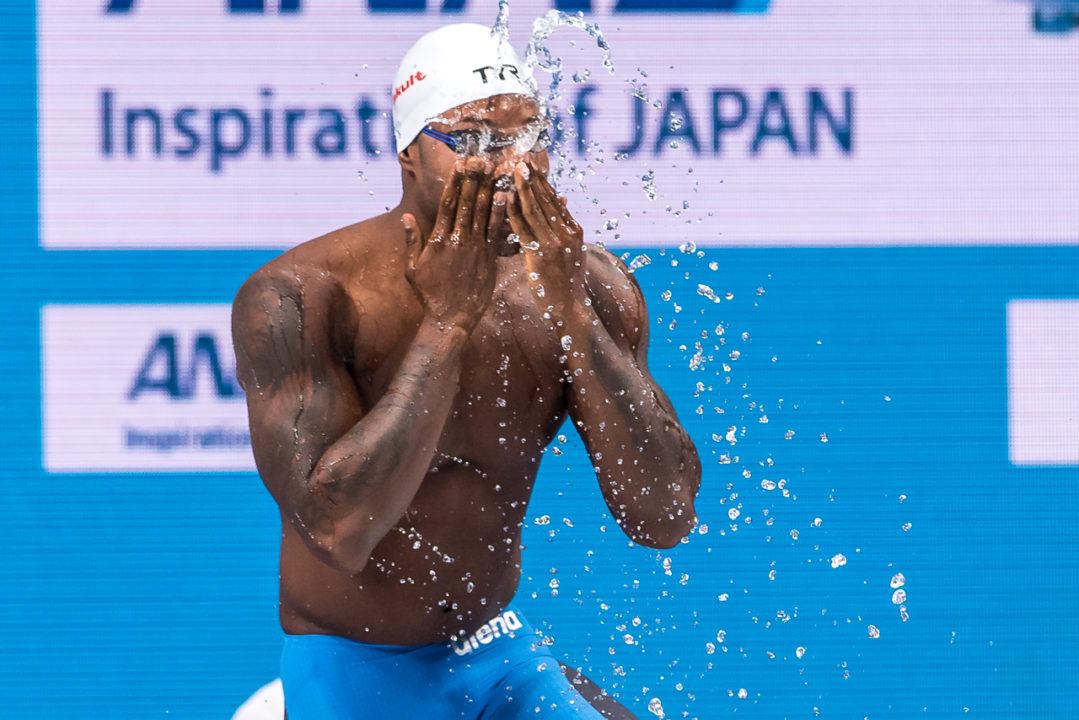 Six meet records bit the dust during tonite’s finals session at the 2019 Geneva International Challenge Meet. The competition is unique in that it hosts two separate finals per event, with women aged 17&U in one final, while women aged 18+ comprise a 2nd race. The same holds true for the men, but their ages are broken up between 18&U and 19+. That means that junior swimmers got a chance to make their mark on this meet, one of the reasons why a strong emerging Scottish contingency was attracted to the Swiss meet.

After claiming 2 top seeds in this morning’s heats, French National Record holder Mehdy Metella followed up with gold medals and 2 new meet standards to boot. First in the men’s 100m freestyle, the 26-year-old touched in 49.18 to represent the only competitor in the 19+ final to hit sub-50. His time overtook the previous meet mark of 49.29 set by Hungary’s Nandor Nemeth at the 2018 edition of the meet.

Metella’s second win came in the 100m fly, where the Frenchman notched a solid in-season effort of 51.93. Splitting 24.38/27.55, Metella easily surpassed the previous meet record of 52.55 held by Hungarian legend Laszlo Cseh since 2016. With his outing tonight, Metella now ranks as the 3rd fastest LCM in the world this season.

Making waves in both the aforementioned events for the men’s 18&U category was Italy’s Federico Burdisso. In the 100m fly junior final, the teen cruised to the top of the podium in 52.71, a new meet record time for his age category. That outing crushed the previous meet standard of 53.75 set by Frenkel Tomer last year.

Alessandro Fusco of Italy was tonight’s winner of the men’s 19&O 200m breaststroke, touching in 2:15.18 and match the existing meet record. His time beat the field tonight by over 2 seconds, but a ways off from his own personal best of 2:12.47 from last year’s European Junior Championships.

In the women’s 200m back, Maria Ugolkova capitalized on one of her top-seeded swims of the morning with a finals gold in 2:14.95. That took the race by almost 5 solid seconds. The 29-year-old Swiss swimmer was back for more, clinching the women’s 200m IM in a time of 2:15.12. That shaved .15 off of her own meet record from this time last year.

Of note, the Scottish duo of Ellis Shiels and Ellie Turner went 1-2 in the women’s 17&U 200m backstroke race. Shiels hails from Milngavie & Bearsden and clocked 2:18.67 for the junior gold, while Carnegie’s Turner finished just under a second behind in 2:19.41.

Shiels currently ranks within the top 100 British 200m backstrokers of all-time with her personal best of 2:16..01 from last year’s Glasgow International Swim Meet. As for Turner, her PB rests at the 2:16.65 clocked at last year’s British Summer Championships.