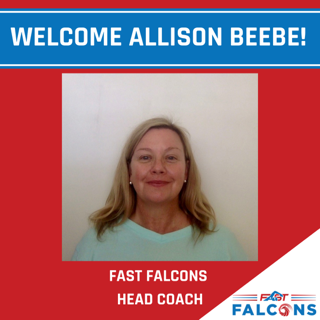 As Head Coach, Beebe will lead the FAST Falcons club team at all competitive levels while coaching these swimmers to attain their personal best.  Current photo via FAST

Courtesy of FAST, a SwimSwam partner.

“I am excited to join the FAST Falcons team! The FAST facilities are top-notch, and the possibilities are endless. I am equally impressed with the leadership teams’ ethics and values, and I look forward to working with everyone to help this program reach its potential,” says Coach Allison Beebe.

Beebe’s coaching career brings valuable experience and knowledge from coaching at the international, national, collegiate, and age-group levels. She has guided over 100 swimmers to compete at the collegiate level and has developed three US National Team swimmers, one of whom, won an Olympic gold medal.

Beebe comes to FAST after spending five years with the Santa Clara Swim Club, where she was the High Performance Lead Coach and interim Head Coach. While at Santa Clara, Beebe coached multiple nationally ranked swimmers including two #1 nationally ranked swimmers and six first-time US Olympic Trials or World Champ Trials qualifiers. Beebe also served as an assistant coach for the Cali Condors, who were the 2020 ISL Team Champions.

As a career club coach, Beebe understands the importance of creating an environment that emphasizes long-term athlete development and provides a strong foundation for all age-group swimmers. Circle Square Foundation Trustee Kenneth D. Colen says, “We are pleased to welcome Coach Beebe to the FAST Falcons. Coach Beebe has a unique ability to develop people to their fullest potential – swimmers, coaches, and athletes of all abilities. We value her passion for swimming and look forward to her impact on the aquatics community and beyond.”

The FAST Falcons are the official club swim team of Florida Aquatics Swimming & Training (FAST) in Ocala, Florida. For more information about the FAST Falcons and FAST, please visit FloridaFAST.com and follow us on social media @swimfastfalconsfl.

Great news! Welcome back to the deck Allison!