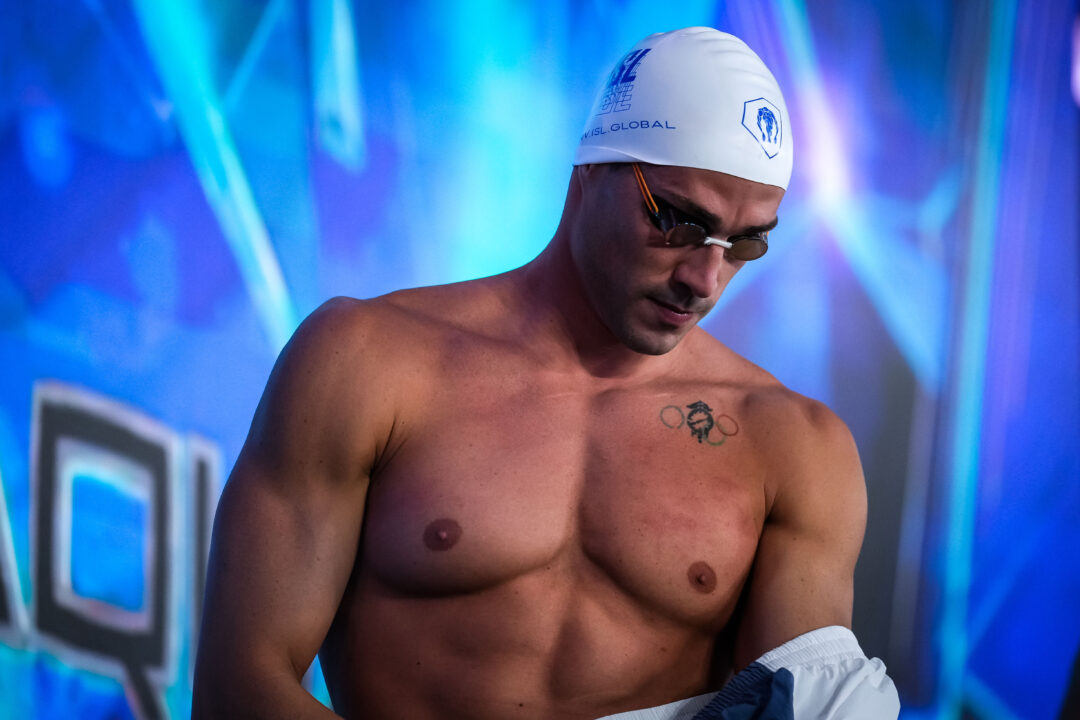 Fabio Scozzoli (above), along with at least three close contact, are now required to quarantine for 7 days and will miss the remainder of the Italian Championships. Archive photo via Mike Lewis/Ola Vista Photography

SwimSwam Italia editor Giusy Cisale learned on Wednesday that 33-year old breaststroker Fabio Scozzoli has tested positive for COVID-19 and is under quarantine.

Scozzoli posted the news on his Instagram, asking that those who he has made close contact with recently to get tested.

Detti said earlier this week that he has been dealing with a Cytomegalovirus infection, which includes symptoms of fatigue, fever, sore throat, and muscle aches. The virus rarely causes problems in healthy individuals.

Scozzoli says that he has been fully vaccinated, and got tested on Tuesday after experiencing fatigue, tiredness, and a slight fever.

Scozzoli recently returned to Italy from Eindhoven, where he raced for Aqua Centurions in the final match of the ISL Playoffs. There, he won the 50 breaststroke, but Aqua didn’t advance to the final.

Carraro (gold in the 100 IM) and Ciampi (silver in the 400 free) are prequalified for Italy’s Short Course World Championships roster via their podium finishes at the European Short Course Championships that happened a month ago.

Individuals who test positive, or who have had close contact with someone who tested positive, are required to quarantine for 7 days in Italy. After 7 days, with a negative test, they are released from quarantine. That means all four swimmers will be ineligible to compete at the rest of the Italian Championships.

While Italy, like most of Europe, has seen a rise in cases of COVID-19 over the last month, the rise has not been as drastic. The country has averaged 12,344 daily cases over the last week according to Worldometers, which is a rate of about 20 cases/100,000 in population. That is one of the lowest rates in Europe and is about one-third of the rate of the European Union as a whole.

Italy has detected its first cases of the newest variant of concern, known as the omicron variant. The country has restricted travel to people who have been in South Africa, Lesotho, Botswana, Zimbabwe, Mozambique, Namibi, or Eswatini in the last 14 days.

If it were up to you, what should happen to Kitajima, Van Der Burch and Cody Miller among others?

CVD stopped after London, as far as I can tell. Underwater view in Rio shows he didn’t do any extra kicks off start or turn, and he went a time in Rio that would’ve still won gold in London. Everyone that I can get a good angle on in the London race had very questionable downward motion of the legs upon entry, so he was somewhat correct in saying that “everyone” at the elite level does it at the time.

I completely agree, Sprenger clearly did it in the semi at London, so can’t blame CVD for doing it in the final.

I expect to see a bed pic with nice crisp white sheets & sun streaming in from a glass door opening on to a lovely tiled patio .

Bed hair would be a bonus .

Dressel out with the flu, and Covid is here to stay, and at some point we will all get some form. Vaccinated or not, the symptoms were mild or non existent in athletes. ( with very few exceptions) . If these kids would be allowed a normal life, this virus would have run its course. Instead, how long will this drag out?? Years?

They are getting to train and compete. Letting this disease run its course like wild fire would lead to more deaths and more mutations. I would rather see as many people make it through each surge as possible.

You would hope Carraro was deemed a close contact given they are in a relationship!