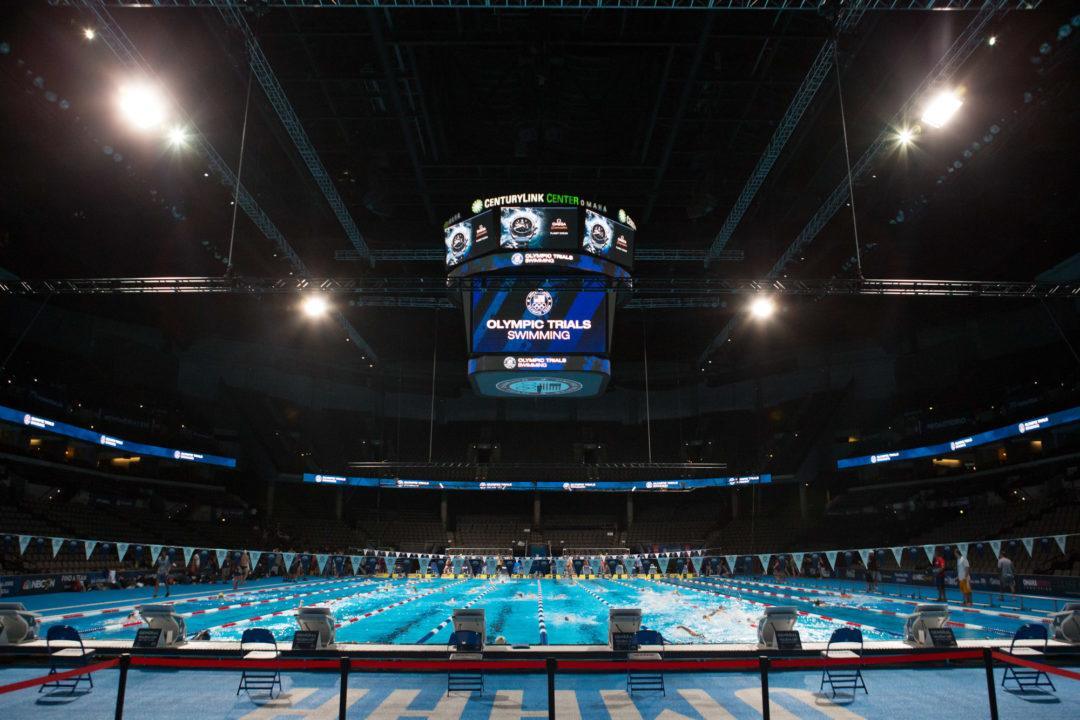 We run through the event schedules for both waves of U.S. Olympic Trials, including the four-day Wave I and the eight-day Wave II. Archive photo via Tim Binning/TheSwimPictures.com

Tickets for the US Olympic Swimming Trials will all be refunded with a new round of sales. Prior ticketholders will have priority.

Caeleb Dressel Entered in 200 Freestyle at 2021 US Olympic Trials

After winning the 200 freestyle at the Pro Swim Series meet, Caeleb Dressel confirmed that he is signed up to swim the race at the 2021 Olympic Trials.

While most of the sport in the US was focused on the NCAA Championships and other collegiate meets, there were 66 new Trials cuts achieved in the last 3 weeks

All U.S. Olympic Trials Tickets to Be Refunded and Resold Due to Seating Change

Per USA Swimming, a new venue seating map was configured to ensure safe competition and to mitigate COVID-19 infection spread.

This week, USA Swimming split its 2021 Olympic Trials meet into two separate waves in order to limit athlete numbers and promote health and safety amid the coronavirus pandemic.

The current Olympic Trials qualifying standards will allow athletes into the four-day Wave I meet, while a new, tougher standard will allow athletes into the Wave II meet. The top two finishers in each event at Wave I will be able to compete in the Wave II meet the following week, with the Olympic team selected based off of Wave II results. You can read more about the full format here.

Below, we’re running through the event orders for each meet, as they differ quite a bit. The Wave II order is unchanged from the original Trials plan, but the Wave I meet is a shorter, four-day meet using a modified version of the Pan Pacs meet order.

The Wave I schedule is a four-day meet with a prelims/finals format – no semifinals. Most pretty common event combos are fairly spread out between the days, with a few notable exceptions: the 100 free and 100 back are back-to-back on day 1, and any 400 IMers who cross over into the 200 free would have a tough double on day 2.

However, it’s also worth noting that Wave I will feature a good number of single-event qualifiers, with most of the swimmers set up for really busy Olympic Trials schedules getting under Wave II cuts in at least one event. (Any swimmer with a Wave II cut can swim any other events with a Wave I cut at the Wave II meet).

all issues aside I read this and my number one feeling is…excited!

Are they allowing spectators? It seems they were still selling tickets.