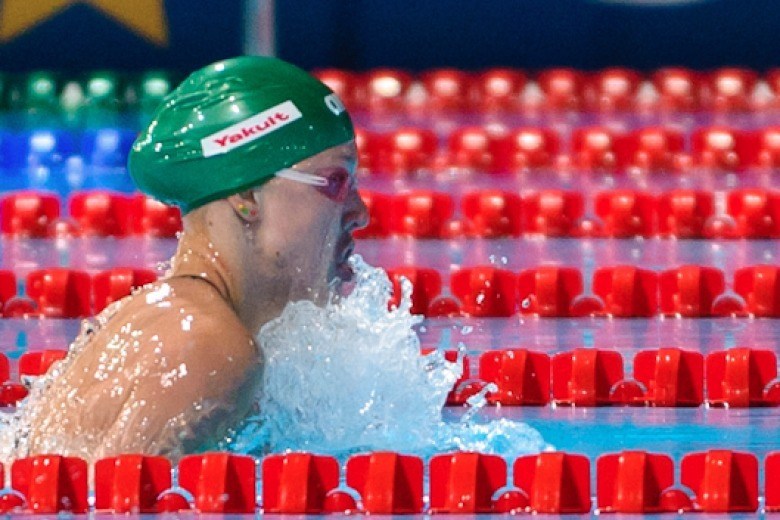 50 breaststroke The women’s sprint breasstrokers will be without the two swimmers who, a year ago, would have been the... Current photo via Victor Puig 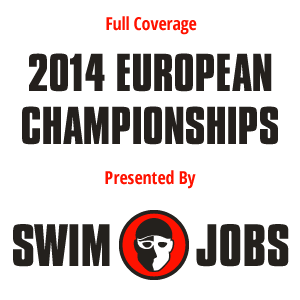 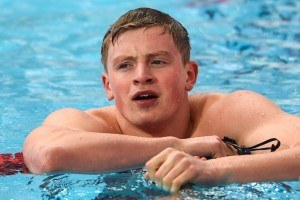 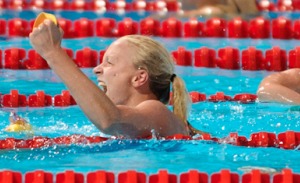 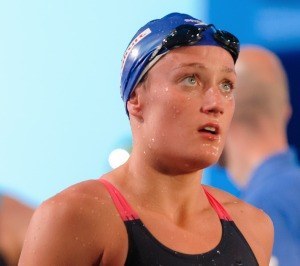 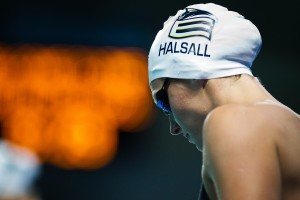 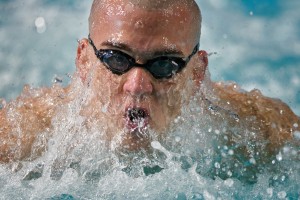 The women’s sprint breasstrokers will be without the two swimmers who, a year ago, would have been the favorites: Ruta Meilutyte of Lithuania and Yulia Efimova of Russia. Meilutyte will swim at the Youth Olympic Games instead, and her plans of travelling for a double have been derailed by the YOG rules requiring athletes to stay in Nanjing for the duration of the event. Efimova is on a doping suspension and will also be absent. With that, this 50 meter title is suddenly wide-open.

Jennie Johansson of Sweden has recorded the second fastest time in Europe this year putting up a 30.39 in July. Having that type of speed a month and a half away from the competition should mean that she is right on pace to swim at her peak in Berlin. Johansson, who won the bronze at the 2010 European Championships and finished fifth at the 2013 World Championships, has a lifetime best of 30.23, which she posted in Barcelona.

Two British athletes have put up the next two fastest times. Sophie Taylor and Corrie Scott both recorded season and lifetime bests in the prelims of the Commonwealth Games. Taylor posted a 30.56, which was a eight tenths of a second faster than her lifetime best coming into the year, but eventually finished fourth recording a time of 31.08 in the final.

Scott, posted a 30.64 in the prelims, which is an improvement of seven tenths of a second in the season. She went on to take the bronze finishing in a time of 30.75.

30 year old Dorthea Brandt of Germany has a great amount of experience racing on the international stage, but primarily in the sprint freestyle events. Brandt comes into the competition having posted a season and lifetime best of 30.77, which improves on her previous best of 30.83 that she recorded in 2013.

200 breaststroke world record holder Rikke Moeller Pedersen comes into Berlin with a season’s best of 31.00. Pedersen is obviously not known for her sprinting ability, but it has been something that she and coach Shannon Rollason have been addressing since the two began working together. She recorded a 30.57 in Barcelona which was a full second faster than her textile best of 31.65 coming into the season.

Despite only having a season’s best of 31.16 Petra Chocova of the Czech Republic should be considered a threat for a medal. The reigning European Champion has a lifetime best of 30.31, which she posted in the semi-final of last year’s World Championships.

The bottom half of the final should be a fight between a couple of under-heralded swimmers from revered swimming countries: Lisa Fissneider of Italy and Moniek Nijhuis from the Netherlands. While both could be very good, we’ll recognize Fissneider here as a 20-year old entering the prime of her career.

If Ruta Meilutyte was to swim the 100 breaststroke in Berlin she would once again be a big favorite, but once again she’ll be absent.

Rikke Moeller Pedersen enters the competition with a season’s best of 1:06.19. She has a lifetime best of 1:05.93, which she recorded in Barcelona where she finished fourth. In 2013 Pedersen improved on her 100 breaststroke best of 1:06.82 by almost a second and if you look at her times at the same time last season compared to this season she looks to be ready to make another solid improvement.

Pedersen finished in a tie tied Jennie Johansson for the silver in this event at the 2010 European Championships.

Sophie Taylor had a very disappointing final in the 50 breaststroke at the Commonwealth Games, finishing fourth, but she made sure not to make the same mistake twice walking away with the gold in the 100 breaststroke. Taylor posted a 1:06.35 to take the event in Glasgow, shaving seven tenths of a second off her previous season and lifetime best of 1:07.08.

Jennie Johansson has won the silver at both the 2010 (tying with Rikke Moeller Pedersen) and the 2012 European Championships. She comes into the event with a season’s best of 1:07.14. Johansson, who finished eighth in Barcelona, has a lifetime best in the event of 1:06.68 which she posted in 2013.

Moniek Nijhuis of the Netherlands comes into the championships with the next fastest time of 1:07.81. She has a lifetime best of 1:07.40 which she posted in 2013.

Fiona Doyle should not be overlooked in this event, probably not to medal, but possibly to finish in the top six. Doyle, was not eligible for the Commonwealth Games, has been able to focus on peaking for her events in Berlin. She has a season’s best of 1:08.72, but has a lifetime best of 1:07.66.

Just as Ruta Meilutyte is the class of the field and the favourite in the sprints Rikke Moeller Pedersen is just the same in the 200 breaststroke. Pedersen has a season’s best of 2:19.61 which is only five tenths of a second slower than her world record of 2:19.11, which she posted in the semi-final of the 2013 World Championships. She also fell victim to Efimova in the final and walked away with the silver.

Pedersen, who finished fourth at the Olympic Games in London, dropped over two seconds off her lifetime best in 2013. She is also coming into Berlin with a lifetime best that is over three seconds faster than any of her competition.

Jessica Vall Montero is entering the championships with a season and lifetime best of 2:23.96. Just as she has in the 100 Vall has made incredible improvements in the 200 breaststroke in the last two years. She went from a 2:29.20 in 2012 to a 2:26.62 by the end of 2013 and has dropped almost another three full seconds this year.

Vall experienced her first taste of success on the international stage at the 2013 Mediterranean Games where she won the event. She went on to make the semi-finals in Barcelona at the World Championships.

18 year old British teammates Molly Renshaw and Sophie Taylor come into the event with the exact same season and lifetime best time of 2:24.46. Although Renshaw did not match her season’s best at the Commonwealth Games she did post a time of 2:25.00, which was good enough to earn her the silver.

Taylor’s performance was another story coming into the games she had posted a 2:24.46 in April, at the games she recorded a 2:30.66 in the prelims.

Before May of this year Russian Vitalina Simonova had not done a lifetime best in the 200 breaststroke since 2006 when she won the World Youth Championships at the age of 13 posting a 2:26.58. Simonova recorded a 2:24.93 in May and followed that up with a 2:24.66 this July.

Marina Garcia Urzainqui of Spain comes into the championships with a season’s best of 2:25.12. Garcia had an outstanding 2013 World Championships coming into the competition with a textile best of 2:25.12 and posting a 2:22.88 in the semi-final, setting a new national record in the process.

With Efimova out for good reasons, there’s not much suspense in these breaststroke races.
Meilutyte is so ahead in the 50 and the 100.
And RMP is so ahead in the 200.
It’s interesting to see how good the Spanish girls are on breaststroke.
If only they could give their secrets to the French team. Our best breaststrokers were in 1.09 and 2.30 at French Championships. 😥

The secret off sucess of Jessica Vall is easy: she is calm and relaxed…And she has more time for training!

Agree with 50, however, Meilutyte wont be swimming 100 in Berlin as she will be at YOG that time

I don’t think Meilutyte is planning to swim the 100 in Berlin because she is competing in the YOG, unless she has changed her plans.

50 and 200 definitely little suspense barring DQs or major disasters, but the 100 without Meilutyte could be quite a scrap.

What’s happened to Viktoriya Solnceva this year? She looks like one to watch for the future but I’ve not heard of any fast times for her in 2014.

Mwilutyte and her coach Rudd have stated that Ruta will swim 100 in Nanjing, and therefore will not have sufficient time to be back in Berlin for the 100.

When researching and writing this I was left with the same question. It doesn’t appear that she has put up any times this year and I am not sure why.