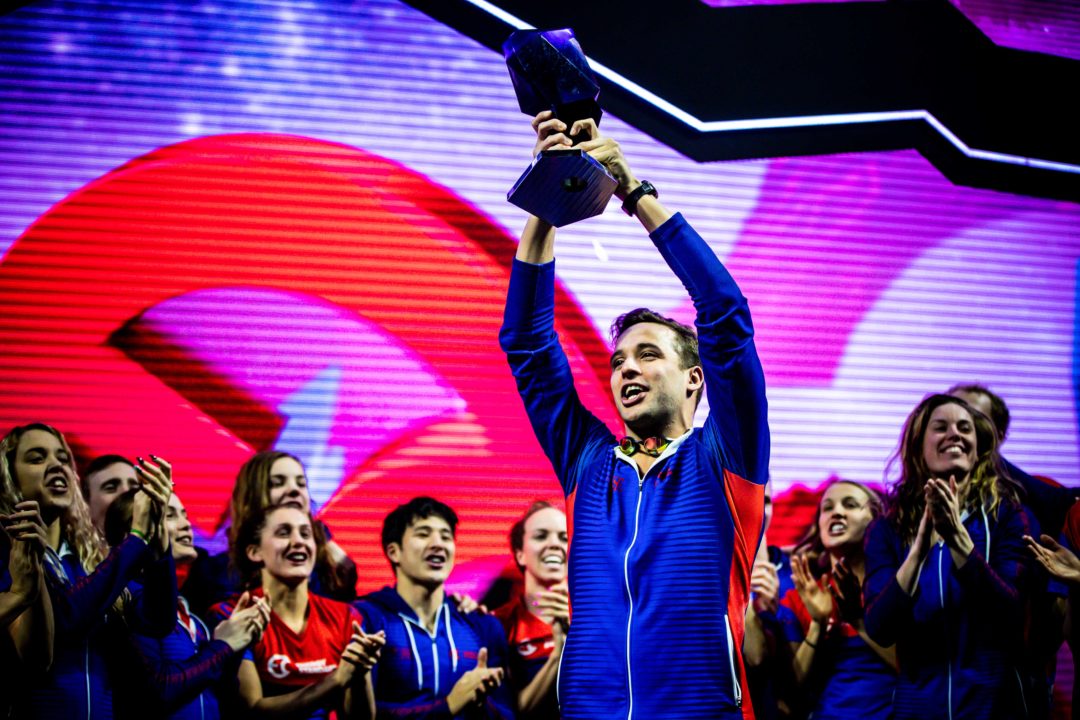 The defending champions Energy Standard are expected to host the season-opening meet of season 2 of the ISL in Paris for the first time. Archive photo via Jack Spitser/Spitser Photography

The 2020-2021 International Swimming Leauge (ISL) season will kick off in September in Paris, France and be hosted by the defending champion Energy Standard club.

Last season, while a few teams had true home meets (Aquacenturions in Naples, Iron in Budapest, DC Trident at the University of Maryland), the meets were jointly-organized and run. That season, with 8 teams and a 7-meet schedule (6 regular season and 1 championship) was a big learning season, but year 2 of the ISL is expected to have more focus on true ‘home meets’ organized by host teams, though the ISL has not yet released a full scheduled to indicate to what extent that will be true.

While the Energy Standard training group that makes up most of the Energy Standard ISL team is based at the Gloria Sports Arena in Turkey, Paris is being considered the club’s official home base. The team’s general manager Jean-Francois Pimiento is French and the club does have an office in Paris. The team counted a Frenchman, Florent Manaudou, among its star swimmers in year 1, in addition to European Champion Fantine Lesaffre.

Energy Standard is the only of the 10 ISL teams for year 2 that has begun announcing its roster. Among the noteworthy additions are the DC Trident’s top scorer Siobhan Haughey, defending Olympic Champion int he 50 free Pernille Blume, Zsu Jakabos, Felipe Lima, and Jeremy Desplanches.

Year 2 of the ISL will see the return of 8 teams from last season (LA Current, Cali Condors, New York Breakers, DC Trident, Energy Standard, London Roar, Iron, and Aquacenturions), plus the addition of teams based in Toronto and Tokyo (that don’t have names yet).

Can’t even get excited about it right now

same… it’s weird to be thinking about ISL when in my city, daily life is all but halted with all schools and most public spaces closed….

And can you imagine postponing the Olympic Games and it conflicts with ISL?? What a hypothetical mess…

Anyways, kinda off to be even announcing it right now.
Terrible timing!

I don’t think the ISL stands much of a chance when compared to the Olympics for any athlete.

Looking forward though to accurate tests being distributed in the US on a large scale so we can better understand the severity of this. I still think when it’s all said and done this will be much less severe than the swine flu was in 2009 where we had 60 million infected, 300k hospitalized, and 18k deaths in the US alone.

As a Canadian I looked at some of the stats:
Total Population: 38 million
If 60% of our country gets it and the death rate for those infected is a little lower than being stated now, say 2.5% that means 570 000 people will die here.

That’s if the death rate holds. Keep in mind we have no idea how many have had it.

Something to look forward to after the virus clears

This just in…the city of Paris signs with Energy Standard.