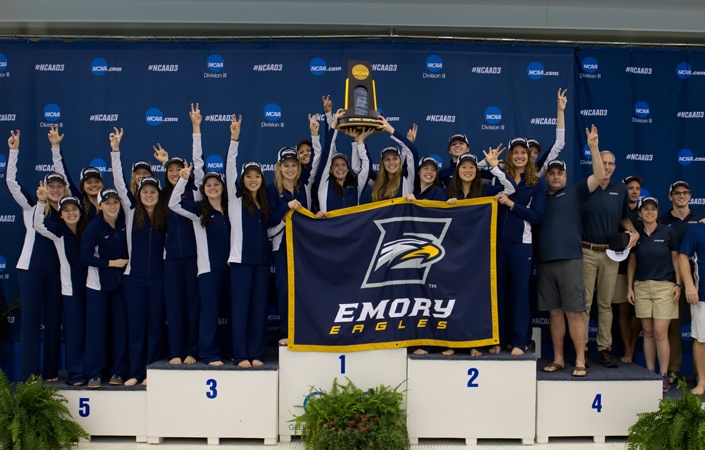 After the midseason meets the Emory women look like clear favorites in Division 3. However the men’s competition is extremely... Current photo via Emory Athletics

After the midseason meets the Emory women look like clear favorites in Division 3. However the men’s competition is extremely competitive. The current Swimulator top times ranking of D3 men has Emory and Kenyon tied with 475 points. Johns Hopkins (406) and Denison are both also within striking distance. Accounting for their elite divers, Denison is about on even footing with Emory and Kenyon. It has been 38 years since a team other than Kenyon or Denison has won a men’s Division 3 swimming title (the last was Johns Hopkins in 1979). Led by world class breaststroker Andrew Wilson, Emory has a significant chance to break the NCAC dominance of the division.

The Emory women are 174 points clear of 2nd place Kenyon. The race for second is competitive with Kenyon at 424 and Denison at 411. Last year’s 3rd place team, Williams, is 16th with 56 points. Last year at this time they were 23rd with only 29 points. Without a mid season rest they really suffer in the top times rankings. In an average time ranking from this year they jump to 6th with 178 points.

Women based on top times:

Men based on top times: