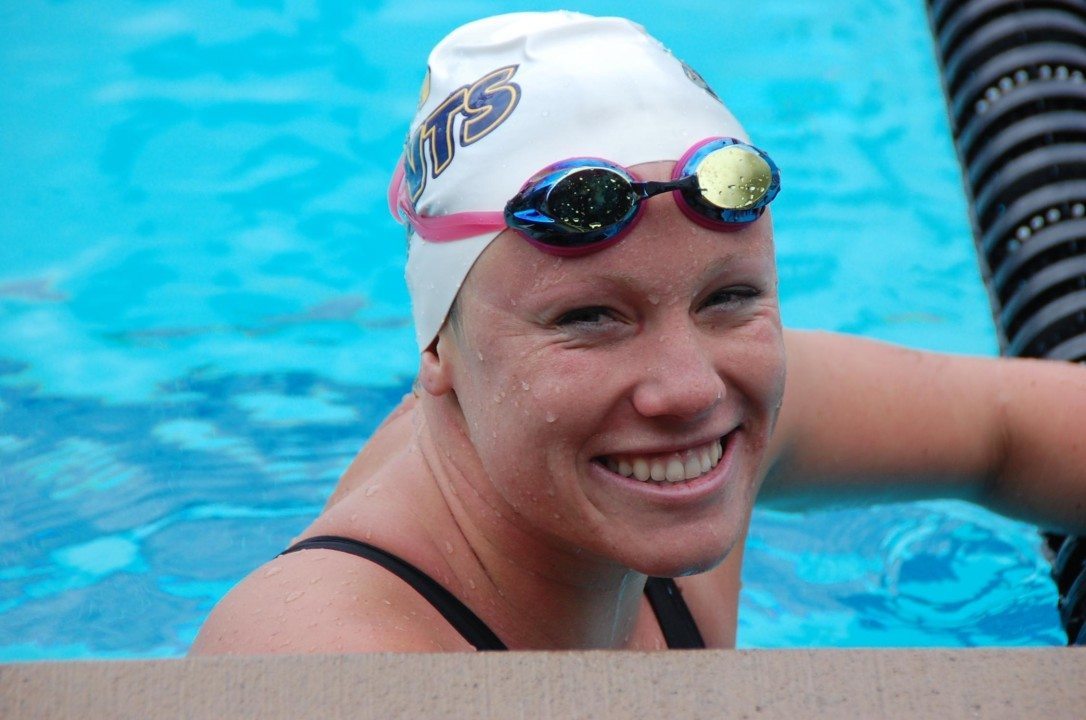 Eastin was quick in the 200 IM on day 1, but her 400 IM instantly becomes the new highlight of the meet so far. She was 4:01.04, which is 1.4 seconds faster than the graduated Sarah Henry went in winning last year’s national title.

Eastin pretty well crushed every leg of this race. She led the field with a 54.8 on fly, and by the time she rattled off a 1:00.2 on backstroke, she had accumulated a lead of about three seconds on her closest challenger, Texas A&M’s Bethany Galat. Eastin was 1:08.7 on breast and 57.1 closing things down on freestyle – comparing those results to last year’s NCAAs, Eastin would have a significant advantage over every returning swimmer in every stroke but freestyle, where Georgia’s Hali Flickinger would have challenged.

That wasn’t the only big news for Stanford. The Cardinal 200 medley relay also popped off a huge swim of 1:35.92, a nation-leading time that would have been 3rd at last year’s NCAAs. It was defending breaststroke champ Sarah Haase who nabbed the lead for Stanford, splitting 26.4, and Lia Neal anchored in 21.8.

Also on the relay were sophomores Janet Hu (24.28 back) and Ally Howe (23.37 fly), who flip-flopped roles from last year’s NCAA relay.

Hu was in the hunt for a pair of individual wins, getting one in the 100 back. Hu was more of a butterflyer as a freshman, but appears to be branching into the backstroke events in her second season. She beat out Texas A&M’s Beryl Gastaldello in the second of two races between the two, going 51.45 to win the 100 back over Gastaldello’s 52.31.

On the men’s side, one of the night’s best swims came from Utah senior Kristian Kron, who rolled to a 2:46.77 in the 400 IM. That will rank at #2 in the NCAA for now, pending the results of this weekend’s other invites, which aren’t yet reflected in the national rankings.

Air Force won the 100 breast in a night where the men’s events were split pretty evenly between multiple teams. Michael Barnosky went 53.08, just missing his own school record to pick up the win there.

Air Force also took the 200 medley relay in 1:26.37, which (again pending other results this weekend) will rank behind only Cal in the NCAA standings. That was keyed by a 23.5 from Barnosky and a 19.2 out of anchor Jordan Dahle.

Other big swims from an action-packed night:

Does anyone know why Brock Bonetti didn’t swim the second day of Art Adamson after posting at least two PB in the 200 IM and leadoff of the 400 medley relay?

Vote Up00Vote Down Reply
B

He left for his sister’s wedding…

Did Stanford taper for this meet? These are some great times putting up by those girls. I can’t imagine if Simone Manuel and Katie Ledecky were to be with the team, how good they would have been!

Stanford and Texas A&M girls always swim very fast times at that meet. That’s their rested meet of the regular season. No surprise we see great things. Take the results from last year and you will see very fast times too. For example Simone Manuel swam 21.59/46.62/1.42.03. The 400 IM is my favorite race so very pleased to see Ella Eastin already at that level. Look at my prediction from last May. 🙂 http://swimswam.com/ella-eastin-breaks-200-im-national-independent-high-school-record-in-california/ The sub 4 minutes I predicted for her freshman year looks more and more plausible now. It can happen next March. She really has no weak stroke. The clash with Flickinger will be very intense. Very good meet for Béryl Gastaldello too. As a freshman she… Read more »

Bobo, how come your predictions always come true? What’s your secret?
I wanna be like you!