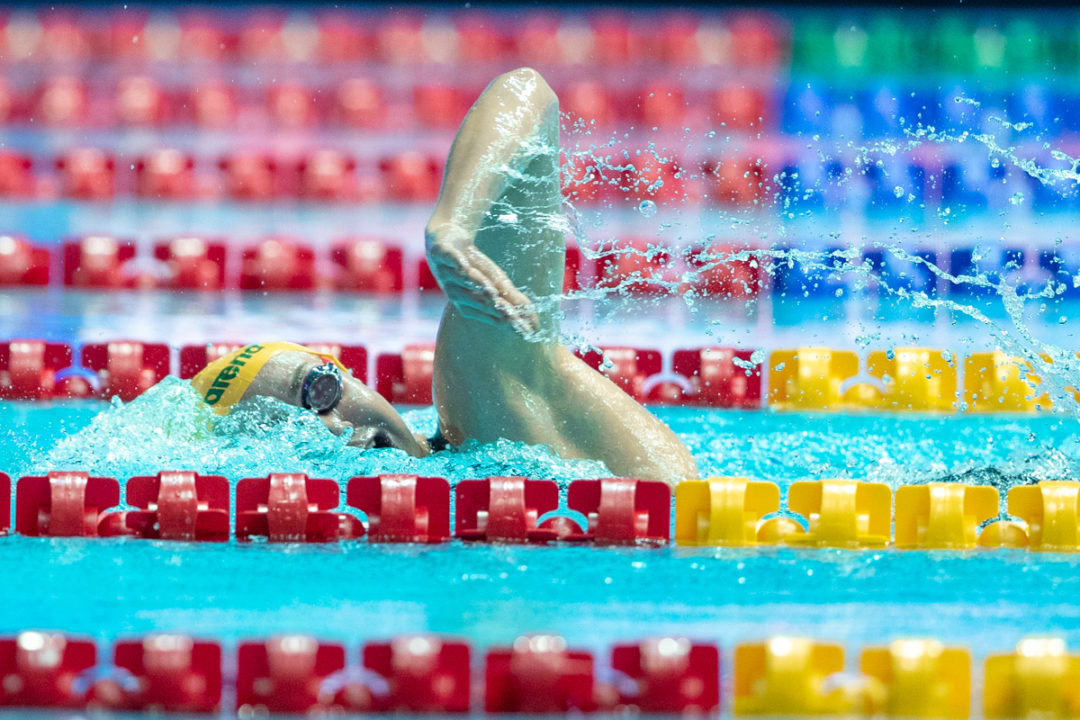 Australia looks tough to beat in the women's 4x200 free relay, with four of the top seven 200 freestylers this season, including #1 Ariarne Titmus. Archive photo via “Rafael/Domeyko Photography”

Australia snapped a seven-year run for the U.S. in this event at 2019 Worlds – and the Aussies look to be the favorites again, with two legs currently faster than the fastest U.S. leg in season-bests:

This is the odd relay in which aggregate times are often faster than actual times. That’s because relay starts factor in less, and the taxing nature of the race makes it unlikely a team will have all four legs swimming their absolute best in the final. (The relay comes right in the middle of the Olympic lineup, too).

Australia set the world record to 7:41.50 in 2019. So even if this aggregate time is a little optimistic, there’s still a great chance that Australia can lower its own world record. They currently have 4 of the top 7 200 freestylers in the world for this season, including world leader Titmus.

China isn’t exactly an apples-to-apples aggregate – there’s no great fourth option in world ranks, so we pulled Wang’s split from the 2019 World Championships and added 0.5 seconds to try to factor out a relay exchange.

Most would expect Ledecky to be  a bit faster than this with a full rest. But she’ll have to be to keep the U.S. ahead of China, much less to put them anywhere near Australia. Schmitt is a vet, but Madden and McLaughlin are both first-time Olympians.

Canada won bronze over China in 2019. The 14-year-old McIntosh has been a standout of Canadian Trials so far.

Great Britain was the top wild card selection, but they bowed out of this realy, leaving Italy as the top qualifier (7:56.72) beyond last year’s Worlds top 12. They should have world record-holder Federica Pellegrini in the mix.

Russia could have some intriguing upside, with all four projected legs between 1:57.5 and 1:57.9 so far this year. Anna Egorova has been the fastest this season, and the aggregate time would be in the 7:51s.

Hungary took silver (7:56.26) ahead of Italy at Euros this spring, but would need big drops to earn an Olympic medal. They did have Boglarka Kapas anchor in 1:57.5.

I really can’t see Australia being beaten. The USA has scope for improvement but even then Australia would have to massively underperform. Titmus and McKeon will be rested for the final. It’s likely McKeon will withdraw from the individual 200 with Wilson taking her place. If she swims to expectations she will also be rested. The heats team could then be Neale, O’Callaghan, Harris, Throssell. If none of them shine Cook could be brought in for the final. The 400FS is a good proxy for the 200FS. If she swims well in the 400 it would indicate she’s in good enough form to improve on the 1.56.95 she swam in the B final at trials.

I’m not sure what the deadline is but McKeon would have to withdraw in advanace because Wilson can’t replace her if she withdraws at the games. I also think it’s a good idea she not swim the individual 200 and should go all in on 100 free gold later in the meet.

We don’t know what’s happening behind the scenes already.. they’re all in Townsville now I think plotting their Olympic attack

I think McKeon likes her chances of a medal in this event. I can’t see her giving it away.

I don’t think anyone is discounting her chances for a medal in the 200.

Agree. Can’t see Em giving up the 200m FS, this is her original pet event (eg. Comm games 14 and Olympic bronze 16). She is tough and a proven racer. Big chance for Aussie 1-2 is Tokyo!

Granted McKeon has a loaded schedule ahead of her but I cannot realistically see her dropping the 200FR or any other individual swim. It goes without saying that they will look to avoid her swimming relay heats which should not really be an issue with the potential exception of W4XMED which will hinge on the performance of the 2nd string 100flyer. If there is a race “to go” from her schedule, its potentially the MMR which is a weaker medal chance that the 3 women’s relays.

As for the AUS W4X200; I’d say that 3 of the finals line-up look locked in with Titmus, McKeon & Wilson who are all experienced with intl relay “runs on the board”. Neale’s performance… Read more »

I think throssell will be fine. she barely missed a very tough qt, which isn’t far off her pb which got her into the 2019 final, and she had good performances all round at those worlds. seebohm has been a mainstay on this relay for over a decade (minus 2019) and is still in 58 form, hansen was good in 2018 and solid in 2019 (got them through the heats just fine in 2019 too) and wilson has been very consistent this year, so i don’t think throssell will sink the relay even if she drops a bomb

agreed on neale. she’ll do enough to ensure australia gets a good lane in the final, but I trust Harris & O’Callaghan… Read more »

If Throssell swims to around her Trials time in the individual 100fly then I would agree they can trust her with 4XMED heats.

As regards other legs, Seebohm is actually pretty erratic in this relay but they certainly do have some credible alternatives in O’Callaghan (sub59 at Trials) & even Wilson (59.0 at Trials) for that leg.

Hansen does have a decent CV for this relay (split a 55mid at PP). Whether they go with her for both swims may depend on whether Hodges fires in the 100BRS or a crash n burn.

Agree they have a number of options for the free leg that many countries would love as 1st pick; namely Wilson, C2 or maybe one out of… Read more »

Do the women’s Medley relay
That’s where it gets really interesting.

Thanks for all your work. Great analysis as always.

Here is a tease:

Help us, Obi-Wan Ledecky! You’re our only hope!

Emma McKeon swam 52.19 in the prelims

The IOC does not dole out medals for performances in the heats and/or semifinals.

To me ledecky Madden and McLaughlin are the obvious choice for the final, I’d Schmitt is on form a drops a mid 1:55 in the individual (an makes the final) then you can put her on the relay,

Walsh was very good at ncaas in 200 free, but I see them using either Sims or Schmitt as the last spot depending on their form Schmitt in individual and sims in prelims relay.

It’s funny that Manuel gets mentioned and it’s immediate downvotes, but all I see from the suggested swimmers is 157s thru 159s. 😂

Simone Manuel may not be in any condition to swim the women’s 4 x 100 meter freestyle relay.

There isnt enough time to significantly change her conditioning between now and Tokyo. I don’t know that she would be useful in the 100

Could a 4 from every other country even beat Australia. Katie Ledecky, Yang Junxuan, Summer McIntosh, and someone else. Idk, would they. Probably not.

Haughey, Ledecky and Yang are all 1.54 this season. And McIntosh has that potential.

Does Federica Pellegrini have one last great swim left in her?

Surely China’s 4th option will be Zhang Yufei. Yes, she’s ‘only’ gone 1.57.22 this year but that’s probably more indicative than a split from 2019.

She’s the fastest 200 fly in the world this year and top 5 in freestyle so I’d expect she’s well capable of sub 1.57.

The Chinese worry me more so than the Canadians.

I think the Chinese women will exceed expectation this year. Everyone is mostly ignoring them after subpar 2016. Likewise Canada was being understated until this week

She does have the 200 fly final in the same session as this 4×200 free final, though. She’s certainly capable of doing both. But that’s a really tough double. I’ll be curious what they decide to do with her lineup.

That is how we got known about McLaughlin first time: perfectly executed 4×200 after 200BU

glad to have you back and safe!

Was wondering where you were during Aussie and US trials

Didn’t know that Jared. Thank you. That does make a difference then. I still think I’d chuck her in.

Definitely agree, 154 low is definitely there