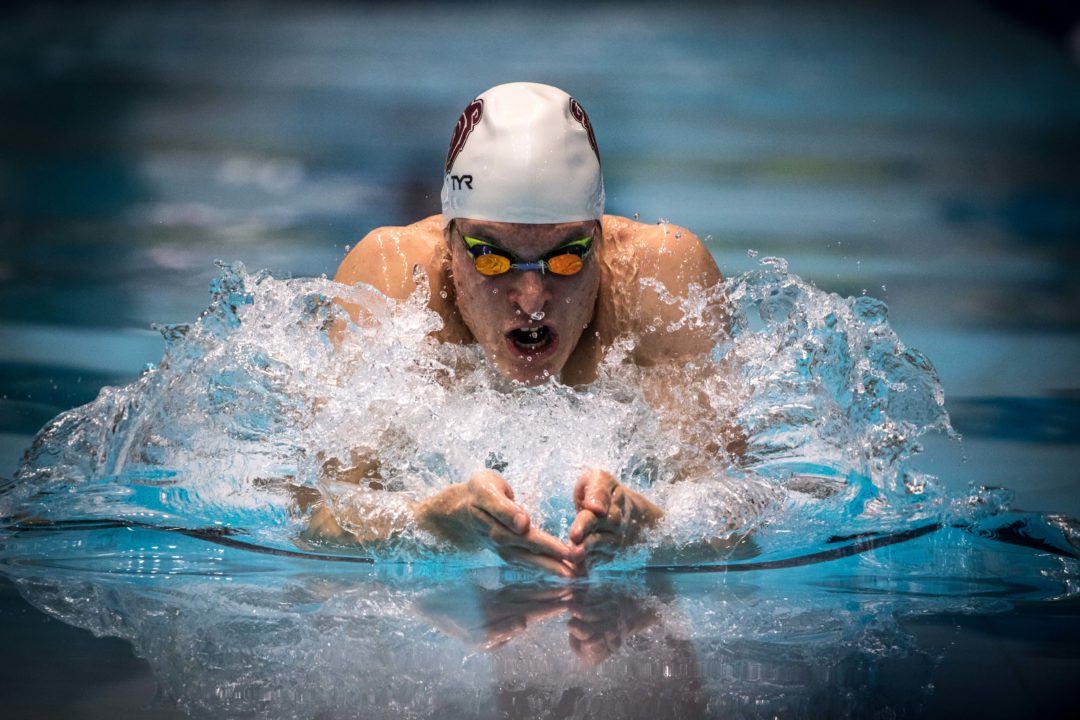 Missouri State's Artur Osvath broke school and pool records last week in a stellar 1:53.68 200 breast that should book him a return trip to the NCAA Championships. Archive photo via Mike Lewis/Ola Vista Photography

Missouri State’s Artur Osvath broke school and pool records last week in a stellar 1:53.68 200 breast that should book him a return trip to the NCAA Championships.

Osvath had previously gone 1:55.88 at the Iowa Invite back in December. But he torched that time over the weekend at the Shamrock Invitational hosted by Notre Dame. His 1:53.68 was the fastest 200 breast of the week by nearly two full seconds. (No one else has broken 1:55 since the beginning of 2019). For the full season, the time ranks 5th in the nation, and sits well under the 1:54.49 it took to qualify for NCAAs last year.

After swimming at NCAAs as a freshman and sophomore, Osvath missed the cut last season by about two tenths of a second. His swim this year not only all but guarantees him an invite, it puts him in the hunt for an A final appearance: last year, it took 1:53.10 to make the A final out of prelims.

Reece Whitley swam a 155.29.. so not the best time this week by nearly 4 seconds

Times from the Cal-Arizona State meet aren’t yet appearing in the NCAA ranks. We’ve updated the story.

Not stated in the article or other news coverage i’ve seen is that Artur’swim was done in a time trial by himself during a break in the session. It was the gutsiest swim i’ve witnessed in many years

Swimmers: “Time Trials give swimmers an advantage! They shouldn’t count!”
Also Swimmers: “It’s so hard to swim fast in a time trial! What a gutsy swim!”

This sport thrives on cognitive dissonance. I’m convinced this is the only reason anybody still swims.