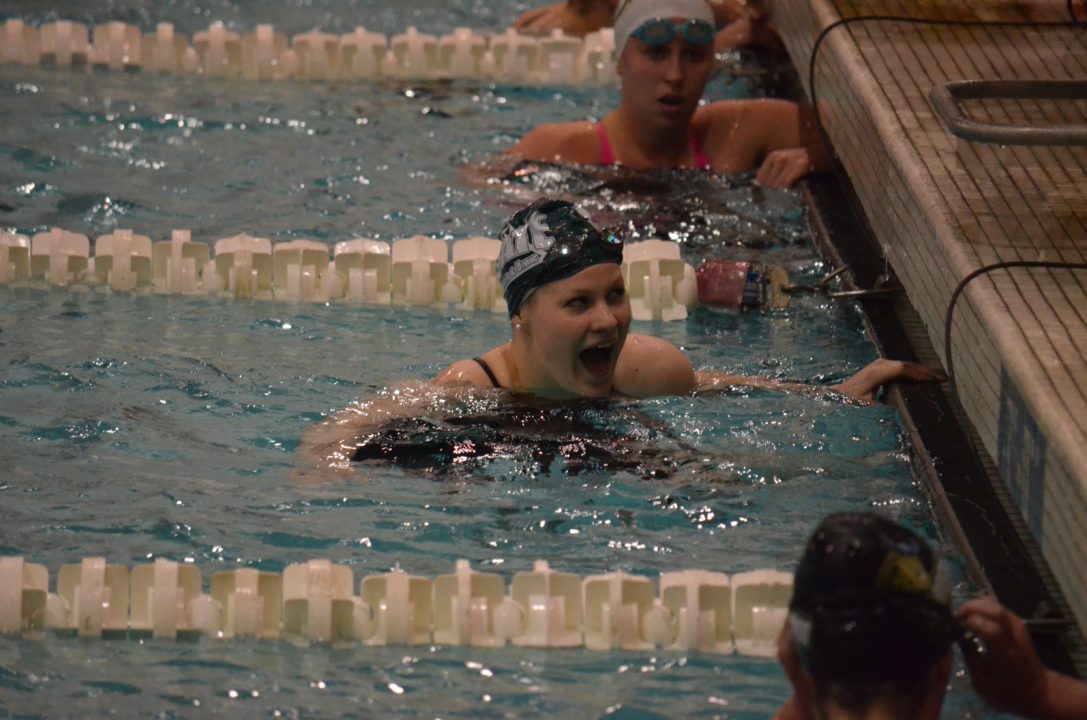 The Delta State women lead while the Lindenwood men are in control with two days left to swim. Stock photo via Delta State

Two days into Delta State’s Christmas Invite, the Statesmen and Lady Statesmen are on fire, shattering 11 school records, some of them multiple times and by multiple swimmers.

The Lady Statesmen are the big winners so far, breaking multiple school and pool records, but several teams have made major rewrites to their own record books over the first two days.

Delta State leads the women’s meet by 20 over Lindenwood, and the Lindenwood men sit in first followed by Delta State.

The meet continues Monday before wrapping up on Tuesday.

Melanie Tombers has been the star so far for Delta State. The freshman broke school records in the first two individual events back-to-back, winning both, and added another win and school mark on day 2.

Both records Tombers took down on day 1 were actually broken by teammates earlier in the day. In the 500 free, Delta State junior Dani Meerholz won the B final, breaking her own school record and going 4:55.49. But one heat later, Tombers took the record herself, going 4:52.06 to blow away the field and break the pool record as well.

The next event was the 200 IM – Delta State freshman Kierstin Page came in with the top seed after breaking a school record in prelims, but Tombers again stole the record at the last minute, winning the event in 2:04.06.

Tombers also won the 400 IM on Sunday night, going 4:19.72 for her third individual school record of the night.

Lindenwood sits second for the women, taking home the title in the 1000 free with Alecia McGillivray‘s 10:07.78. Her teammate Kyleigh Troxel took second place in the event in 10:10.04. Meanwhile Delta State freshman Kim Barna was third, breaking a school record in 10:14.64. West Florida’s Karisa Kostecki broke her school record in the event as well, taking 9th overall.

West Florida has won three events over the first two days and set several other school records. Sophomore Peggy de Villiers went 23.32 to break the old pool record of 23.38 after tying it in prelims. That’s also a West Florida school record. Freshman Carla Robles completed the 1-2 sweep for the Argonauts in the 50. Anna Macht won the other individual race for West Florida, going 1:04.41 in the 100 breast, a new school record. She also set West Florida marks in the 200 IM and 400 IM.

Those three combined with Emily Mitchell to win the 200 free relay, going 1:34.85 and breaking a school record. Delta State was second, breaking their school record in 1:35.67.

Lindenwood has been all over the men’s meet, winning 9 of 15 events so far. Sylwester Borowicz-Skoneczny won the 500 free and the 1000, going 4:27.27 in the 500 and hitting an NCAA A cut in the 1000 with a 9:07.96. That’s also a school record for Lindenwood – amazingly the top 3 Lindenwood finishers were all under the previous school record while sweeping the top three spots.

Lindenwood also swept the diving events, with David Cochran scoring 395.45 on 1-meter and his teammate Schyler Hohenberger taking the 3-meter board in 515.60.

Other wins went to Limestone freshman Tobias Feigl in the 100 breast (54.54) and Missouri Science and Technology’s Jonathan Glaser in the 200 free (1:39.69). In addition, Feigl swam a leg of Limestone’s winning 200 free relay which went 1:22.04. He was joined by Sean Gunn, Douglas Trigo and Christian Larsen.