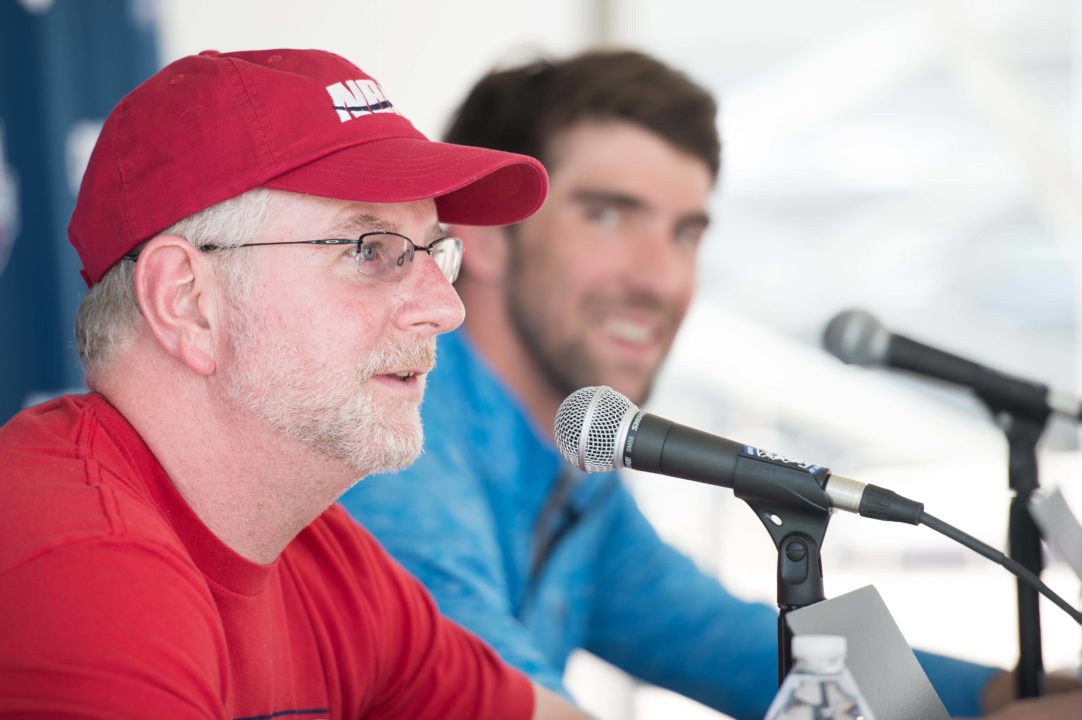 With 291 days remaining before the start of the 2016 US Olympic Team Trials and 330 days before the opening ceremonies of the 2016 Rio Olympic Games, USA Swimming has officially named the 2016 US Olympic staff. Sources have confirmed that David Marsh has been selected to lead the women’s team while Bob Bowman has been selected as the head coach of the men’s team. This is the first time either coach has been named the head coach of the US Olympic team. The official announcement will be made at 12 noon EST.

Bob Bowman has coached the most decorated Olympian of all-time, Michael Phelps, and will likely lead fhim again into his fifth Olympic Games. In the midst of his comeback, Phelps secured the fastest time in the world in three events during the 2014-2015 season and is a favorite to make the Olympic team this summer. He recently moved to Tempe, Arizona and was named head coach of Arizona State. The American stars joining him in tempe for the Olympic year will be Phelps, Allison Schmitt, David Nolan, Chase Kalisz, Cierra Runge and Frank Dyer.

This will also be Bowman’s fourth Olympic games as a member of the staff. He has served as an assistant at the last three Olympic Games, among other international swimmers.

The rest of the staff will be announced live at usaswimming.org at noon EST.

This might not be good for Phelps personally, Bowman will have less time for him

I think right now phelps and Adrian are locks.. But what happens with lochte?

The decision has been taken. It’s final.

There are many great coaches in USA Swimming ranks, but these two have been chosen.

Time to put personal feelings aside and commit 100% support to our Olympic Team.

Monty – I’ll point out that 40% of our audience is not American, so, your “USA” rallying cry might not silence critics completely…

Regardless of what I think about the choices, these are our Head Coaches, and I want to see Team USA swim lights out next year. Congratulations Bob and David.

I’m with SwimDoc on this one: It doesn’t always have to do with the coach. Many swimmers have mixed it up regarding who’s on the deck for them. Sometimes it worked, sometimes it didn’t. Swimmers aren’t machines. Even Allison Schmitt had some issues after London, which had nothing to do with Bowman. Lochte was with Troy for ages and is now in his Marsh phase, and both of those periods would be considered VERY successful. We could pick apart every “World stage event” as having mistakes- personally, Jason Lezak sitting in the stands in London anyone???? Durden is a great coach, but should anyone think he blew his shot? Maybe it’s more a case of other countries programs coming “back… Read more »

Well we all know what happened the last time the selection process was this early 😉 Poor decision to name these two head coaches.

In picking the head coaches for Olympic team it is not early as has been done many times before.
When coaches were elected at a time the olympic coach was elected almost two years in advance by Olympic Committee at convention so the election could be made for Pan am coaches with those not on Olympic Staff. No way it is early for the Head Coaches.

“This is the first time either coach has been named the head coach of the US Olympic team.”

Great forward-thinking decisions! This is fantastic news for Team USA swimmers in that the Oly coaches will not be the same/old-school as in the past. Lets give coaches who use new methods, new thinking, state-of-the-art tools, and positive non-bullying styles an opportunity and this will help USA swimmers perform at their peak. Go Team USA!! Rio will be fantastic.

Not sure if you are referring to a specific coach with your “non bullying” comment?

Anyways, congrats are in order to Marsh & Bowman!

And to add to Bowman’s growing group @ Tempe, I believe that Felicia Lee is now also training with Bob (formerly with Stanford).

I was just saying I don’t think she moved to Tempe to train. Just there while Stanford team is in Hawaii.