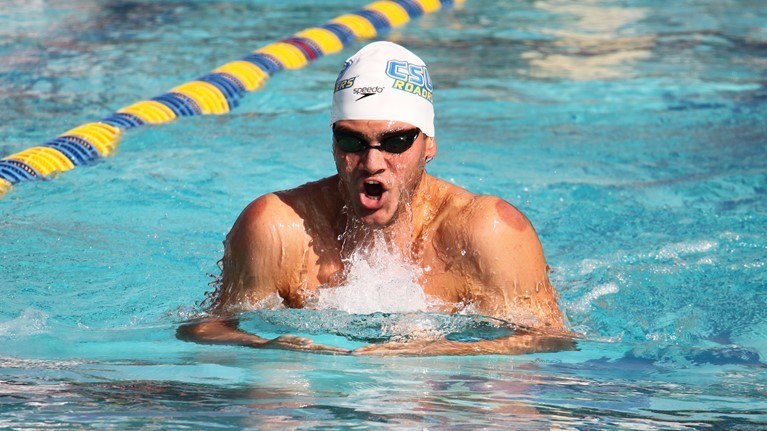 The Roadrunner men's swimming and diving team faced a tough battle against Pacific in their home opener on Saturday. Current photo via CSU Bakersfield Athletics

The Roadrunner men’s swimming and diving team faced a tough battle against Pacific in their home opener on Saturday. CSU Bakersfield managed to edge the Tigers for a 154-134 victory in front of 40+ former `Runners on alumni weekend.

“A lot of seniors from last year and the year before were here,” said Chris Hansen, CSUB’s Director of swimming, “so, most of our sophomores and up knew a lot of the people who came to watch. I think the alumni really helped provide a great atmosphere for our team.”

Hansen highlighted some of his top men’s swimmers of the meet: “Kris Rogic‘s 200 IM and 100 back was big time for us. Lovre Soric always does what he has to do. We’re on fire this year. It’s going to be interesting to see what happens.”

After the CSUB men dropped the opening relay, sophomore Noah Hultner and junior Owen van Krimpen got CSUB back on track with a 1-2 finish in the 1000 free. Hultner ran away for a big win at 9:40.31 while van Krimpen picked up four more vital points with a time of 9:46.30.

Junior Jake Chir earned a victory in the 100 breast (57.08) in another tight race with Pacific. Freshman Loren Gillilansnuck in a win in the 50 free by just five hundredths of a second with a time of 21.25. The native of Fort Collins, Colo. went on to pick up a victory in the 100 fly (49.71) as well.

CSUB’s divers competed uncontested as Adam Estrella took wins on both springboards on Saturday with Drew Huerta close behind.

The `Runners will return to action next Saturday in Las Vegas, Nev. CSUB is set to square off against fellow Western Athletic Conference member UNLV on Oct. 21.

CSU Bakersfield’s women’s swimming and diving team cruised to a 184.5-114.5 victory in its home opener on Saturday. The Roadrunners downed Northern California foe Pacific in front of 40+ former `Runners on alumni weekend.

“A lot of seniors from last year and the year before were here,” said Chris Hansen, CSUB’s Director of swimming, “so, most of our sophomores and up knew a lot of the people who came to watch. I think the alumni really helped provide a great atmosphere for our team.”

Hansen went on to say he was pleased with the performance on Saturday: “I felt great about the results. To be honest, I thought it was going to be a lot closer and we were going to have the uphill battle on the women’s side. Jayssie Haynes is swimming out of this world. Maddie Cosgrove, Morgan King, Sabrina Zavala, and Gabi Liedy really set the tone for the women.”

After the `Runner women lost the opening relay, Liedy and Zavala got CSUB back on track with a 1-2 finish in Event 3, the 1000 free. Liedy, a senior transfer, lowered her season-best time by seven seconds to 10:32.62 while Zavala, a junior, finished close behind at 10:33.95.

King, a sophomore sprinter, edged Cooke for a victory in the 50 free with a time of 24.56. Cooke was a mere 0.21 seconds behind to help CSUB extend their lead. King would later add a victory in the 100 free (52.78) while Cooke finished third with another strong time of 53.57.

On the springboards, CSUB went 1-3-4 on the 1-meter and 1-2-3 on the 3-meter to earn big points. Junior Hannah Chernabaeff won both events with scores in the low 200s while senior Donna Rotella raised her season-best on the 3-meter board by over 30 points to 199.50 to finish second.

The `Runners will return to action next Saturday in Las Vegas, Nev. CSUB is set to square off against UNLV on Oct. 21.

The Pacific men’s and women’s swimming and diving teams put forth a strong effort against Cal State Bakerfield.

The Tigers’ men’s team finished just short of a team victory, falling by a score of 154-134. The Tigers combined for six, first place finishes, including wins in the 200 Medley and 400 Freestyle Relays. The 200 Relay team, made up of Makoa Haneberg, Yahav Shahaf, Mason Miller and Stewart Harrison, finished with a time of 1:31.16. In the 400 Freestyle Relay, Harrison, Josh Owens, Austin Crump and Danny Larson combined for a time of 3:04.52.

“We didn’t have any men’s divers entered for today’s meet so I am really happy with how strong we performed in swimming. Our team fought hard and we definitely showed our strength in the relays as we finished one-and-three in the 200 and one-and-two in the 400,” expressed head coach Peter Richardson.

Peterson added, “It is about racing tough in the fall.”

“I was happy with how some of the younger guys like Danny Larson and Michael Kang competed today. Both of them as well as Daniel Toy had a great meet,” added Richardson.

“On the women’s side we were missing five impactful swimmers, which makes up 20 percent of our team, so that definitely effected our depth in today’s meet. That being said I was proud with how we competed, especially in the Breaststroke,” said Richardson.

Competing for the women’s diving team were Alexis Albanese, Lillian Sam, Irene Kuang and Isabelle Huynh. In the one-meter dive Albanese recorded a second place finish with a score of 171.07. Sam was fifth (75.15) and Kuang was sixth (71.10). In the three-meter dive, Albanese was fourth with a score of 114.82.

“I am really proud of our how our young divers competed today,” added Richardson.

Pacific will take a week break before returning home to Chris Kjeldsen Pool to host its annual Pacific Invitational. The event will begin Friday, Oct. 27 at 7:00 p.m. and will conclude Saturday, Oct. 28.