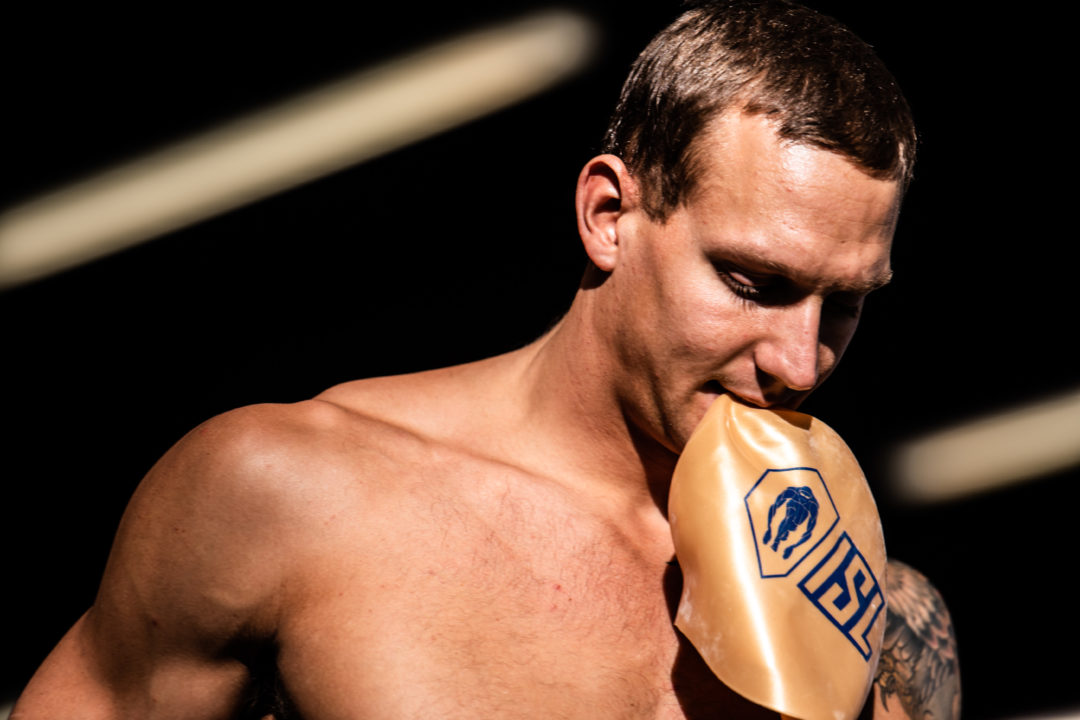 The Cali Condors top the overall club standings through week 2 of the ISL but several teams will be in the water this week to try to topple the leaders. Current photo via Mike Lewis/Ola Vista Photography

The NY Breakers were ahead of Iron nearly midway through the meet, before Iron’s Emre Sakci‘s win over Marco Koch in the 100m breast, with a jackpot included, turned the tide in Iron’s direction for the remainder of the meet. The squad’s runner-up status was further solidified by Sakci taking the men’s breaststroke skins.

Looking at the bigger picture, the Condors remain ahead of the entire league in terms of season club points, holding a 2-point advantage over Iron and LA Current.

However, London Roar, Energy Standard, Tokyo Frog Kings and Toronto Titans have only contested one match apiece, meaning we’re not exactly comparing apples to apples for team standings until all squads have raced the same amount.

We’ll get clearer vision after week 3, with Iron and Cali Condors having a bye week while the other matches move ahead as follows:

looking at the schedule – https://swimswam.com/isl-announces-full-schedule-finale-to-take-place-in-late-november/ and wondering how ISL come up with this schedule.

First notice that ES and LON won’t race against each other in the first 5 weeks. Turn out Condors also won’t race Titans in those prelim weeks…
LAC, NYB, DCT, TOK, AQR and IRO all get to race the other 9 teams, while London Roar will only meet 7 of the 9 (missing ES and Titan), as well as Titans also race 7 team and miss London Roar and Condors.

Right now, the Titans after one match is at the bottom. If they don’t get to Semi or final, maybe they really will have missed Roars and Condors completely in the whole series!

There’s at least one thing that seems to have happened on purpose: Tokyo not starting until week 2 so they could come after their Nationals.

After that, I could cynically connect some dots, but it wouldn’t be anything provable. Nobody I spoke to knows how scheduling was done. In every other major sport league in the world, especially those with imbalanced schedules, there’s an explanation. Everyone knows why you face certain teams a certain number of times.

Couldn’t agree more Braden. Had me head scratchin’ too – but nothing provable.