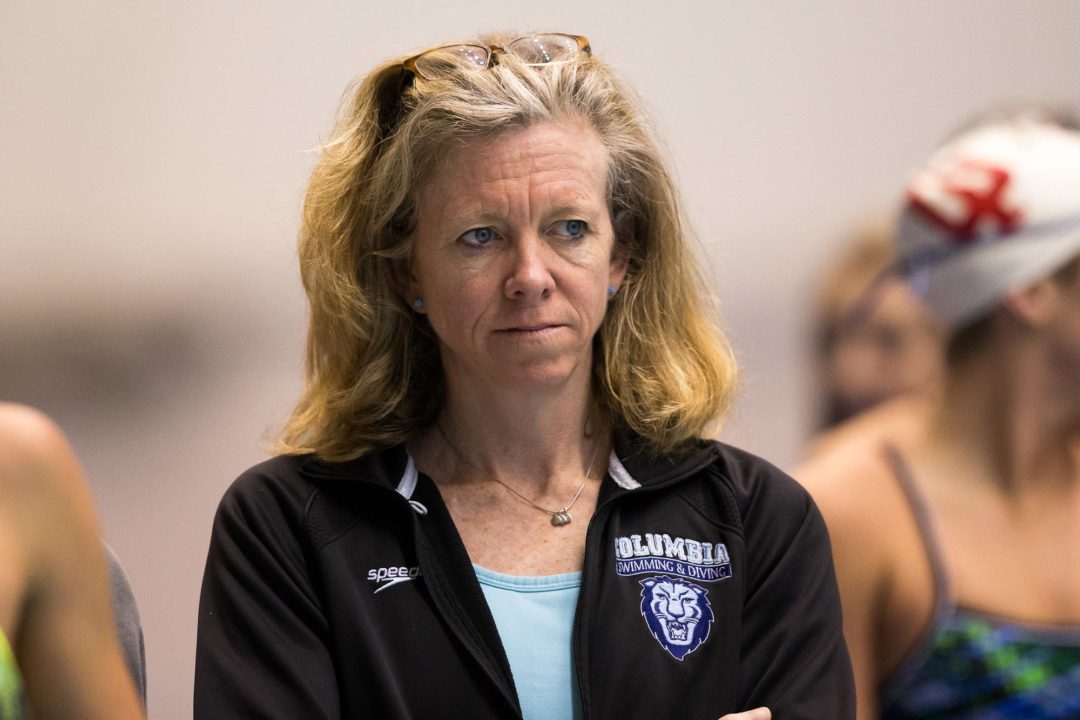 Diana Caskey, who led Columbia women's swimming and diving to a program-first Ivy League dual meet title in 2013-14, is on leave.

Columbia University announced it had hired Caroline Lukins as an assistant swimming coach for the upcoming 2014-15 season. Head coach Diana Caskey is on leave and Michael Sabala, previously associate head coach for women’s swimming has been promoted to acting head coach. After we initially publishied this article, Coach Sabala confirmed the situation. According to Sabala, Caskey shared the following statement with the team, alumni, and friends of the program:

“I love coaching at Columbia University. I love coaching our team. Taking this leave of absence is the best thing for my family and me at this time. I am healthy, I am well, and I am grateful to be able to give my full attention to my family in the next six months. Dr. Murphy, our Director of Athletics, has been very supportive in helping create this leave opportunity for me and I am tremendously grateful to have her support and guidance.”

Diana Caskey has had 22 years as the head of the women’s program at Columbia since taking over in 1992. Caskey made a name for herself when she recruited Olympic gold medalist Cristina Teuscher to join the program. Most recently she coached 2013 Columbia graduate Katie Meili who is now swimming in the postgrad program at SwimMAC. The 2013-14 season was arguably her most successful ever as a coach: Caskey took her team to a first-ever dual meet title with a 7-0 Ivy League record. That included Columbia’s first win against Harvard and third victory over Princeton in as many years.

Michael Sabala has been part of the Lions’ program since the 2006-07 season, when he began as volunteer coach. He was appointed assistant coach in 2010, then elevated to associate head coach in 2013. Sabala has been the Lead Coach for the Performance Club of the Columbia Varsity Swim School since August 2012. Sabala swam for Harvard, graduating in 2002.

This article has been updated since its first publishing.

I am curious…I have heard Michael is quite “aggressive” with his recruiting tactics…
Diana is a fantastic coach and I hope she is not being pushed out?!?

diana’s adored at columbia, I seriously doubt that’s the case

No one is being pushed out.

We have learned that Coach Caskey’s father has some health issues. She is taking six months off in order to spend time with her parents and is expected back in January.

any news of caskey’s return?