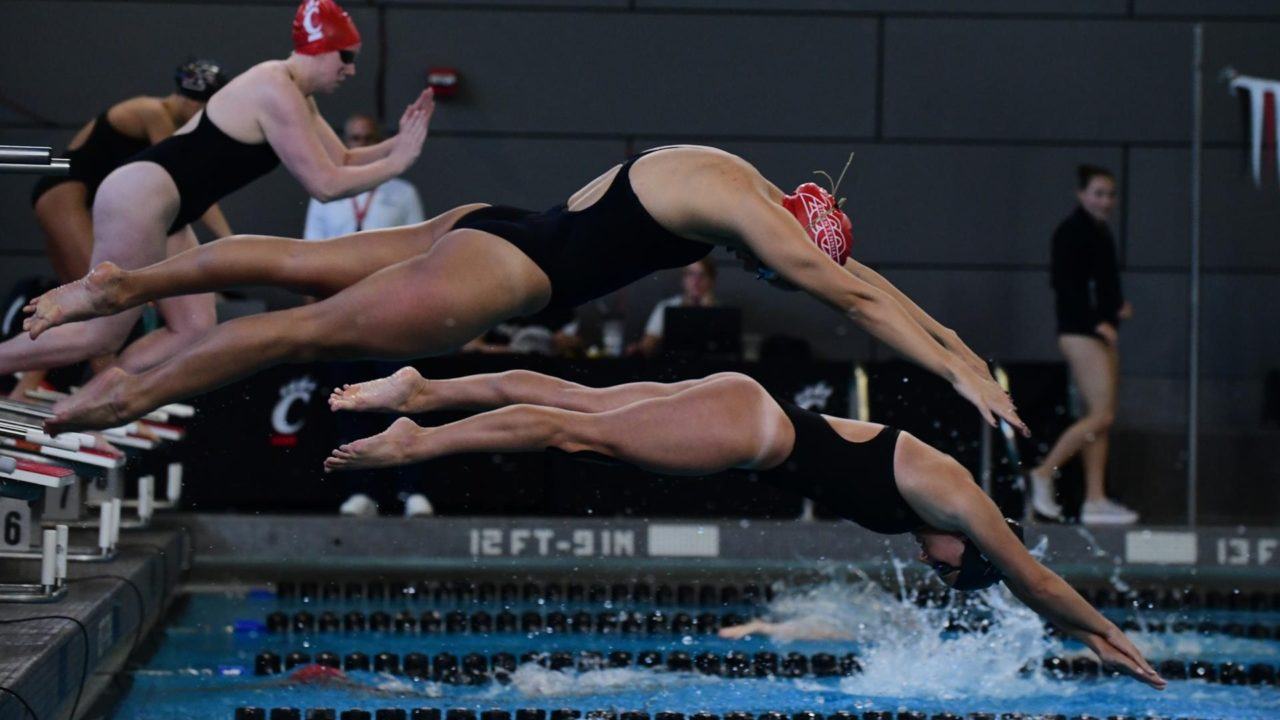 GAMBIER, Ohio – The University of Cincinnati swimming and diving swept Kenyon on the road Friday night with the men winning 142-101 and the women won 156-87.

UP NEXT
• UC returns home on Saturday, January 26 for Senior Day against Northwestern
• The final meet of the regular season will be Friday, February 1 at home against Kentucky

GAMBIER, Ohio – The Kenyon men’s swimming and diving team fell in a close dual meet against Division I University of Cincinnati on Friday night at James A. Steen Aquatics Center. The Bearcats won 142-101 as the Lords celebrated their senior class in front of a good crowd.

The Lords started “Senior Day” with a victory during the 200-yard medley relay. Ben Baturka, Robert Williams, David Fitch and Cole McMahon-Gioeli teamed up and finished the race with a ‘B’ cut qualifying time of 1:31.01.

A few events later, a pair of Kenyon swimmers tied for first in 50-yard freestyle. Weston Carpenter and Fitch each posted 21.11 times and pushed the Lords’ lead to 44-30.

Senior Ryder Sammons then notched the team’s final individual win. On the 1-meter board, Sammons registered 276.22 points. He followed that up later with a second-place showing on the 3-meter board.

During the last scored event of the evening, the 200-yard free relay, the Lords bagged first again. McMahon-Gioeli, Fitch, Tommy Weiss and Marcus Hong were sixth-tenths of a second faster than the Bearcats’ “A” team as Kenyon’s group finished in 1:23.69.

There were also numerous second and third-place marks for the Lords.

In the 1,000 freestyle, Bryan Fitzgerald and Connor Rumpit were second and third, respectively. Williams and Grant Thompson followed a race later in the 200-yard freestyle in the same slots.

Then in the 200 individual medley, Luis Weekes claimed runner-up with a time of 1:51.08 while Mick Bartholomew finished in 1:53.96. Both of those marks also met NCAA ‘B’ cut standards. Later, Bartholomew took home second in the 200 backstroke.

Rounding out Kenyon’s best performances was Fitzgerald’s second-place showing in the 500 free, Weiss’ runner-up finish in the 100 free and Humphrey Pruett‘s bronze finish in the 200-yard breaststroke.

Hosting its final home dual meet and celebrating Senior Day, the Kenyon College women’s swimming and diving team chalked up three event wins during Friday evening’s 156-87 loss to the NCAA Division I Bearcats from the University of Cincinnati.

One of the three Kenyon victories came from senior Hannah Orbach-Mandel. In the second event of the evening, Orbach-Mandel won the 200-yard freestyle in a time of 1:52.07. She edged teammate and junior Kendall Vanderhoof, who claimed the runner-up spot with a time of 1:52.75.

Later in the meet, Orbach-Mandel placed second in the 100-yard freestyle by clocking in at 52.29. Vanderhoof then tacked on another second-place showing for Kenyon, as she posted a 5:02.14 in the 500-yard freestyle.

Sophomore Crile Hart also cranked out some impressive results. She won the 200-yard individual medley and later placed second in the 200-yard backstroke. Her respective times in those two events were 2:04.83 and 2:03.23.

Kenyon’s other event win occurred in the first race of the evening, the 200-yard medley relay. Hart teamed up with Andrea Perttula, Caylee Hamilton and senior Abby Wilson to claim victory with a time of 1:45.19.

Other notable results came from Emmerson Mirus, a sophomore, and Wilson, who placed second (24.11) and third (24.12) in the 50-yard freestyle. Mirus, Wilson, Hamilton and Orbach-Mandel then finished off the competition with a second-place showing in the 200-yard freestyle relay (1:35.23).

Next on the schedule for the Lords and Ladies is a quick trip to Ohio Wesleyan University on February 1 for a 6:30 p.m. meet. After that, Kenyon will focus on the North Coast Athletic Conference Championship.