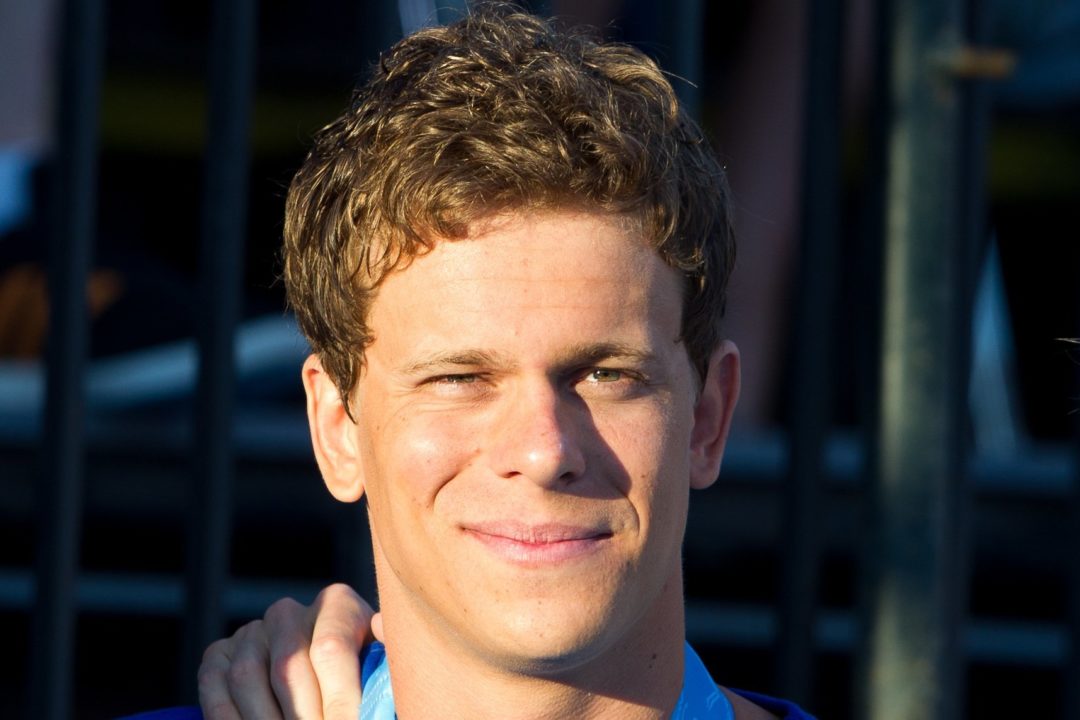 This results says that Cesar may have missed his taper in London. (Photo Courtesy: ©Tim Binning/TheSwimPictures.com)

After a slow first day at the 2012 Jose Finkel Trophy, Brazil’s short course (25m pool) National Championship counterpart to the more famous Maria Lenk Trophy, Cesar Cielo made sure that there was no yawning on Tuesday evening  in Sao Paulo.

That’s because he was a 20.59 to top the field in the men’s 50 free. That’s faster than anybody has been since the rubber suits went away, and the 10th-best performance of all-time. It just missed the textile-best, owned by him, of 20.51 seconds.

Despite not winning any gold in London, Cielo is still the most popular swimmer in Brazil, and this swim showed why. There has been much concern in his country that he was overtrained in his final cycle headed into the Olympics, and this scorching time three-weeks later would seem to support that theory.  Since the Olympics, where he underperformed, Cielo has told the local media multiple times that he’s not even going to race the 100 free at Worlds next year, instead focusing on just the 50 free and 50 fly (both of which he’s the defending champion in).

Nicholas Santos, one of the 10-fastest short course performers in history and Cielo’s club teammate, was 2nd here in 21.53. A 1-2 finish for Flamengo is a huge boost to their team total in a meet that resembles the NCAA in the level of focus on team results.

Minas was buoyed by the first major contribution from an international swimmer at this meet (each team is allowed to hire two) when the Netherlands’ Inge Dekker, also off of a somewhat disappointing Olympic performance, won the women’s 50 in 24.15. Though not officially a record, by being faster than the South American Record in the event, she picked up a whopping 70 bonus points (in other words, the equivalent of two event victories). Australia’s Marieke Guehrer, hand-picked by Cielo to join his team along with countrymate Kelly Stubbins, was just behind in 2nd in 24.26. Neither time is spectacular, but given the timing of the meet and the travel involved for both athletes, bettering their top marks from last season and contributing big team points will be more-than-satisfying.

The top-placing Brazilian was Fluminese’s Alessandra Marchioro in 24.76 for 3rd. She is very tall at roughly 6’1, and only 19 years old, so the Brazilians consider her one of their top female prospects (of which there aren’t many).

Thiago Pereira, Olympic silver medalist in the 400 IM, won that event here in a new Championship Record of 4:01.91: one of the 20-best performances in history.

As for the first day of action, there were only a few notable times.

In the women’s 200 backstroke, Dekker’s countrymate and for the week Minas teammate Femke Heemskerk won going-away in 2:04.72 for another 70-point bonus. Heemskerk is a strong 100 backstroker, but rarely stretches to this 200 distance. Though out of her comfort-zone, and a few weeks after her taper, that time was within 6-tenths of the Dutch National Record in the event. Heemskerk on Tuesday also won the women’s 200 free in 1:55.43, again clearing the South American Record for more huge bonus points.

Flamengo fought back again at the end of the session by sweeping the closing 4×50 freestyle relays. That kept them close as they emerged from the first day of competition in 2nd with 796.50 points. Minas was ahead, but just barely, at 809.

There were other wins by big-name swimmers, though none in particularly impressive times. Leonardo Dos Santos won the men’s 200 back in 1:53.99, and Gabriel Souza bettered Tales Cerdeira in the 200 breast in 2:06.82.

Flamengo kept the scoring close 0verall by jumping out to a huge lead and sweeping the 4×50 relays on Monday.

They really need to add the three other 50m events to the Olympic swimming program. For true sprinters, a 100m race is a grueling endeavor comparable to participating in an Ironman triathlon. As demonstrated by the sizable time difference between the 200m and 400m in running (whereas the 200m is almost exactly the 100m X 2 in regards to time), the human body is not designed to operate at maximum speed for much more than 20 seconds, regardless of how much training you put in.

You just know that Cielo would crush Phelps in any 50m fly swim-off.

Agreed. Training for the 50 and 100 are totally different animals, particularly LC. The days of being multifaceted (ie Phelps) and training for all events will soon be at an end. Swimming is becoming more specialized.

Cielo lost the 50m race in London because he was “nervous”. He couldn’t handle the pressure. Right before the start, he didn’t have his usual confident look: then I knew he wouldn’t win. He was prepared, and his taper was right. It was a mental thing. He “amarelou” (“chickened”) as we say in Brasil.

Nadador, i disagree. For me(IMHO), Cielo preparation was very wrong in the end.In the last 4 years, around a month before his goal competition, he is in a training phase of lowering process.Sometimes, he makes a last meeting semi-rested where he tests his form shape(like Paris Open).This year, he made a different strategy at the end of June, going to Setti Colli and doing two heavy swims:22.17 and 49.09 .These times are almost times when he opened the year(22.18 and 49.5).And ALL pro 16 athletes(with exception of Pereira and Cerdeira-who was training just light craw till 3 weeks before Games because of his injury) are very bad at setti colli and no good at Olympics.You probably didn t see, but… Read more »

Look: I could see in his face that he was nervous…Do you know when you just can tell when an athlete is going to amarelar…

Even being nervous, that dont explain bad start, turns and finish in past events.In 50 free semis, he lifted his head before touch the wall.Cielo was a lot dispersive in London.He trained a lot more than past year, even with a new diet(gluten free like Dana Volmer).Cielo delivery in 50 free even in past Worlds with all that pressure of doping case, and almost 10 pounds lightier than he should be.All pro16 sprinters failed in London.
I sustain my opinion: late lowering training process schedule burned them.

Cielo will have the greatest weight on his shoulders come Rio. he better start preparing now, but this looks like a good sign.

Rio will be an once in a lifetime meet for brazilian swimmers.. and they probably prepare for it… London was pretty much disappointing considering the results before the games.. but at least there are some signs that some new atheltes are rising (some pretty much unknown of media despite having superb times for their ages) with good prospects for 2016…